Submitted to It’s Going Down……   LOOK, Los Angeles is getting a lot of attention for the 750,000 participants of the Women’s March. In all the reports there is not one mention that, for the last two days, breakaway marches have stormed DTLA. LA often gets passed over in report-backs that list things like these anti-Trump protests because politics here tend to be very localized and are not necessarily in a coded political framework. But folks in LA are lit and deeply tuned into the way speculative capital is destroying our city.

The first day was a march against the parade of nonprofits: forty organizations working together, from Code Pink to Union del Barrio to ANSWER. Though they gave many speeches their words rang hollow on a crowd that had heard it all before. It became obvious that the crowd wanted to have a march that was not in collaboration with the cops or the state. Some rowdy kids––queer, trans, black, brown, and white––grabbed the megaphone and announced that we should march. And so we did.

The subsequent break-away march tapped into people’s contempt for the tendency that stale-ass institutionalized organizations have of telling them what to feel. A young women took to the mic and cried: “Progression is repression. I didn’t want to sit through all that shit. Let’s get moving.” The crowd cheered. We handed out 100 bandanas and people received them ecstatically.

From there, the march went the men’s county jail where people got on the mic to shout out to their people locked up. A woman spoke directly to her sister inside the jail, started crying, and got the crowd crying with her. Lights were flashing on and off inside the jail. They saw us and heard us.

Huge Crowd Of 750K Attends Los Angeles Anti-Trump Protest
As usual there were some white bro dudes trying to kill the vibe, acting as peace police by stopping people from taking the freeways or undertaking direct actions. By the time two cars tried to run us over though, the march had crescendoed to an antagonistic unity. Without hesitation, the mob stormed Union Station: a transportation hub for Southern California. People cheered us on as we tore through the station disrupting Amtrak, Metro, and Metrolink schedules, and tagging the walls. It was dope. There was one arrest so stay tuned for support. 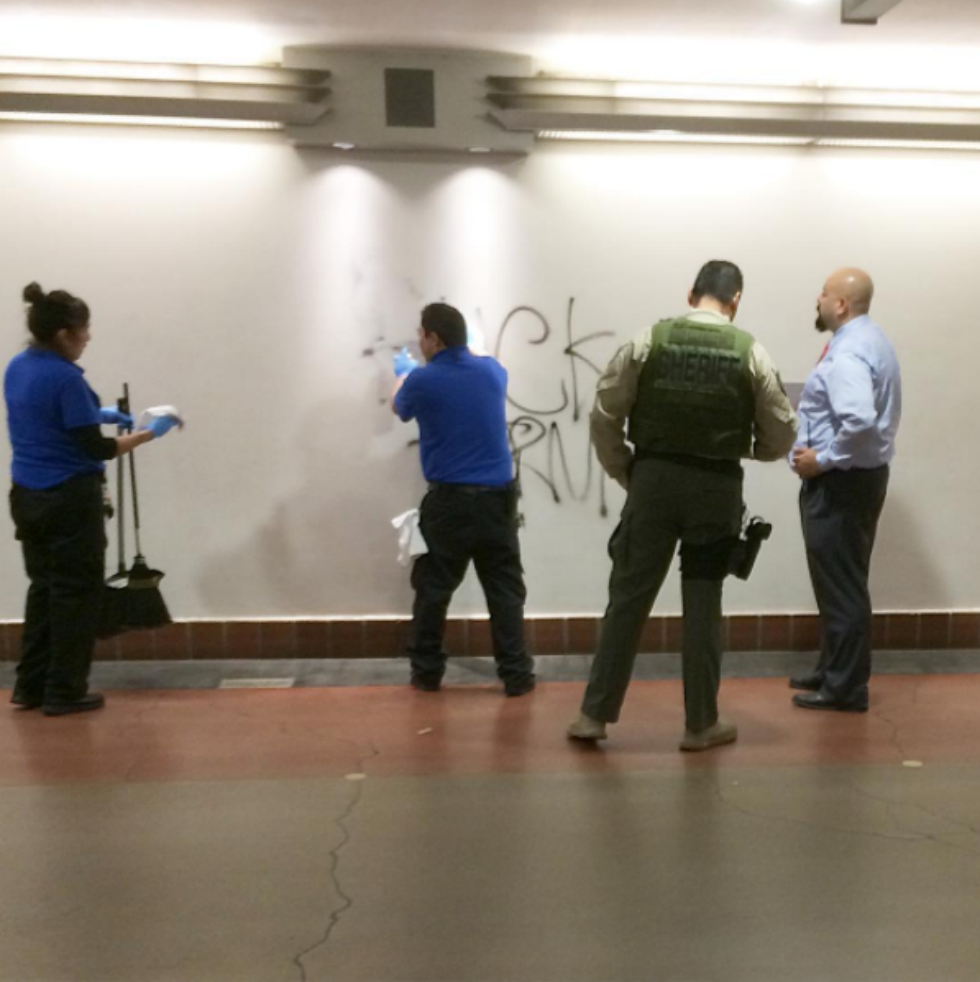 The breakaway march from the Women’s March was more lively than the previous night. This was probably due to the lack of white male entitlement, and the lack of “experienced protesters,” who had a specific idea of the way they wanted things to be. Just like the day before, the kids’ energy was overflowing the Women’s-March-vibe-container.

A sound system rolled up to a crowd of 500 people hanging around the steps of City Hall. There was a super cute femme dance-off to Beyoncé’s Formation. Someone gave a speech that got the crowd going about how to take the message of Formation to the next level. A young woman cried out: “This is what you read about in the history books!” There was consensus that we should march until the sun goes down––and by sun we mean government––but that marches would not be enough.

We briefly got on the freeway a number of times, but the cops have gotten very nimble with their motorcycles. The freeway entrances would be completely empty, and as we would get onto them, four or five motorcycles would swoop in and cut off the march. Perhaps a more militant group could likely have run right through the line. We will see a lot more of this tactic moving forward. As well, bicycle cops have taken to throwing the bikes down to form a barricade and coming after people on foot. This was a scary thing to confront, but it also presents an opportunity for someone to take a bike in the future as a projectile or a nice gift for a friend. A couple of cops on foot got shit thrown at them. In general they were pretty easy to duck and weave and whenever we confronted a line of cops, the vibe in the crowd was “LET’S DO THIS! WE GOT THIS!” even if we were cornered. [1]

There was, sadly, a “Jesus dude” wearing a Baby Bjorn (complete with baby) verbally assaulting us and invading people’s personal space. He kept putting his hands on us (“he’s just trying to love on people!”) until we told him we fucked Jesus and aborted his child. He continued to harass us until we pantsed him and a young woman punched him: #ImWithHer.

We mention this guy as a way to point out that this women-led march was still rife with basic misogyny, but that that misogyny was fiercely confronted. Women were the ones with the sound system, getting on the megaphone, stopping and directing traffic, smoking blunts, and pushing the boundaries of the crowd and the cops. From our femme perspective it seemed like as we slid in and held the power that some men wanted the power back and tried to tell us what to do. It didn’t work.

We walked through Union Station again and hit a cop blockade on Vignes Street where they tried to attack people with their batons. Undeterred, our resilient crowd took advantage of Union Station’s many exits and the cops had difficulty trapping us into the maze. It took feeling out every option, continuing to move, and refusing to let ourselves be kettled despite their many attempts. Eventually we forged a path out––seemingly by sheer will. The music never stopped. Blasting ‘Killing in Name Of’ at a yuppie wine tasting in the “Historic Ticketing Hall” was a notable highlight. 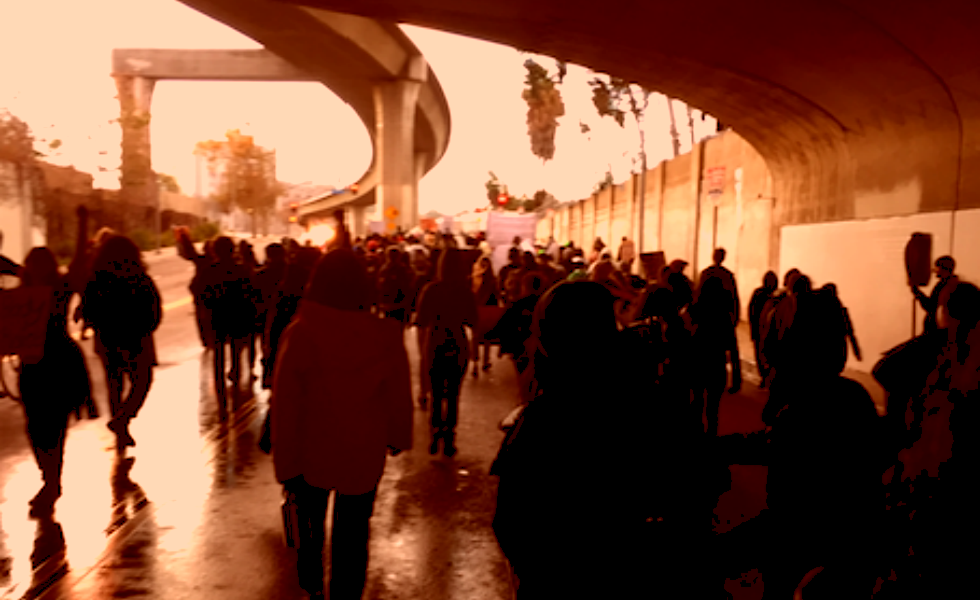 We are taking this moment to record these events because it felt like an important beginning. We are deeply optimistic about the future of revolt in Los Angeles and hope that this message shows how the kids are fed up with representation by non-profits, institutionalized organizations and stifling self-serving leftist infighting. BOOM. They’ve never been able to fix a broken clock. They’ll never be able to contain our rage. We are UNGOVERNABLE.

THE KIDS ARE ALRIGHT. LONG LIVE THE KIDS.

IN SOLIDARITY WITH THE ONGOING INSURRECTION IN MEXICO

DONATE TO HELP US GROW AND EXPAND!    It’s Going Down

One thought on “GIRLS RUN WORLD: A REPORT BACK FROM LOS ANGELES”