The republican project materialized in a period of eight years and that culminated in the end imposed by the uprising of the military and the victory of the national side. The years of dictatorship ended up burying the republican experience, which was then a silent memory.

With the end of the Franco regime and the beginning of the democratic transition, many voices are clamoring to recover -either in the form of homage or as a reference to build a future- the iconic date and the referents that laid the foundations of its foundation.

Today, more than eight decades after the streets were bathed in the three colors, citizenship, political parties, institutions and social movements remember the proclamation of the Second Republic through acts that are distributed throughout the map and that express the particularities of each people in their tributes.

Catalonia is especially active, with the Republic already declared, with or without the rest of Iberia, and a vicious State Repression in full swing. In Barcelona a 24 hour march was under way in continuous rain.

Demands are for freedom for political prisoners and an end to persecution, especially the prosecution as terrorists of the Republic Defense Committees (CDR’s), a network of autonomous horizontally organised groups on the lines of those who organised the Spanish Revolution in 1936.

Arrests of protestors deemed terrorists for blocking roads when the political leaders were arrested began. The ruling party congratulated the paramilitary police, while protesters broke through a police cordon and encircled the parliament. The three pro-independence parties in the parliament said the arrests amounted to “judicial persecution” of independence supporters by Spain’s central authorities.

Pablo Iglesias, leader of the left-wing, anti-austerity Podemos party, said that while activists had been arrested, “hundreds of corrupt individuals enjoy impunity”. He added: “The only thing missing is to accuse them of shooting Kennedy in Dallas.”

continued from above ..Izquierda Unida (United Left, ex communist) moved the date to the Congress of Deputies in the form of interpellations. The formation registered this Thursday a battery of questions directed to the Government related to the operation of the House of the King, among other questions. The party of Alberto Garzón also took advantage to reiterate his demand regarding the convocation of a referendum for citizens to choose between a monarchy or a republic as a state model.

As for the Socialists, their youth branch has also been inclined to hold a consultation of the same characteristics. They aspire to achieve “a referendum that, once and for all, seriously and maturely poses the possibility of becoming a Parliamentary Republic.”

Juventudes Socialistas (Young Socialists) has maintained in its communiqué that currently “democracy suffers setbacks and attacks from several fronts: the corruption of politicians and politicians who now also lie with their curriculum, the parasitism of the Royal House and its budget increase every year”.

The PSOE (Socialist)leadership, however, has refused to second the words of its younger ranks. “I hope they are to other things,” said Secretary of Organization of the PSOE, José Luis Ábalos.

The initiatives that took place across the country have a series of particularities and a common goal: to recover the memory of those who built the Republic and those who were victimized by the Franco regime.

The León town of Sahagún, along with Eibar (Gipuzkoa) and Jaca (Huesca), will celebrate for the first time a twinning for being the three cities that were one day ahead of the proclamation of 1931. The initiative is part of the Socialist Association of Sahagún. The three locations have agreed to hold various activities on Friday and Saturday in conjunction with the date. The bulk of the celebrations will take place on Saturday in Eibar, with a hoist of the Republican flag in the House of the People, a political act and a popular meal.

In Elda (Alicante), a permanent exhibition of the staff of Manuel Azaña, president of the Second Republic between 1936 and 1939, was inaugurated on Wednesday. The vara, whose presentation was presented by the former president José Luis Rodríguez Zaparero, has come to occupy a space in the lobby of Elda City Hall, the last seat of the Republican government between February and March 1939.

The memory of the victims of the Civil War and the dictatorship is also configured as the backbone of the tributes that will take place in the country. In Puertollano (Ciudad Real), socialist and IU youths have come together to read a manifesto that contains the names of the victims of the region who lie buried by the national geography.

León will also pay homage to those shot during the Franco regime on Saturday, in a ceremony attended by the vice president of the European Left Party and member of the IU leadership, Maite Mola. The event will be held at 11:00 am in the firing range of the Puente Castro neighborhood and will continue in the León cemetery.

Barcelona , meanwhile, republished for the third consecutive year its Republican Spring, with Saturday as the initial day and with the organization of events that seek to “evoke republican values ​​of freedom, equality and fraternity”. The events will include a floral offering in the Plaza de la República and a popular party on Sunday in the new street of Pepe Rubianes. 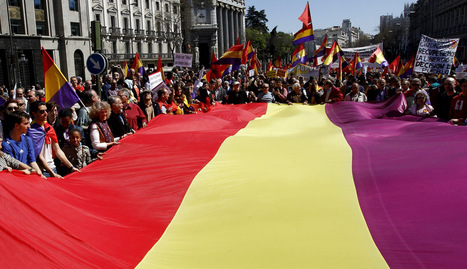 The city will also host historical symbolism and memory in “emblematic locations linked to personalities, historical events and representative places.”

Also the City of Santiago de Compostela organizes on Saturday a tour of the most important places of the city during the Republican stage from a double perspective: “The history and memory.” Gijón gave the kick-off to the events Last Tuesday. Recitals and screenings have been paving the way to the floral offering that took place on Saturday at 12:30 pm, followed by talks, popular meals and concerts  throughout the day.

The town of Paiporta (València) ) hosted last Wednesday the premiere of the II Conference on Historical Memory, with the presentation of a research book on the Second Republic, the Civil War and the dictatorship in the town. The Department of Culture has designed a series of events to be held throughout the month and include exhibitions, film screenings, theater and conferences that will last until April 20. 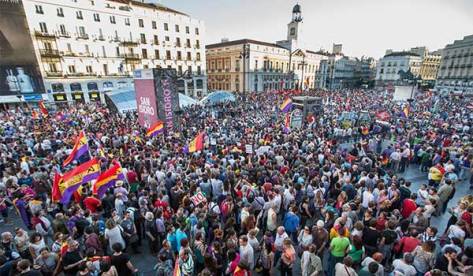 This Saturday there was a guided tour of the anti-aircraft shelter of the Civil War of the City of Valencia. Other locations such as Pamplona have also added to prolong the activities around the date. Thus, the capital of Navarra on Wednesday organized a debate on “the freedoms, the degradation of this Constitution and the need for a new” in what was set as the start of the Republican Week, organized by the Republican Left of Navarre and Left-Ezkerra.

On Saturday, as a central day, the city hosted a rally at 1:00 pm to “reclaim the republic as a form of State against the current hereditary monarchy.” In Palma de Mallorca, Government and Cort have organized the cycle Memòria i carrer (Memory and the Street), on the “political and associative effervescence” of the Second Republic, with the support of the Municipal Band of Music, the Federation of Neighbors and specialized investigators in the republican stage.

Since Wednesday, the conference hosts recreational activities to honor “the citizens who contributed to the creation and the structuring of a democratic culture.”

Demonstrations throughout the country

In Madrid, various groups and social organizations have called a demonstration “for the freedom of expression, the self-determination of peoples and labor and social rights “. The march departs from Plaza de Cibeles at 7:00 p.m. and finish at Sol. Among the conveners is the 25S Coordinator, the Republican Federation, IU and Estudiantes en Lucha.

The same dynamics will be reproduced in different points of the state territory. All the Andalusian provinces have called mobilizations to celebrate the anniversary, the great majority in the morning and under the motto “for the republic: bread, work, roof, equality and pensions.”

The tricolor and the city councils. Despite the common desire to remember April 14 as a historical date, not all are facilities for those who decide to honor that stage . The Contentious-Administrative Court number 3 of Pamplona has condemned the City Council of Burlada for raising the Republican flag on August 14 last year during the ‘chupinazo’ of the festivities, after having already been sanctioned after placing it on April 14 of the same year.

The justice considers that the exhibition “is not in accordance with the law”. The same has happened with the Valencian town councils of Xeraco, Barxeta and Buñol. Last year the government demanded to remove the tricolor from the municipal buildings of various territories. It was the case of the City Council of the town of Trebujena from Cadiz, which a year ago hung the flag on the facade of the consistory.

Despite the legal obstacles, municipalities such as Sabadell (Barcelona) have already announced their intention to wave the colors Republicans this Saturday. Also, representatives of IU in the city of Valencia have submitted a letter to the mayor, Joan Ribó, to request that the flag hang from the balcony of the town hall “as a sign of remembrance and tribute to all the people who fought, and even gave their lives , for defending freedom, equality and social justice “.

Last February, Unidos Podemos (United We Can) registered a bill in Congress to modify the Law of Flags so that, in addition to the official institutional flags, there is the possibility of hanging ones like the republican, the LGTBI flag or even that of sports teams without any type of penalty.