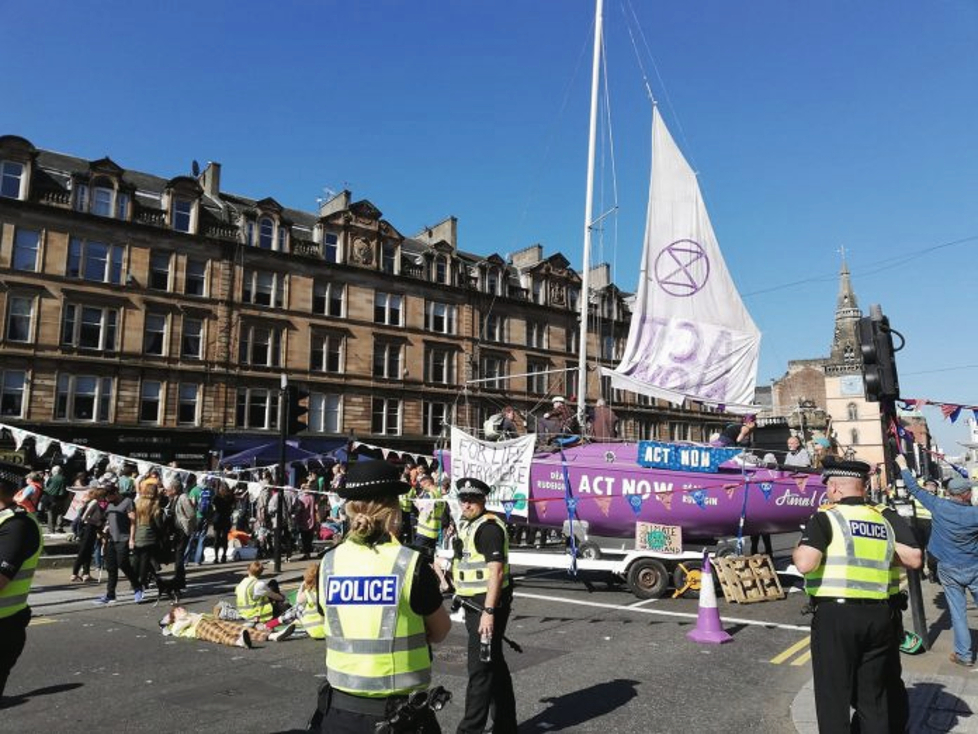 The youth strikers for climate have taken to the streets again today (Friday 19 July), at the end of a week of action by Extinction Rebellion (XR).

Establishment attitudes towards XR have been hardening. This week, a report co-authored by a former head of the Met Police’s Counter Terrorism Command warned of XR’s ‘subversive agenda… rooted in the political extremism of anarchism, eco-socialism and radical anti-capitalist environmentalism’.

July to be world’s hottest ever month on record worldwide 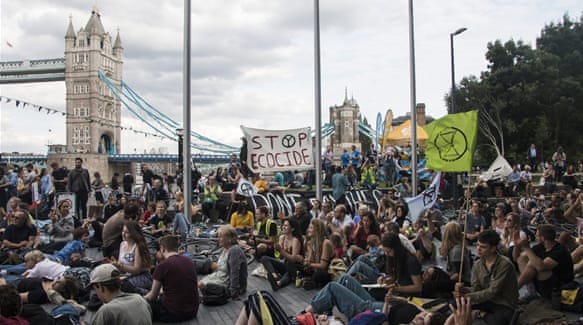 rs21 members have been getting involved around the UK, and trying to find out why XR has got the authorities so rattled…

Watch Al Jackson‘s video interview with an XR activist in Leeds who explained why people had set up camp for the week. ‘We can’t hide from the facts any more’, she said. ‘The people in charge…need to get moving, and if they don’t, it’s time for them to step down.’

Addressing climate catastrophe needs to be part of a wider vision for change: ‘We need a redistribution of finances anyway… We’re living in an unfair society.’

In Glasgow activists blocked its central Trongate street with a 25-foot purple boat. The boat is named Amal Gous, after the Sudanese activist and tea-seller murdered by the authorities during a sit-in in Khartoum.

Jamie Lewis attended the XR briefing the night before, along with about 100 other people. The format was top-down, with long briefings on getting arrested and on how ‘the police are humans too’, with less time for general political discussion. But the action itself was impressive, and there was lots of opportunity for discussion there, and loads of excitement about the climate strikes in September.

The actions in London this week have included a blockade on the site of London’s super-sewer, with parents and children from Riverside Primary School taking part. XR point to the enormous carbon footprint and the air pollution for local residents, and argue:

It is being constructed to alleviate raw sewage that enters the River Thames following heavy rain falls. The tunnel is what’s known as an ‘end pipe’ solution to a problem that is being faced in cities across the world. Other cities like Philadelphia and New York are taking a different approach known as blue/green infrastructure to stop the rain run off getting into the system.

Meanwhile, XR have been holding People’s Assemblies, such as this one at Hackney Town Hall, where Charlie Hore reports that around 60 people gathered to discuss demands for Hackney and for London, from the general to the specific. Among the more unusual suggestions was the idea of declaring London a National Park…

Plans for the climate strikes on 20 September were discussed, and people were receptive to arguments for the importance of both collective and individual action. Ideas seem to be very much in flux at the moment.

The youth strikers are now calling for adults to join them on a global strike for the climate on 20 September 2019. Download the rs21 leaflet here. See also this rs21 video and this article by Jonathan Neale with suggestions about how to organise a climate strike in your workplace.

The Campaign Against Climate Change is currently organising planning meetings around the UK in preparation for the September climate strikes. Check here to see when your nearest one will be.

Meanwhile, further actions are planned this summer. From 26 – 31 July, Reclaim the Power will be holding a mass action camp – Power Beyond Borders.

Join the camp and take ‘direct action this summer against the new gas fired power stations fuelling the climate crisis, and training up to take action on the UK’s Hostile Environment for migrants’.