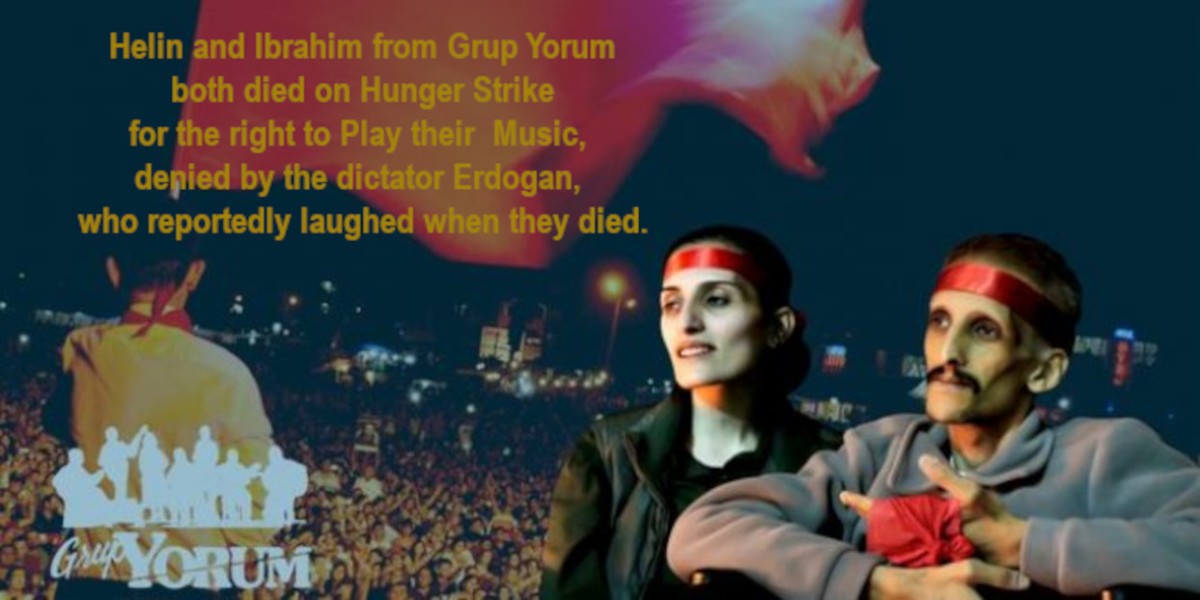 members of Yorum before the hunger strikes

Ankara’s crackdown on Grup Yorum, a folk collective with rotating band members, is continuing to expand even after three of its members died as a result of hunger strikes protesting the Turkish government’s treatment of the band, Turkish Minute reported.

Ibrahim Gökçek of Grup Yorum at the funeral of Helin Bölek who died first for the right to sing her freedom songs. Ibrahim – himself on hunger strike, died shortly after.

Known for its leftist stance and songs about human rights violations and freedoms in Turkey, Grup Yorum has been banned from performing since 2016, with some of its members having been jailed. Turkish authorities have accused members of affiliation with the Revolutionary People’s Liberation Party/Front (DHKP-C), considered a terrorist organization by Turkey, the United States and the European Union.

The latest police raid on the İdil Cultural Center, where Grup Yorum members have been conducting their activities, resulted in the detention of 93 people out of 120 for whom warrants had been issued, including the band’s lawyers and background singers in addition to its soloists and musicians, as part of an expanded crackdown in October.

Mustafa Koçak, a jailed member of the Grup Yorum band who has been on a hunger strike for 254 days in an İzmir prison, was removed from his cell and brought to a hospital where he was subjected to involuntary treatment as well as torture, the Bianet news website reported..Resisting to the last Mustafa Koçak  lost his life on day 297 of his death fast

Two other members of the folk band, singer Helin Bölek and bass guitarist Ibrahim Gökçek died earlier this year after a hunger strike in protest of the government’s crackdown on the band.

The 28-year-old Bölek died in April, on the 288th day of her hunger strike, while Gökçek died in May after fasting for 323 days.

Hunger strikers in Turkey traditionally refuse food but consume liquids and vitamins to prolong their protests.

Bölek and Gökçek started their hunger strike while in prison in 2019 to press the AKP government to lift the ban and free detained band members. They continued the protest after their release in November, demanding that Grup Yorum be allowed to resume concerts, other jailed band members be released and lawsuits against the group be dropped.

Helin before her death strike

Despite the death of Bölek , Koçak and Gökçek, the Turkish government still has not lifted the ban on the band’s performances.