A raised fist to you all this June 11th! May this letter find you in revolutionary health and spirits. Although I am unable to be with you physically on this occasion due to being held in captivity by the BOP, I still feel connected with you on this day of solidarity. It was nice to run the 5K with you a few days ago for Running Down The Walls. I also sent out a few dozen origami models decorated with June 11th anarchist tattoos; you should be receiving those shortly.

Big ups to the other anarchist comrades behind bars. We have been through a lot of trials and tribulations over the years: harassment from abusive guards, solitary confinement, diesel therapy, the mind-numbing frustrations from battling the brutal bureaucracy for so many years. Never have we been alone, however.

END_OF_DOCUMENT_TOKEN_TO_BE_REPLACED 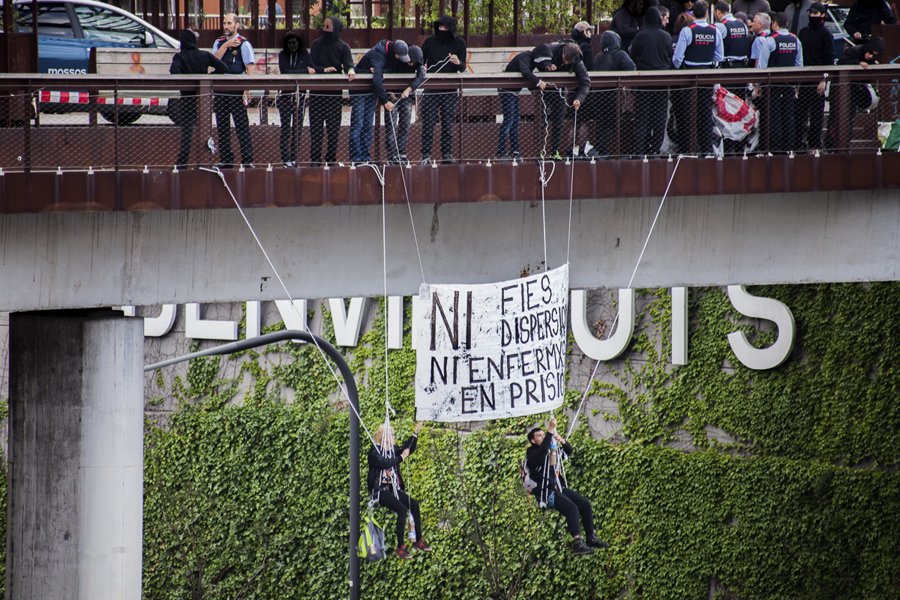 Two activists hang from the Sarajevo bridge in Barcelona in support of prisoners on hunger strike. They demand the elimination of  isolation and release  of mentally ill and chronically ill

A group of solidarity with the prisoners and victims on hunger strike  cut off the Meridiana exit to Barcelona, ​​in the direction of the C-17, and has unfolded a banner.

The Police arrested a person for “attack against agents of the authority”, according to the press service, and has been transferred to the police station of Les Corts. Likewise, they have restored the circulation and finally the firefighters have arrived at the place of the action to  get down the hanging demonstrators with a crane. The police identified the forty concentrates.

The action of this morning adds to the list of acts and days in solidarity with the hunger strike that since Tuesday by different groups of support for prisoners and prisoners which are taking place in different cities of Spain, such as Lleida , Santander, Palencia, Madrid, Gasteiz, Granada, Valladolid, Valencia and Barcelona, ​​and also during the first May demos in Paris and Toulouse, in the French State. END_OF_DOCUMENT_TOKEN_TO_BE_REPLACED

RESISTING PRISONERS  WILL START HUNGER STRIKE THIS MAY 1st

The distancing of prisons from cities and inhabited areas, the mental walls, the lack of conscience, the belief in a line between “the good guys” and the “bad guys” … we do not know what the reasons are, nor which of them has more strength so that we have reached this point, in which the people who are locked in the Penitentiary System, matter so little and generate this terrible lack of empathy outside.

We want to take out, for a moment, the voice of these people who are fighting. They themselves have written a proposal of collective struggle where they show “the situation in which we are systematically subjected to abuse of power, aggression, continued physical and mental torture, and inhuman and degrading conditions of existence in many aspects: medical-sanitary abandonment, labour exploitation, legal defenselessness, cultural discrimination, non-existent freedom of expression, etc. “

Faced with this situation; from within, from the incarcerated people, a proposal of Collective Hunger Strike has emerged to throw a ray of light on the normalized violence in prison, to reach “out”. END_OF_DOCUMENT_TOKEN_TO_BE_REPLACED

by Squat!net, shared with thanks!        This Thursday 3rd of August, 2017, in the morning, the cops have broken the doors of several rented and squatted houses in Florence, Rome and Lecce, to arrest eight anarchist comrades from Florence.

La Repubblica (Italian mainstream newspaper) says it’s the result of an investigation made by the DIGOS (Division of General Investigations and Special Operations) and the antiterrorist Italian police, regarding two events.

First, an explosive device was put in front of a fascist bookshop linked to Casapound during last New Year’s Eve, and the police bomb-disposal expert lost a hand and an eye.

Second, a Molotov cocktail was thrown against a Carabinieri barracks in Rovezzano (Florence) on 21st of April, 2017.

The cops say they have identified people via bugging telephones, tailings and samplings of biological material (DNA). END_OF_DOCUMENT_TOKEN_TO_BE_REPLACED

..”I am not a theoretician, but one of the oppressed, enamored with the freedom (and liberty) that infects the oppressed with the passion for a worthy life…” Gabriel Pombo da Silva,
Gabi was finally freed on June 10th 2016 and lives in Galicia but later rearrestyed and they want him to do 20 years more

The zine is written in Gabriel’s amazingly raw, imaginative style and shows why the German and Spanish authorities tried to suppress him forever – Read his words, be inspired and take action!!Titles of the chapters –

“A boy’s story”
“The escape”
“The trial”
“Letters from Gabriel”
“Diary and Ideary* of a Delinquent”
– Anarchy: A Permanent Tension with the Existent
– Rebellion, Rebelliousness, Social Rebel
– Informal and Diffuse Organisation
– Aesthetics and Ethics
– The Revolt
– Expropriation is Necessary
“International Day of Solidarity 07” (Chronology)

Like Loading...
from   Katja Lihtenvalner at Al Jazeera   shared with thanks   Athens, Greece – ………A cloud of tension hovered inside an Athens courtroom as an anxious crowd waited to hear the appeal verdict in the case of 34-year-old Tasos Theofilou, an anarcho-communist and novelist who has been in prison since 2012.

Several police officers suited in riot gear entered the room, while lead judge Ourania Papadaki warned the 200 solidarity activists and supporters who were present to remain calm in advance of Friday’s verdict.

“We find the defendant innocent of all charges,” Papadaki said, prompting tears of joy throughout the crowd.

His supporters chanted in unison: “The passion for freedom is more powerful than any prison cell.”

Three of the five judges ruled in Theofilou’s favour, while the other two voted to uphold his guilty verdict.

In February 2014, Theofilou was first sentenced to 25 years in prison after being found guilty of robbing a bank and killing a taxi driver on the Greek island of Paros in August 2012.

For half a decade, he rejected the charges against him, and many Greek activists considered him a political prisoner due to his involvement in the anarchist movement.

Disbelief was sketched across the faces of Theofilou’s parents, who were sitting in the front row.

“It’s impossible to believe it,” his mother said, smiling and visibly relieved as she hugged a handful of her son’s supporters.

On 7th June a  German court sentenced a Barcelona anarchist to seven  and a half years prison for robbing a bank in Aachen, Germany.  The other woman indicted was acquitted of all charges . The demo against the sentence begins at 8pm in Plaza Lesseps. Throughout the solidarity campaign, the support groups have made it clear that they do not care if the anarchists were to blame as they consider the expropriation action against the criminal banks to be legitimate.

info via insurrection news   and Solidaritat Rebel    The Aachener Bank   was hit for the first time in July 2012. Around noon, a gang ran into the bank and demanded money at gunpoint. Then they shut the bank employees in one room. One woman was  wearing a blond wig, sunglasses. They spoke good German.

The Dutch press reports highlighted that the German police had been harassing and seeking to arrest the Dutch woman who was later arrested and  dubbed by them and the predatory media as the ‘leader’ for years and she had previously been held for 5 months and released as there was no evidence.

There has been a worldwide wave of solidarity actions for those accused of the Aachen bank robberies, with reports from as far away as Greece, Russia, Brazil, Australia or Chile……….

The Dutch anarchists who demonstrated and continue to campaign for the release of the 3 described the charges as fabricated. The leaflets and declarations emphasize support for the arrested comrades whether ‘guilty’ or ‘innocent’ and some justified bank expropriations in the context of trillion euro bank fraud, capitalist extortion and planetary destruction. END_OF_DOCUMENT_TOKEN_TO_BE_REPLACED

Nahuel was held hostage and punished for nearly 500 days without trial for opposing drugs, fascism and Carnivorous Capitalism

By ..Writing Team of Libertarian Regeneración

From here we send a strong greeting to Nahuel, and also, of course, his family, who unfortunately have had to go through this inhuman situation and vengeful repression. 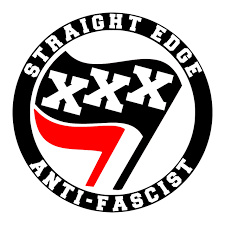 They have become a human example of struggle and solidarity. Now it is time to take care of yourself, Nahuel, and enjoy freedom while you continue to prepare the defense of the judgment to obtain total absolution.

Today from the writing team of Regeneration we want to publish this little note, showing our excitement about the release of comrade Nahuel. He had been in jail in Aranjuez until yesterday, having passed through other prisons previously, and since November 4, 2015 when he was detained along with other colleagues of the group Straight Edge Madrid in the framework of the Police Operation Ice. END_OF_DOCUMENT_TOKEN_TO_BE_REPLACED