This, along with Arab League failure to endorse, French backing off and a snowballing anti-war campaign at home MAY BE ENOUGH to stop the US attacking Syria.

Bad news for US corporations and the arms market. Bad news for the Israelis, for all the imperialist, racist and sexist warmongers who get hot on the idea of blowing people to pieces for their own profit and prestige.

Of course Assad is a dictator, but losing this war can only replace him with a new civil war and an even worse islamist theocracy, the progressive ‘Syrian Revolution’ is already only a minority in the sectarian Saudi and US backed rebel armies.

The only ”US interest” is dominating the region and preparing the next war against Iran. They care nothing for the 355 nerve gas victims. When the Egyptian army massacred over 1000 civilians supporting  democratically elected  president Morsi, just 2 weeks earlier, they did not even cut back on military aid.

Now with any luck Obama will have to back down. The attack  is shaping up as the USA vs the rest of the world.

Now is the time for  international talks to stop supplying arms  to both sides and a strong UN effort to force and bribe all parties to an agreement. 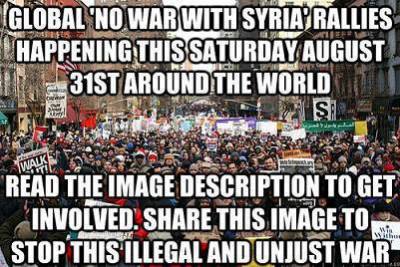