Christmas 1914: When rank and file imposed a truce during Imperialist War    by Henry Hagins  and John McCutcheon.

Workers.org, The “Christmas Truce of 1914” was a short-lived, unofficial lull in combat between two antagonistic rival forces, determined to exercise military, political and economic supremacy over each other in Europe and in the colonized world, to which these imperial powers lay arrogant false claim.

One of the bloodiest episodes in human history, World War I was largely played out on the battle-scarred lands of France and Belgium, starting in August of 1914. END_OF_DOCUMENT_TOKEN_TO_BE_REPLACED

23: 52 Update:  activists arrested in Puçol, Valencia, have been released with charges.

22: 00 Update:  activists that blocked the Leopart battle tanks under arrest in Puçol, Valencia. 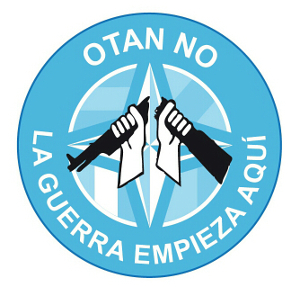 “Retreat is the only honourable military maneuver”, Boris Vian

TAKE THE LETHAL TOYS FROM THE PSYCHOPATHIC BOYS

In Oct and Nov 2015, the US is holding, via NATO the biggest ever war games, as a complement to its nuclear provocation against Russia and China and sponsored wars around the globe. Not only do we have to pay billions for this psycopathic bullying but it makes us all targets of thermonuclear warheads.

This is an opportunity to show our resistance however we can.

These are some demonstration callouts already from the Iberian peninsula:

The final logic of Capitalism is war. The excuse of a ‘chemical weapons’ in Syria is as false as Saddam’s secret weapons. This time round more millions of innocents will die, to boost the profits of the US ‘War Economy’ Corporations who control the US Congress. This time round there is little protest, nobody believes they can be serious, but  this war is becoming daily more certain. Now is the time for the US  and UK public to stop a barbaric air blitz…

In fact, we may be so close to another mid-eastern war that Syrian President Bashir Al-Assad is emphatically trying to find an exit: END_OF_DOCUMENT_TOKEN_TO_BE_REPLACED