In Britain there are no human beings or citizens, no..
..there are only live money beings.

The population allows this to happen. They allow the state to tax them very hard and no real protest happens. They seem to like it, or they are just under the spell of a very organized propaganda. After all it is for the common good.

Let’s all in Britain scream in one united voice that we want a very expensive private educational system perpetuating social walls. Here is another idea: why not, instead of letting older generations freeze in the winter, the banker boy just shoots them all. It would be more dignified. He could even privatize this and get some tax out of it.

Britain is heading towards an intellectual black hole.

In Britain there is no social critique or artist that inflames the masses.

There is no one to sing “No future.”

Britain is a master case study to understand how ideology and propaganda work in a free market.

Now put this poster up

We have horse meat, high inflation, decaying economy, growing child poverty, school’s knife crime growing, The rich getting richer (Live money beings) and the poor left to live on the streets, bills going up, bad TV and so on. We are doomed. There is no future, it looks like the 80s all over again. I wish we had the Sex Pistols back to sing about our failing system.

I think Oliveira must read Empire and Multitude… Coz this article reflects the ideological abstraction of Negri and Hardt. However, this article was too short. I think it’s like an ideological wake up call nevertheless. 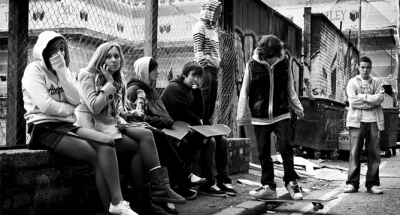 Okay this is satire. In Britain we have a special institutional arrangement for de-fusing all knds of protest and dissent.. school, prisons, mental institutions, class structures and family rules, etc.  Even the Sex Pistols screaming Anarchy in the UK was sold as one more commodity. Now even the safety valve of Squatting is being abolished. But when things finally do explode, like last years riots… WE REALLY GO FOR IT. The revolution in the UK, if it finally ever arrives, will be super advanced..