By Katherine Brooks        Two members of the Russian punk activist group Pussy Riot were detained in Russia on Monday after participating in a protest outside of a Siberian prison, The Associated Press reports.

Maria Alyokhina, one of three Pussy Riot members famously arrested after performing in a Moscow cathedral in 2012, tweeted that she and Olga Borisova were taken into custody by police after protesting the imprisonment of Ukrainian filmmaker Oleg Sentsov in Yakutsk, a remote city in Siberia located approximately 3,000 miles east of Moscow.

According to the AP, footage of police stopping Alyokhina and Borisova surfaced on MediaZona, a website centered on legal news that Pussy Riot members helped to set up.

Alyokhina has since tweeted that the two “are alive” and awaiting trial. She also shared video and images of the protest that show a banner reading “Free Sentsov” hanging on a bridge near Sentsov’s prison.

Sentsov, best known for his 2011 film “Gamer,” was originally arrested in Crimea, the Ukrainian region seized by Russia in 2014, and later charged with participating in a terrorist conspiracy. He was sentenced to 20 years in jail by a Russian court.

Sentsov’s family has described his experience with the Russian legal system as a “Stalin-era show trial,” while his lawyers have classified the charges against him as “absurd and fictitious.” According to The Guardian, at least 10 Ukrainian individuals were serving extended sentences in Russia as of 2016.

“For three years I’ve been sitting in a Russian prison. For those three years a war has been conducted against my country,” Sentsov wrote in a letter that was allegedly smuggled out of the Yakutsk penal colony. “The enemy is fighting like a coward, vilely, pretending he’s got nothing to do with this. Nobody believes it. But that doesn’t stop him.” 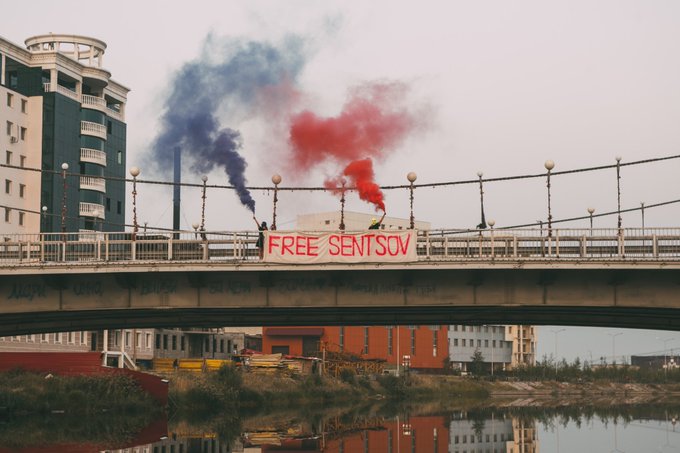 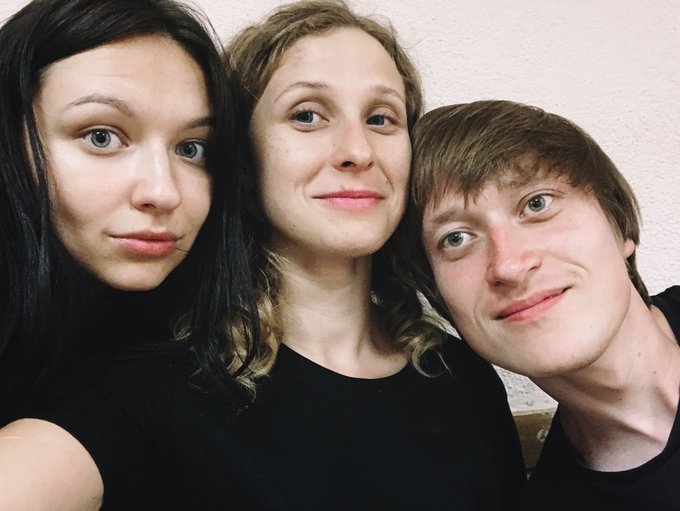 Alyokhina and fellow Pussy Riot member Nadezhda Tolokonnikova were convicted of “hooliganism motivated by religious hatred” after performing an anti-Putin “punk prayer” in Moscow’s Christ the Savior Cathedral in February of 2012. The two were freed before the end of their two-year prison sentences in 2013, ahead of the Olympics in Sochi.

Since leaving prison, Pussy Riot has advocated on behalf of various individuals they deem political prisoners. Tolokonnikova also recently announced an immersive theater project titled “Inside Pussy Riot,” which will open in London this fall.

FROM HUFFPOST, SHARED WITH THANKS