latest news: The Spanish State has taken direct control of the local ‘Mossos’ Catalan Police to help stop the Referendum on Independence. The police unions have not yet responded but rumour has it that many will ‘take the day off’.

This comes amid a rapidly escalating political crisis in Spain caused by the central government repression of the independence referendum called by Catalan separatist forces for October 1.

Just over a week before the scheduled referendum, Spain’s Interior Ministry has activated one of the largest security operations since the end of the fascist regime of General Francisco Franco in 1978. It is employing three tourist cruise ships to house more than 4,000 police sent to Catalonia. Two of the boats are anchored in Barcelona and the third in Tarragona.

In an “extraordinary assembly” on Thursday morning, dockworkers from the Organization of Port Workers of Barcelona (Organización de Estibadores Portuarios de Barcelona -OEPB) met to declare their response to the previous day’s arrests. 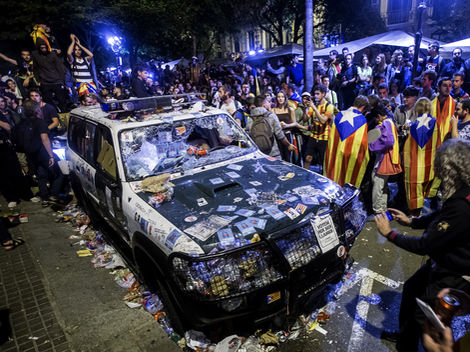 They unanimously agreed not to give any service to the two cruise ships, “in defence of civil rights”, and against what they defined as “repression ships.”

from  FreedomPress   The anarchist CNT union report that national police have been shipped in from all over Spain and are holed up at Barcelona’s port, seemingly in preparation to crush any significant upheavals. The anarchist workers commented..”we want to show our rejection of the repression inflicted, once again, by the Spanish State”……

OEPB secretary Josep Maria Beot said the company managing the port had ordered five workers to take care of several containers of one of the boats. He added, “As long as this exceptional situation lasts, we will not attend the ships that are selected to respond to this situation.”

A dockworker, Gabriel Jiménez, told the daily El País: “Many civil rights are being violated, and as dockworkers, we are affected.” He added, “If they were normal cruise ships or a refugee boat we would supply it without thinking, but to these ships, if they ask us, we will not give them anything.”

Hours later, workers from the company managing the loading and unloading of goods in the port of Tarragona also refused to service the ships. They announced they would not supply fuel to the ships because they can contribute “to the repression of elementary democratic principles.”

On Wednesday, Spain’s Civil Guard arrested 14 high-ranking public officials in the Catalan regional government, and local Catalan businessmen. The same morning, they tried to raid the headquarters of the … separatist Popular Unity Candidacy (CUP) party without a warrant. They stopped when protesters blocked the entrance.

This was the latest attempt of the conservative Popular Party (PP) government to halt the independence referendum. Days before, the Civil Guard seized voting cards, referendum posters, pamphlets and printing plates. They also closed 22 pro-referendum websites. Catalonia’s home rule has effectively been suspended after the central government took over the Catalan government’s financing system.

On Wednesday night, Rajoy once again said that the referendum will not go ahead, and told Catalan regional premier Carles Puigdemont: “Don’t go ahead. Go back to the law and democracy. This referendum is a chimera.”

The following day, Puigdemont reacted by posting a tweet announcing to the Catalan population the locations where they will be able to vote. 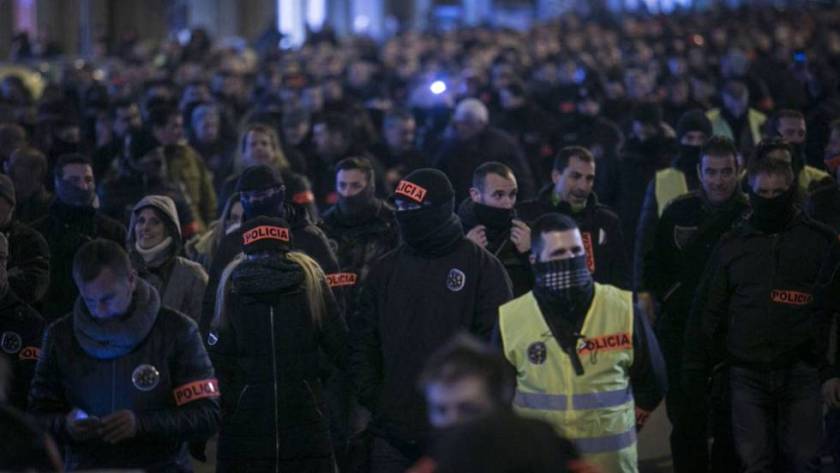 Reports suggest that the PP government, supported by the [Blairite] Socialist Party (PSOE) and [pro-Big Business] Citizens, will activate Article 155 of the Spanish Constitution to legally suspend home rule in Catalonia. The article has never been invoked for fear it will trigger an eruption of political opposition both inside and outside of Catalonia.

The Catalan nationalists have laid the basis for state repression of the region’s dockworkers. The separatist Catalan European Democratic Party (PDeCAT), to which Catalan premier Puigdemont belongs, voted last May alongside the Basque Nationalist Party in favour of the PP government’s decree stripping the dockworkers of basic rights and benefits.

The law, passed under pressure from the European Union, led to the privatisation of the ports and the decimation of working and safety conditions for 6,000 dockworkers.

Defending their support to the PP’s law, the PDeCAT spokesperson in the Spanish parliament, Ferran Bel, declared that he hoped the EU will “take note of our [the Catalan separatists’] commitment to Europe.”

Behind Bel’s phrase was the commitment that the Catalan bourgeoisie would not hesitate to comply with the EU’s crushing austerity, militarism, imperialist wars, and incitement of xenophobia. It showed that the independent Catalan republic they aim to build would carry out the same type of attacks on workers as it has already done as a regional government.

see also..Catalonia and Spain set for Head-On Collision over Right to a Referendum

While most of the Spanish media is backing Rajoy’s measures and calling for a further crackdown, Catalan dailies are warning of the social unrest this can create.

Enric Juliana in La Vanguardia warns that the “growth of the protest may blur some emotional boundaries between the supporters of independence and those against. This new movement can increase in the next days, depending on the decision of the state apparatus.”

Yesterday’s editorial of El Periódico de Catalunya warned, “Social indignation has gone beyond the perimeter of independence to extend to the trade unions, university rectors, students, professional schools and institutions as emblematic as Football Club Barcelona.

This almost unanimous clamour should lead the Interior Ministry to measure its future steps very well, unless the forcefulness on display seeks to precipitate street mobilisations. In any case, the air of insurrection of these protests, like a thermometer of the social temperature, deserves a deep political reflection on the part of the two governments.”

Spanish dockworkers’ leader Jordi Aragunde who is Coordinator of the Catalan-Balearic Area Port of Barcelona stevedores and one of the leaders of the International Dockworkers Council discusses the struggle of dockers in Spain and the attack on the working class in Europe and internationally. This includes the privatization of the ports of Greece … He also discusses other trade union federations and the difference that exists between them and the IDC.

He was interviewed at the headquarters of the Barcelona stevedores’ offices on June 6, 2014.

Catalonia: Right and Left pact for a Republic

When will we see Tanks in Barcelona streets?