We had just positioned ourselves downwind from the teargas canisters that had been fired towards us from the ranks of riot police protecting the Sous-Préfecture, the French state’s HQ in Alès, southern France.

Then suddenly we were coming under attack from the opposite direction. A squadron of cops was lurking, unseen, on the other side of the modern pedestrianised square and had started firing tear gas from behind us.

Choking and with streaming eyes, we fled down a little side street which, ironically enough, turned out to be dedicated to the “martyrs of the resistance”.

Passers-by, women with young children, stood gawping in the direction of the clouds of chemical warfare following us down the road.

“Incredible!” said somebody behind me, astonished at the violent reaction to the protest. “They’ve completely lost the plot!”

Suddenly there was an almighty noise and on the pavement next to us rolled a hefty rubber bullet, a “flashball”, which had bounced off a nearby wall and almost hit the little group of local onlookers.

We scattered, for the moment. Some headed out of the town centre, only to be met with a baton attack by a marauding gang of cops. Others regrouped and carried on the fight, with reports of injuries from yet more rubber bullets.

The police helicopter circled overhead, frightening the herons on the river Gardon, which flows through the town.

This was all a far cry from the last report I filed from Alès for Red Pepper in December, when the Gilets Jaunes were handing out free Christmas presents to local kids.

Today was Saturday March 2, Act 16 of the Yellow Vest uprising which has seen a broad cross-section of the French public take to the streets against President Emmanuel Macron’s neoliberal regime, with a ferocious determination that puts the rest of the Europe to shame.

Alès was the location for a regional protest, uniting Gilets Jaunes from across the Gard department and beyond. 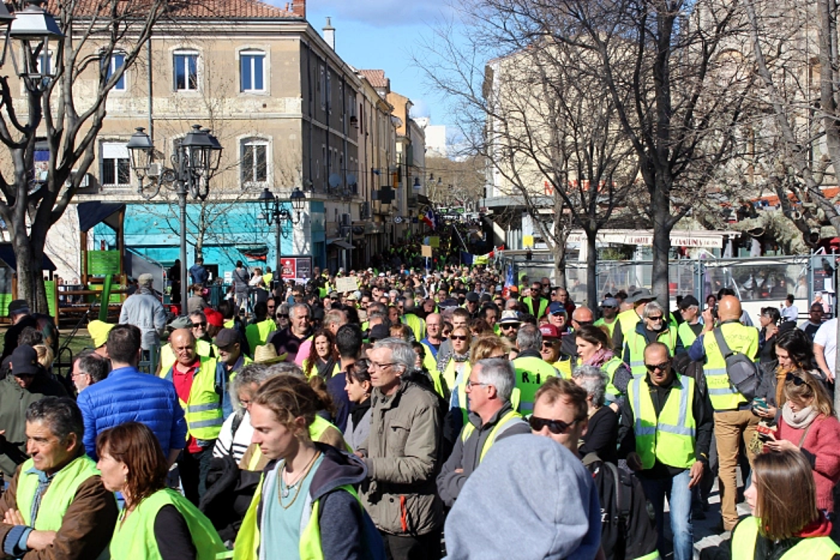 There was a carnival atmosphere as the protesters gathered outside the municipal theatre in Alès, with a Batacuda band creating a lively rhythm as we set off on a tour of the town centre.

The cops made a sudden and provocative appearance in the midst of the crowd before we moved and we were later told that three Gilets Jaunes had been arrested as they tried to join the protest.

Others were stopped by police on the approaches to the town, which might explain why the numbers on the march swelled remarkably in the first ten minutes or so until we had easily reached 3,000.

As ever, the protest was diverse and politically mixed, but there was a very strong showing from the local libertarian left, who had advertised the event on their networks. The loud refrains of “a-anti-anticapitalista” paid witness to their presence.

The festive feeling, with hardly a cop in sight, lasted until we reached a roundabout next to the Sous-Préfecture.

Here the police were lined up in full riot gear to stop us going anywhere near their masters’ property.

After a short stand-off, we headed off down the road to the rail station, which was also heavily guarded by the cops, presumably because of the Gilets Jaunes’ successful track record in blocking railway lines. 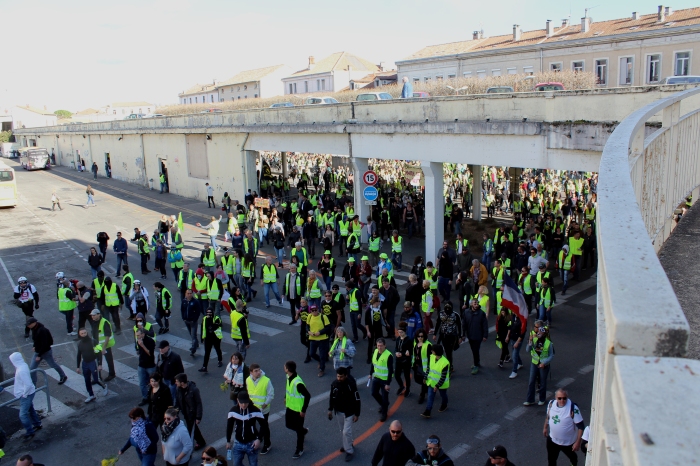 A back street led us back to the other side of the Sous-Préfecture and, inevitably, another line of police vans and robocops. It was not clear what sparked things off – someone told me the riot police had fired a rubber bullet at head level.

In any case, things quickly escalated. Outraged protesters shouted the familiar chants of “everyone hates the police!” and “police everywhere, justice nowhere!” and the tear gas was answered with a hail of stones and the odd firework.

Across France, it was the same story, not least in Montpellier, just 40 miles down the road from Alès.

Every week the authorities and their tame media tell the public the rebellion is petering out, there is hardly anyone out on the streets, the whole thing is a flop. And every week they deploy thousands and thousands of tooled-up thugs to attack the Yellow Vests with batons, tear gas and grenades.

After four months of revolt, those who hold power in France, and elsewhere, have ceded nothing. And those who oppose them are not ready to give up. How will this end? Where will this go next? None of us can say, because history is being written, in bold yellow lettering.

Yellow is the new bloc

The heartbeat of the yellow jacket revolt is rural

Christmas with the gilets jaunes

May our yellow sparks of revolt set the world ablaze in 2019!

France on the brink: either we topple the system or it will crush us