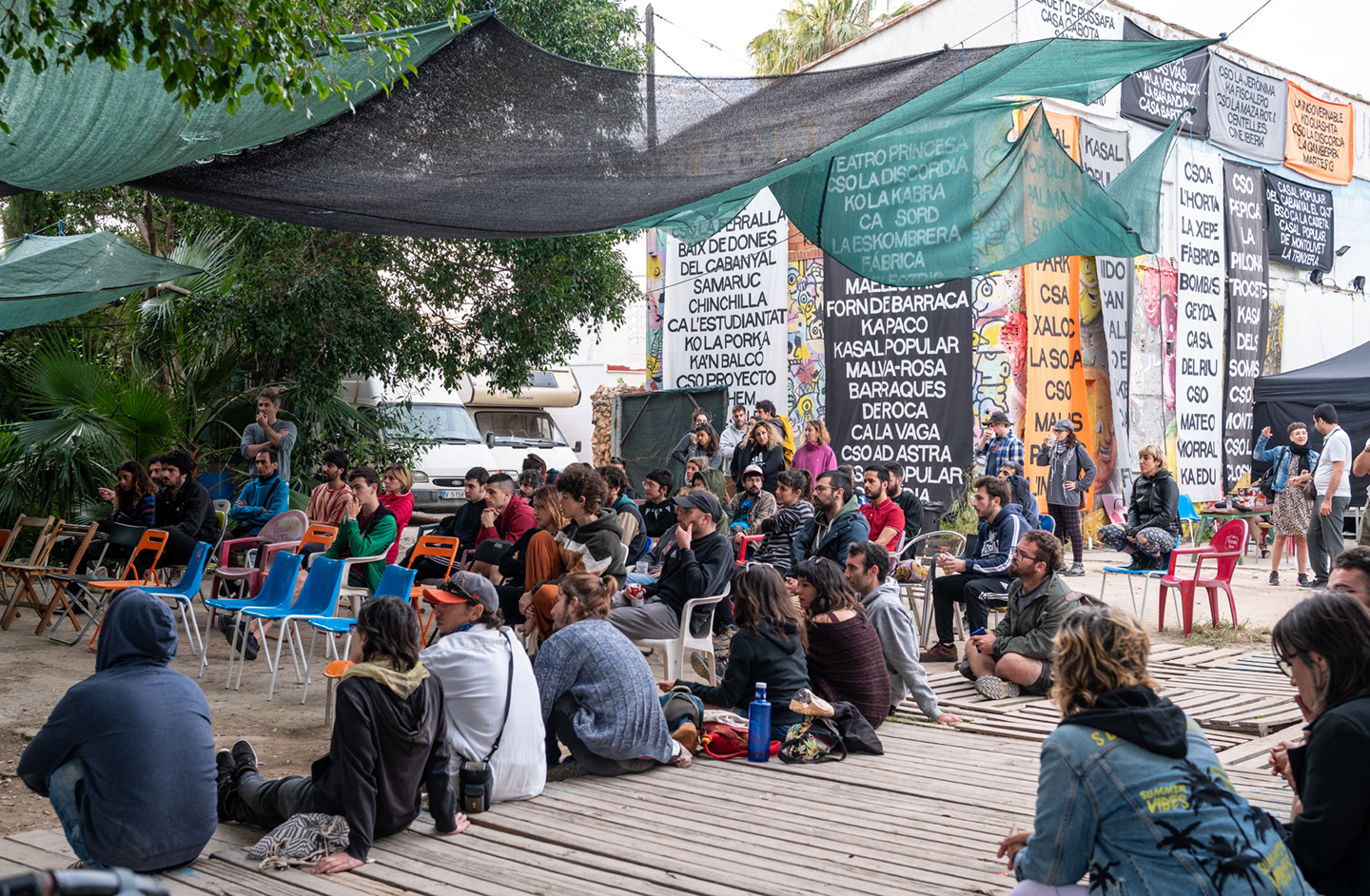 May 9, 2022 by Marc Campos on La_Directa translation thefreeonline

In the neighborhood of Benimaclet, in the north of the city of Valencia, caressing the edge of the orchard despite the presence of the Ronda Nord – the metropolitan road structure that surrounds this side of the city – grows every day a historic farmhouse of high ethnological and architectural value dating from the late eighteenth century.

At the end of Carrer Diógenes López Mecho, next to Plaça de les Tretze Roses – named after the Feminist Assembly of Benimaclet – we find, always with open arms and doors, the Center Social Okupat i Anarquista (CSOA). Horta.

The estate, known since its inception as the Tello Farmhouse, dedicated to the cultivation and sale of flowers (Flores Amanda, formed by a farmhouse, courtyards and nursery on the Camí del Farinós 16–, was included in 1989 –in of the General Plan of Urban Planning (PGOU) – in an urban program that, until 1999, would be developed through expropriation and, from then until now, through a process – legitimized under the “general interest” by the municipal administration – which grants the disposition and urban exploitation of the lands to a construction company, under the name of Integrated Action Program (PAI) of Benimaclet-Est.

The farmhouse, which has two buildings, took on the dual function of housing project and Occupied Anarchist Social Center (CSOA). In this first stage – from 2005 to 2007 – conflicts arose between a family that lived there and the youth of the CSOA, to which was added the harassment of police and thugs paid by the ex-owner – thus assuming the end of the project of ‘occupation, both social and housing.

At the end of March 2012, during the general strike, around thirty people again occupied the estate with a clearly political aim, giving birth to what is now known as the Anarchist Occupied Social Center (CSOA) l’Horta.

Thus began the process of restoring, recovering, and cleaning the space; the buildings were rehabilitated and the land re-plowed.

‘Mafalda’ performance during the musical night of the birthday | Jaume Ferrando

According to Irene, a member of the CSOA l’Horta Political Assembly, ”. But – as they recall – the permanent alert was not the only feeling that was lived in those first months, also the illusion, for a space so full of opportunities.

“We received support from other occupied spaces, such as the now defunct CSO El Nido and CSO Proyecto Mayhem,” says Irene. And he added: “We are certainly the heirs of other spaces, of other struggles.”

Since then, the CSOA l’Horta has forged numerous links with other political spaces and projects, especially in the neighborhood where it grows, Benimaclet, such as the Feminist Assembly, the Social Center Bar (CSB) Terra or the Cuidem Benimaclet neighborhood assembly. .

At the same time he has participated in city-wide projects such as Juntes sin por, Valencia is not for sale or EntreBarris, and always with an internationalist look – in colleagues from other parts of the world, as has been evident with the visit of International Brigades over the years, such as in 2021 with the visit of the Zapatistas of La Gira Per La Vida – members of the Zapatista Army of National Liberation (EZLN) and the National Indigenous Congress (CNI).

Thus, for 10 years, “it has become a physical space where to carry out the different struggles –such as the struggle for housing and for the territory–, to orient a social transformation, a new world, for self-management, the occupation and transfeminism ”.

“The CSOA l’Horta has not stopped expanding beyond the green fence of the old Alqueria Tello, and weaving a revolutionary social network strengthened with dynamics based on solidarity, mutual support and, ultimately, of anarchy, ” they say.

The best strategy is to “have us”

During the first months of activity, many self-managed orchards sprang up around the farmhouse, which currently form a total of 84 plots in an area of ​​8,000 square meters. This is how one of the first groups in the space exploded like a new flower: Hortets. (mini gardens)

Along with Hortets, and with the passage of spring, the groups and projects multiplied. Today we find, in addition to Hortets, the Assembly of Solidarity in Mexico, the Defined Management Group, the Liberated Musical Space, the Casita de la Huerta, Muai Tai, the Anarchist Library of l’Horta, the Horta Political Assembly, Legerin Azadi, Arada, GRAMA, Teatre Mariner, the Feminist Assembly of Benimaclet and the Valencia Employment Office.

“The CSOA l’Horta is everyone’s home, if there are anyone’s homes.” This is how Adrià, a member of the CSOA l’Horta, sums it up in several of its assemblies. Who doesn’t hesitate to point out that “the best strategy is to have us.”

As we are told by the legal team, L’Horta is in constant legal danger. “It is a time of post-offensive by the SAREB, through a fund manager and toxic assets for various companies: NOW ASSET MANAGEMENT SL”, explains one of the lawyers. (note: SAREB is a state funded bank set up to manage toxic assets of other banks after the 2008 crisis.)

“Currently and until now, SAREB SA has not been able to motivate the cause enough to be able to evict L’Horta,” they say.

In this regard, we must remember the attempted illegal eviction perpetrated on December 14, 2021, the stoppage of which they consider “a political victory.”

So far, they have won two proceedings against L’Horta, since, according to the legal team, “we know 300% of the legal, cadastral and registration evolution of the space, while the SAREB has not been able to verify the square meters that it claims to own ”.

The old farmhouse is surrounded by self-managed gardens | Jaume Ferrando

In addition, they point out that Horta is also threatened by Valencia City Council, which through administrative channels “could orchestrate an urban operation that, by force of law, could shake Horta’s political project.”

The Integrated Action Program (IAP) is now being developed as a SPECIAL PLAN “to – according to the legal team – legitimize a design of the old IAP without any modification in terms of buildability.”

From the Cuidem Benimaclet neighborhood assembly, from where they fight daily in defense of these agricultural lands, they assure that having the CSOA l’Horta in the neighborhood gives them a lot of strength.

In the words of Mireia, a member of Cuidem Benimaclet, “the CSOA is a lung that reminds us of the importance of the vegetable garden, which is part not only of our neighborhood but of the whole city of Valencia, and that this is a space where Collectively we can sow utopias, as we have already done with the experience of all the orchards occupied during the last ten years ”.

But all these self-managed and occupied orchards, irrigated with water from the Alegret arm – belonging to the Séquia Major de Mestalla which historically nourishes the lands of this point of the orchard are threatened by the plans of Elisa Valía – councilor of the Integral Water Cycle, Neighborhood Participation and Action, Transparency and Open Government, and President of the Metropolitan Entity of Hydraulic Services (EMSHI) – who considers that the arm of the Alegret must be cut for health reasons.

This decision would affect not only the vegetable gardens of the CSOA L’Horta, but all the self-managed orchards in the Benimaclet district, such as those of the Benimaclet Neighbors Association (AAV).

However, Mireia concludes: “We will continue to organize ourselves from the margins, the backbone of the popular movement as we have done for the last 10 years at the CSOA l’Horta, which has taught us all that politics is also part of life daily, which can be transformed from everyday life, whether it’s dancing folk dances and planting your own vegetable garden, as if training for collective self-defense ”.

10 years of occupation, transfeminism and anarchism

A festive weekend for 10 years of struggle. Between May 6 and 8, the space for political organization, but also for meeting, has hosted various activities, always outside the capitalist and patriarchal logics, where all identities have been welcomed, but not all attitudes.

On Friday, the “10 years of community in struggle, the best strategy, having us” conference began with an intergenerational ping-pong championship, a trivial squat and various performances, including a dance-hall by of the Riot Roses VLC, Waterparties PD and a musical surprise: the performance of the famous Valencian group Mafalda.

The next morning, the day was born with the intervention in the Jarderna Lluerna by Cuidem Benimaclet. A volleyball court was set up and several trees were planted, including an olive tree, a mulberry tree, a fig tree and a hawthorn tree.

Performances also took place, such as the Pepe Ruiz concert just before the community vegan paella or the concerts with El Indigente Cognitivo, Asko i Susto and DJ Ortera Lara.

In the afternoon we were able to attend the talk “Is it possible to fight fascism on social media?”, With Cuellilargo Collective and Proyecto UNA, and the presentation of the ILP Regularization Ja! ‘this question.

The work Ungovernables, by the company AtiroHecho was one of the most vibrant moments of the night | Jaume Ferrando

Presentations continued on Sunday: Human Rights Brigades in Chiapas, by ASMEX, Autonomia P’urepecha and defense of the territory in Mexico, with Lilia Prado and Forest Firefighters in Fraud of Law with the presence of unions such as the central anarcho-syndicalist General Confederation of Labor (CGT), Intersyndical and the General Union of Workers (UGT).

Also noteworthy is the open day of the La Casita de la Huerta project – a free learning space for girls – and the folk dance workshop taught by Les Postisses, as well as the raffle for a bicycle donated by the Cyclo-Oficina Engranuja del Baix Social Okupat (BSO) Ca la Caixeta and a box of vegetables from the transfeminist and libertarian agroecology project Les Mikorrizes.

Political excitement erupted, and Ungovernables from the political theater company AtiroHecho, along with Anaïs Florín’s exhibition Els Crits by the show and spectators, did the rest.