A team of 14 scientists at Boston University’s National Emerging Infectious Diseases Laboratories (NEIDL) developed a new strain of COVID-19 that killed 80% of the mice infected with the virus in a laboratory setting, according to a preprint study published Oct. 14.

By  Michael Nevradakis, Ph.D. at Childrens Health Defense via thefreeonline

Following the announcement, numerous news stories about the study’s results focused on the fatality rate observed in the laboratory mice used in the study. But reports said they also tested on human cells.

“[The researchers] found the hybrid strain produced five times more viral particles than the original Omicron.”..According to the MetroUK, “The scientists also infected human cells with the hybrid variant and found it was five times more infectious than Omicron.”

However, behind the headlines, some scientists and others raised concerns about the nature of the research and the fact that it was partially funded by the National Institute of Allergy and Infectious Diseases (NIAID), headed by Dr. Anthony Fauci.

The research was conducted using what some scientists called “gain-of-function” research, raising concerns that this type of research — which some theorize led to the creation and escape of the original Wuhan strain of COVID-19 — is still being done, despite concerns that it could lead to more lab escapes and more pandemics.

Gain of function refers to the “manipulation of pathogens to make them more dangerous,” in the hope of “getting ahead of a future outbreak.”

only 20% of the animals survived

Commenting on the researchers’ announcement, Robert F. Kennedy, Jr., Children’s Health Defense chairman of the board and chief legal counsel, remarked on the potential danger of such research — and its federal funding:

“What could be more insane than Anthony Fauci funding more of his gain of function experiments to soup up coronavirus lethality in the middle of a pandemic caused by a juiced-up coronavirus that has killed millions?

“All of horrified humanity is watching Lord of the Flies play out at National Institutes of Health and praying for the adults to appear.”

Rachel Lapal Cavallario, Boston University’s associate vice president for public relations and social media, told the media the research conducted was not gain-of-function research and that, “In fact, this research made the virus [replication] less dangerous.”

However, others disputed that claim.

“Viruses have managed to escape even the most secure labs,” Marshall said, adding that this type of “research must stop immediately while the risks and benefits can be investigated.”

“It is akin to madness because … they basically created and published a recipe for a deadly pathogen (80% mortality rate in the subjects of their experiments) of their own construction in their lab.

“By the way, this is precisely gain-of-function research. It couldn’t be more descriptive.”

Boston University today issued the following statement, downplaying the risks of the research:

“The research was reviewed and approved by the Institutional Biosafety Committee (IBC), which consists of scientists as well as local community members. The Boston Public Health Commission also approved the research.

“Furthermore, this research mirrors and reinforces the findings of other, similar research performed by other organizations, including the FDA. Ultimately, this research will provide a public benefit by leading to better, targeted therapeutic interventions to help fight against future pandemics.”

NEIDL describes itself as “a Boston University Center dedicated to research on emerging and re-emerging infectious diseases and the pathogens that cause them,” and “a major step forward in advancing public health” that “provide[s] the necessary information and understanding to develop diagnostic tests, treatments, and vaccines.”

NEIDL also claims that it “will not conduct any secret or classified research” and that “the public will have access through several channels to information about any and all research before it even begins” — making NIAID’s claims that it was unaware of the spike protein research project all the more perplexing.

According to the Daily Mail, NEIDL is one of 13 biosafety level 4 (BSL-4) labs in the U.S.

However, this particular research took place under BSL-3 precautions, although according to STAT, “There is no evidence the work … was conducted improperly or unsafely,” noting that an internal biosafety review committee and the Boston Public Health Commission approved the work.

The journal Nature described the difference between BSL-3 and BSL-4 as follows:

“BSL-3 laboratories are designed so that scientists can safely work with potentially lethal and inhalable pathogens in a contained environment. Experiments are conducted in sealed workspaces in which the air is filtered and not recirculated, and the entrance to the facility is typically secured by self-closing doors.

“BSL-4 facilities, in which researchers work with fatal pathogens that can spread through aerosols, and for which vaccines or treatments are lacking or limited, require extra security measures.”

University of Illinois international law professor Francis Boyle, J.D., Ph.D., said the dangers of BSL-4 facilities have long been known, which is why he participated in efforts to stop the construction of the NEIDL facility.

Boyle, a bioweapons expert who drafted the Biological Weapons Anti-Terrorism Act of 1989, told The Defender:

“Years ago, there was a lawsuit to prevent and stop the building of this BSL-4 [facility] at Boston University that I did work on, and we failed.

“At that time we argued that the BSL-4 would engage in existentially type dangerous biological warfare research, and that was even before … gain-of-function.

So, we knew from the get-go how dangerous this lab was going to be and tried to stop it. We tried, we failed, and now this Nazi biowarfare death science dirty work is going on.”

However, the Boston University facility was completed with $128 million in NIH funding.

“You’ll note it was funded by NIH and NIAID under Tony Fauci.

“The New York Times has pointed out that about 94% of all this Nazi biowarfare death science dirty work has been funded by NIH and NIAID since Reagan put him in charge of NIAID.”

According to Boyle, this has resulted in more than $100 billion in federal bioweapons spending since Sept. 11, 2001.

Such research, and the facilities in which it is performed, also pose a risk to surrounding communities and the world at large, Boyle said, suggesting a Wuhan-like leak could occur at any similar facility in the U.S.:

“This is another catastrophe waiting to happen, and that Boston University BSL-4 [facility] should be shut down immediately.

“They know full well how existentially dangerous this is, certainly for the metropolitan Boston area … and especially for the African American community in Dorchester surrounding that Boston University BSL-4 lab.”

For Boyle, “It’s not enough to ban gain-of-function.” He also called for BSL-3 and BSL-4 facilities, including the Boston University facility, a CDC facility in Atlanta and a new facility in Kansas where the federal Plum Island Animal Disease Center is being relocated, to be shut down.

“The only remedy here is to shut down all BSL-3s and BSL4-s in the U.S.A., immediately and effectively,” Boyle said. “Otherwise, there is going to be another leak.”

Notably, the Wuhan Institute of Virology where research involving “engineered novel bat coronaviruses” took place is said to have been performed in BSL-2 and BSL-3 facilities.

“What they have done in this work, as described by their own methods and results, is akin to madness.

Rose questioned the lower safety conditions under which the NEIDL researchers created the hybrid strain, while also raising broader security concerns and calling for gain-of-function work to be “banned” and its products “destroyed immediately.”

“This paper reveals more than the successful creation of a deadly new virus. It [gives] this recipe in the methods to anyone with a decent lab to recreate it.

“They don’t even mention what the hell they are planning to do with this new virus! They don’t say a bloody word about the fact that they created a virus that for all intents and purposes, is a Level IV pathogen, so why the hell are they playing with it in a Level III [laboratory]?”

NIH claims it didn’t know what it was funding

According to NEIDL, grants from the NIH “provide the support for research at NEIDL.”

Following the publication of the preprint study — and the controversy that ensued — the NIAID appeared to distance itself from the research. According to STAT, “The research team did not clear the work” with the NIAID, leading the agency to look “for some answers as to why it first learned of the work through media reports.”

Dr. Emily Erbelding, M.P.H., director of the NIAID’s Division of Microbiology and Infectious Diseases, told STAT that the research team’s “original grant applications did not specify that the scientists wanted to do this precise work. Nor did the group make clear that it was doing experiments that might involve enhancing a pathogen of pandemic potential in the progress reports it provided to NIAID.”

Erbelding said the NIAID is “going to have conversations” with the research team in the coming days, adding that “we wish that they would have” informed NIAID of the “intent of the research.”

According to Erbelding, this would have likely resulted in a committee being convened “that would assess the risks and benefits” of the research involving “enhanced pathogens of pandemic potential.”

What the NEIDL researchers did

According to STAT, the NEIDL researchers set out “to determine if the mutations in the Omicron spike protein were responsible for this variant’s increased ability to evade the immunity to SARS-2 that humans have built up, and whether the changes led to Omicron’s lower rate of severity.”

The research involved extracting the Omicron variant’s spike protein and attaching it to the original strain.

Put differently, the scientists took the deadliest COVID-19 strain and combined it with the spike protein from the most infectious strain. They then infected laboratory mice and human cells with the new hybrid strain.

According to the Daily Mail:

“The researchers looked at how mice fared against the new hybrid strain compared to the original Omicron variant.

“When a similar group of rodents were exposed to the standard Omicron strain, however, they all survived and only experienced ‘mild’ symptoms. …

According to the MetroUK, “The scientists also infected human cells with the hybrid variant and found it was five times more infectious than Omicron.”

In the preprint, the researchers wrote:

“We generated chimeric recombinant SARS-CoV-2 encoding the S gene of Omicron in the backbone of an ancestral SARS-CoV-2 isolate and compared this virus with the naturally circulating Omicron variant.

“In K18-hACE2 mice, while Omicron causes mild, non-fatal infection, the Omicron S-carrying virus inflicts severe disease with a mortality rate of 80%. This indicates that while the vaccine escape of Omicron is defined by mutations in S, major determinants of viral pathogenicity reside outside of S.” 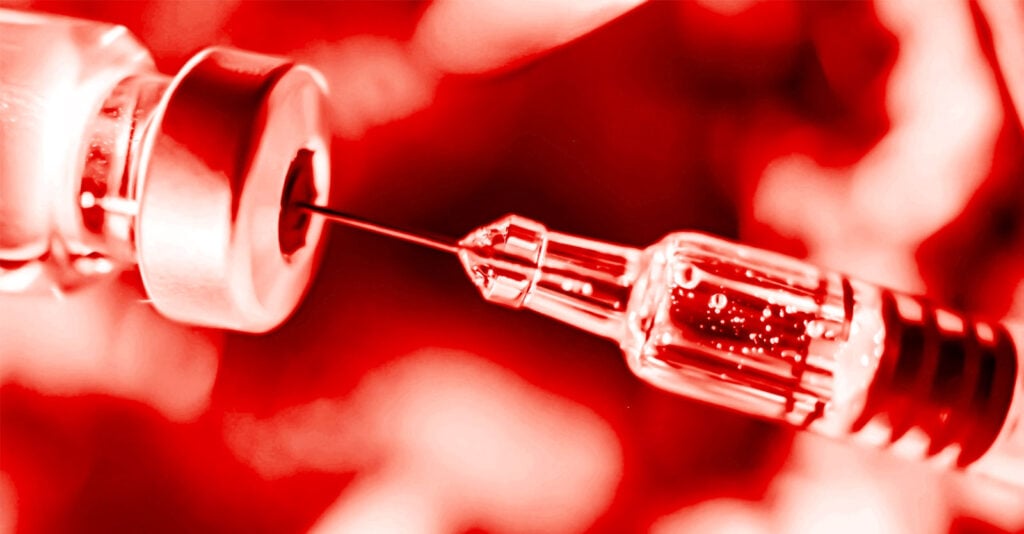 One thought on “Insane! US Team Create ‘Super-Lethal Strain’ of COVID-19 with 80% animal Death Rate”