A British scientist with 32 years of experience in the pharmaceutical industry warned right at the start of the Covid vaccine rollout that under no circumstances should the gene-based, mRNA jab be given to women of child-bearing age without studies to confirm it was safe.

Dr Mike Yeadon, former vice president for research at Pfizer, one of the manufacturers of the experimental mRNA products, filed a petition with the European Medicines Agency on December, 1, 2020, urging that even testing the jab on human volunteers was unethical without significant safety concerns being taken into account.

One of these was a similarity between virus proteins targeted by the proposed vaccinations and a protein (syncitin) essential for forming the placenta in pregnancy. If antibodies produced by the jab also acted against those proteins, the petition said, ‘it would result in vaccinated women essentially becoming infertile’.

Co-signed by Dr Wolfgang Wodarg, a leading German physician, the document also warned that the vaccine trials were much too short to flag up late adverse effects. It added that the design was such that the trials could not show whether the product worked either in stopping a person from becoming infected, or from infecting others.

Subsequently, Yeadon became one of the first scientists to highlight evidence from a previously confidential Pfizer study showing that the vaccine products do not stay at the injection site but become widely distributed throughout the body, including the ovaries.

In view of the toxic nature of the ‘spike’ protein that the jab manufactures (summarised here), Yeadon warned in August, 2021:

‘My assumption at the moment is that these vaccines are concentrating in the ovaries of every female who has been given them. We don’t know what that will do, but it cannot be benign and it could be seriously harmful.’

Revealed, how the ‘safe’ Covid jab triggers a toxin blitz on the body

It is now widely acknowledged that the jab neither protects against infection nor transmission, as Yeadon and Wodarg spelled out in their petition. If their knowledge had been sought at the outset of the Covid crisis the UK alone could have been spared the £500billion lockdown bill, with enormous associated social damage.

But what about the fertility warnings? Despite his years of experience at the top of his field, Yeadon has been vilified for speaking out. Is he really no more than ‘a hero of Covid conspiracy theorists’, as the Times described him?

Birth rates have fallen significantly in many countries, including the UK, in the wake of the vaccine rollouts. Various reasons for the fall have been suggested – usually excluding the jab.

Yet Dr James Thorp, a 68-year-old American physician who has practised obstetrics for more than 42 years and sees thousands of high-risk pregnant patients each year, has observed many complications attributable to the jabs, including foetal death and miscarriage. ‘What I’ve seen in the last two years is unprecedented,’ he says.

With help from several colleagues, he compared rates of adverse events following the Covid jabs with those reported post-flu vaccination in women of reproductive age. The focus was on events related to pregnancy and menstruation, using data from the US Vaccine Adverse Event Reporting System (VAERS).

A preprint of their findings published on September 28 shows a thousand-fold increase in menstrual abnormalities after the Covid jab, and significant increases in miscarriage, foetal malformation, growth abnormalities, cardiac disorders, foetal death and stillbirth.

Thorp has also highlighted risks to newborn babies taking milk from their vaccinated mothers. One study found mRNA from the jab in five out of 11 lactating women who had received the vaccination within six months of their delivery. 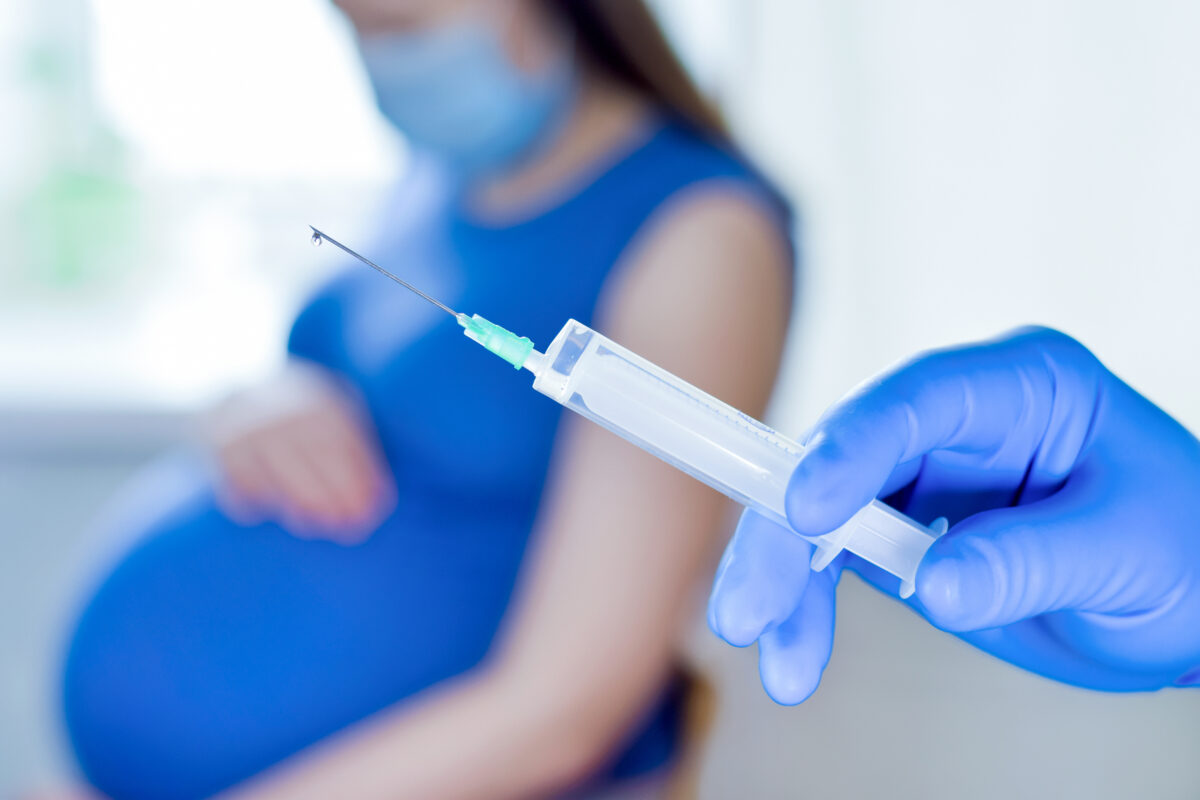 Last month, in a wide-ranging review in the US-based Epoch Times of these and other findings, US microbiologist and biomedical scientist Dr Sean Lin revealed that Thorp ‘has seen at least three newborns, completely healthy at the time of their birth, who passed away after being breastfed by their recently vaccinated mothers’. This suggested the vaccine components can not only accumulate in the ovaries but can also be passed on to infants via breastfeeding, he wrote.

He added that details of animal experiments performed before the jabs were authorised, recently obtained under freedom of information legislation, showed that mRNA and spike protein can travel through all barriers in a mother rat to enter its foetus. The rats themselves experienced toxicity during gestation, with some becoming infertile and losing the use of their hind legs.

Calling for an end to all Covid shots for pregnant women until long-term safety data become available, Lin writes: ‘The medical field and health agencies should still adhere to the fundamental ethical principle of ‘Do No Harms’.’

A hospital memo leaked to the Epoch Times by a nurse in Fresno, California, revealed how the hospital is experiencing a dramatic rise in the number of stillbirth cases, now upwards of 22 a month compared with an average of one to two every three months previously.

This massive increase seems to align with similar evidence from across the country showing a potential rise in problems with fertility, miscarriages and foetal development, the newspaper reported.

Could the vaccine have contributed to a ‘very unusual’ spike in deaths among newborn babies now being investigated in Scotland?

In the UK, one and a half million Yellow Card reports of suspected adverse reactions to the vaccines include 821 miscarriages and 58,171 reproductive/breast disorders.

With tens of millions of doses administered, those numbers have still not persuaded regulators that there is a problem, although real-world adverse effects can be at least ten times higher than those reported. ‘Our advice remains that the Covid-19 vaccines are safe and effective during pregnancy and breastfeeding,’ the Medicines and Health products Regulatory Agency (MHRA) reaffirmed in September.

A review last month in the journal Vaccine declared that based on studies published so far ‘there is no scientific proof’ of any association between the jabs and impaired fertility in either men or women.

It depends on what is meant by ‘scientific proof’. If scientists do not ask the right questions, they can avoid receiving unwelcome answers. Those who drove the vaccine rollout are choosing not to see the thousands of reported disorders as related to the jabs, despite the record numbers, and clearly demonstrated mechanisms of harm.

It took a mathematician/businessman, for example, to point out evidence of a dose-response relationship between the jabs and infant deaths, with significantly more deaths reported when the higher-dose Moderna jab is used during pregnancy than with the Pfizer product.

Igor Chudov, who highlighted this phenomenon using US Centers for Disease Control (CDC) figures, says the Moderna product is associated with nearly twice as many neonatal deaths as the Pfizer vaccine, and 42 per cent more miscarriages.

In the light of these data, he asks: ‘How can Covid vaccine given during pregnancy be safe, and NOT affect infant deaths?  How come nobody at the CDC asked this question? How come our media is silent on this?’

It is as though there are parallel universes: one occupied by those who can see no harm, and the other by doctors and scientists who insist a grave situation is staring us in the face.

The latter include three American medical whistle-blowers who found a 2021 rise of nearly 300 per cent in miscarriages among women serving in the US Army compared with the previous five years. There was no increase in 2020, when Covid arrived.

Doctors calling for a halt to Covid vaccination for pregnant women often meet abuse and censorship.

In October 2021, obstetrician and gynaecologist Dr Christiane Northrup told the Epoch Times: ‘Women are having bleedings. The doctors in our area are doing hysterectomies in young women, like 30-somethings.

They said “Oh, it’s not unusual”. Let me tell you, as a board-certified gynaecologist, that’s very unusual. Women’s periods are messed up all over the place . . . I’ve had a huge Facebook group of thousands of women talking about this situation that was removed.’

What of Yeadon’s worry that an immune reaction to the spike protein might block pregnancy?

A small study from Singapore, in 15 women, reported that none had developed anti-syncitin antibodies after the jab, but Yeadon says the actual data showed a clear increase, arbitrarily ruled as insignificant by the researchers.

‘It looked like someone had tried to dismiss our concerns by testing for evidence of the particular problem we’d warned about. Unfortunately, all they did is to reinforce our concerns.

‘We’d envisioned the risk that, in responding to the synthetic piece of virus spike protein, women’s immune systems would also make an immune response to their own placental protein. That’s exactly what was reported in the pre-print paper.

‘Based on this concern alone, all these experimental products as a class should have been completely contraindicated in women younger than menopause.’

He insists that a series of toxicology issues meant ‘adverse impacts on conception and ability to sustain a pregnancy were foreseeable from the start . . . There was and still is no data package supporting safety in pregnancy, or prior to conception.’

Not quite convinced about the vaccine? Neither is this guyMarch 27, 2021

SCAM AND SWITCH FRAUD: Pfizer and FDA gave Full Approval to COMINARTY version of vaccine which is still ‘NOT Available’

Scientist Whose Wife Was Injured By COVID Vaccine Tells FDA: ‘Please Do Not Give This To Kids’. They ignored him