An estimated 1,312 undercover anarchists were discovered within the Met’s ranks so far, with some still active. AFed, SolFed, Freedom Collective and The Wombles refused to disclose the names of infiltrators, instead providing the Inquiry with their numbers: ranging from ACAB0001 to ACAB1312.

They have also refused to say how many are still active, or what is the purpose of the undercover operation.

One member of Freedom Collective, who prefers to remain anonymous, said: ”We will be issuing a statement at some point, but first we need to have a number of very long meetings and argue on Libcom.

I guess we better start doing more illegal raves in order to gather funds we will likely need if the Met choses to take legal action against us. Also, for the record, there is no leader of this operation: it was purely self-organized”. END_OF_DOCUMENT_TOKEN_TO_BE_REPLACED

A DISTURBING REPORT issued by the International Centre For Research (ICFR) has estimated that guns are on course to phase out Americans by 2050, WWN has learned.

With the number of people suffering horrific and violent gun deaths in America exceeding 33,000 per year, it is believed when this harrowing statistic is combined with an unwavering commitment from politicians to do nothing, the result will be the total eradication of all 320 million Americans by 2050.

“If current trends continue, the last two standing will go down in a blaze of depressing glory sometime late 2050,” explained head of the report Duncan Morrow.

The ICFR report makes for truly upsetting reading, and begs for immediate action to be taken in relation to a number of competing problems which can all be identified as contributing to America’s gun deaths problem. However, leading Republican politicians who have received the report could only confirm how quickly it burned when placed on an open fire.

“I’m here to reassure you, you may be scared after what happened recently, but America will always be a place that is safe for you,” President Donald Trump said in a press conference in which he talked directly to an assortment of worried firearms, in a bid to reassure all guns that no harm would come them in these troubling times.

Others suffering insurmountable grief and pain after learning of yet more carnage facilitated by politicians paid by the NRA not to change laws have been told to reconvene in the usual places in public and online to voice their anger next time something like this happens again.

A variety of magazines, mostly out of the US that were published in December 2017. All in PDF here and some real interesting…

By:   thecollective       The following zines were published over the past month or so within the broad anarchist space. As always, we encourage folks to read, discuss, and engage with the ideas within. Organizing study groups, talk about them with your friends, leave copies in random places, or write scathing critiques of the ideas contained within and circulate them widely. Anarchist ideas are sharper when accompanied by a robust dialog and debate.

If you have suggestions for titles to include next month, let us know.

Below & Beyond Trump: Power and Counter-Power in 2017

This is a “strategy and analysis document” published by the Black Rose Anarchist Federation. It provides an analysis of the political context for social anarchists in 2017 and the prospects for “pro-organizational revolutionary anarchists” to intervene in the current period. The documents focuses on (briefly) understanding ruling class power, social movements, and offers suggestions for a path forward. In response to their understanding of the contemporary period, they call for building social movements from below, offensive campaigns, and developing explicitly socialist practices and programs. It reads a lot like a political party platform with a lot of vague statements, sloganeering, and solutions.

This is the fourth issue of a counter-information project based in Bloomington, Indiana called Plain Words. This issue features a few reports on actions in Bloomington (anti-logging and grand jury solidarity) alongside a number of longer essays. The stand-outs include “Mirror, Kaleidoscope, Dagger: What is Anarchism?” and an essay remembering the life of Haymarket martyr Louis Lingg. END_OF_DOCUMENT_TOKEN_TO_BE_REPLACED

Your children will grow up in a wordless journalistic landscape because why listen to expertise when we can just allude to someone having a fine 🍑🍑🍑🍑🍑🍑🍑🍑🍑🍑🍑🍑. 👉🏻👌🏻🥒💦💦💦💦💦

BELEAGUERED budget airline RyanAir have made thousands of apologies available to customers following the company’s mishandling of flight cancellations, for the low, low price of just €4.99 each.

The airline was forced to cancel up to fifty flights a day between now and October, following a holiday allowance backlog that left them with a critical shortage of pilots, cabin staff, and trumpet players.

Grovelling apologies to the 400,000 affected passengers who had their holiday plans cancelled with short notice have now been added to the Ryanair website, and boss Michael O’Leary has kindly allowed people to pay with cash, cheque or credit card.

“There is a processing fee for apologies purchased using credit card or cheque,” said a spokesperson for Ryanair, ignoring a chorus of ringing phones at their customer service department.

“And of course, if you want your apology sent out to you, then there’s a slight fee for that too. But apart from that, every customer that was left in uncertainty about whether or not their holiday was going ahead will be fully satisfied with their apology. Just take a number in our queuing system and have your payment method ready, and we should get to you within the day, if not the week”.

Ryanair went on to announce that all affected passengers would be entitled to compensation, which would be available in the form of scratch cards.

Like Loading...
THE United States have issued a stark warning to North Korea about the level of retaliation they will face if they attempt to attack US citizens or bases with any form of gargantuan mutated monster, following intel from Pyongyang that the DPRK has come into possession of a Godzilla.
“We have received a dossier that North Korea may be about to unleash a Godzilla, or possibly a Rodan on US naval warships in the Pacific Ocean,” stated President Donald Trump, clearing his schedule from any investigations into irregularities with his administration so that he could properly address the developing Kaiju crisis.

“The American people will not stand idly by and allow a dictator such as Kim Jon-un to threaten our way of life with a massive, city-stomping, fire breathing lizard creature, okay? Everybody, we need to concentrate all our attention on this. The entire west coast is at risk… have you seen the size of these things? Huge. Trust me”.The statement was met with scepticism from many opponents of the trump administration, who stated that Godzilla was a creature who was more connected to Japan, not North Korea, and that the North Korean administration had neither the capacity nor the resources to create a Kaiju of their own, even a shit one like Baragon or Megaguirus.

Nevertheless, Trump pledged to divert huge amounts of funding into the US Space X and Mechagodzilla program, promising to meet any North Korean Kaiju attack with ‘massive firepower’ the likes of which the world hasn’t seen since Destroy All Monsters.

Like Loading...
THE tyrannical leader’s threat could cause the deaths of millions if he carries out his planned attack on the US healthcare system.Both Republicans and Democrats in America have been locked in emergency meetings since late last night on foot of receiving a threat from despot and North Korea leader Kim Jong Un.
.
While news of yet another missile test led to robust language issued by the US government warning of consequences if missile tests continued, the White House has officially declared a state of emergency across the nation after Jong Un threatened to rescind medical coverage for 22 million Americans, many of whom have preexisting conditions.

“This barbarity is something only a Republican should be able to carry out, Kim Jong Un is threatening our very beliefs as Americans and we must stop him,” confirmed House Speaker Paul Ryan earlier this morning.
. END_OF_DOCUMENT_TOKEN_TO_BE_REPLACED

Like Loading...
WITH death by nuclear fire back at the top of everyone’s ‘shit I’m afraid of right now’ lists, many people have started thinking about preparing for survival in a scorched, post-apocalyptic wasteland.
If you’re unsure as to what you should ‘pack’ for your journey into the unknown, then allow WWN to walk you through 5 things every Irish person should have in their bunker…
1) Drink
Life in a nuclear fallout shelter is zero craic, unless you get yourself well oiled. Remember; space is limited, so don’t stow cans. Spirits are a far more concentrated, effective way to get yourself shit-faced and ignore the scrabblings of the damned as they try to claw their way in.
2) Iodine pills
The government sent them to you, you threw them in the drawer with the old birthday cards and the Nokia chargers.. now’s the time to put them iodine-ey bad boys to use! Put them in your bunker so you can neck them swiftly when the time comes. END_OF_DOCUMENT_TOKEN_TO_BE_REPLACED 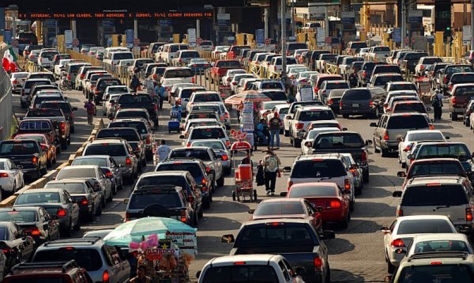 Tens of thousands of illegal US refugees are fleeing across the Mexican borders.

MEXICAN President Enrique Peña Nieto has confirmed today that a proposed plan to build a wall between the United States will now go ahead, in a bid to stem the flow of ‘American refugees’ currently attempting to migrate from the Trump-led nation.

Pena Nieto, who previously dismissed President Trump’s proposal to build a 35 to 40 foot concrete wall at the cost of $8bn to the Mexican taxpayer, made the dramatic U-turn yesterday afternoon, following reports of a large scale immigration of people wishing to leave the ‘land of the free’.

So far over 500,000 people are already queueing at various border controls along the current Mexican/US border, forcing the Mexican president to temporarily restrict access to non-Mexicans wishing to escape Donald Trump’s America.

“We’ve been queuing here since Friday,” one father of four told WWN, “we’ve been made stay in a refugee camp along with other Americans. All I want to do is find a better quality of life for my family. Now we’re stuck here in limbo”.

President Enrique Peña Nieto said he will continue the ban on all immigrants until the wall is built, and urged Americans not to waste their time attempting to cross the border without the appropriate documentation.

“Our borders are currently overwhelmed with overweight men, women and children from the United States of America,” he said, “we have no other choice but to close our borders and build this wall to help secure our country”.

Emergency pop-up McDonald’s restaurants have been erected along the border controls to help feed the starving refugees. The Mexican Navy reported it has saved several hundred people from drowning after trying to cross on makeshift rafts.

In a harrowing incident, one desperate family attempted to cross on their 400lb father, who later had to be sunk after the rescue as emergency crews failed to hoist him to the helicopter.

Dublin, Ireland
And the United States will be made to pay for the wall!
Like · Reply · 9 · 15 hrs

I wonder how many are wearing giant foam vaginas?!