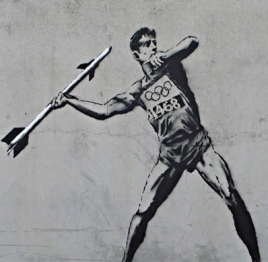 There has been a recent crackdown on graffiti artists prior to the 2012 Olympics in London.Here are 2 new pieces by “Team Banksy“, featuring his personal take on the games.

“This attack on one of contemporary London’s most renowned traditions reveals how deeply uncomfortable the cultural relationship between this city and the Olympics really is,” writes Jonathan Jones in The Guardian. “An event that is all about massive finance, colossal scale, hyper-organisation and culture delivered from above is being superimposed on a capital that happens to be best at improvisation, dirty realism, punk aesthetics and low art. It’s like Versailles versus the sans-culottes. And this time Versailles is determined to win.”

This relates to Banksy’s series on the Israel/Palestine wall, which enforces the Gaza mega open prison

4 thoughts on “Olympic graffiti..Banksy vs. Coca Cola and McDonalds”