A message from Adbusters: Look at what’s happening in Quebec … the boldness of the media democracy movement

in Mexico … the teenagers leading an education revolt in Chile … the Pussy Riot inspired art war unnerving Putin in Russia … and the new post-capitalist ways of living being forged in Greeceand Spain.

Witness the growing tempo of green riots across China, the South African minerstrikes, the corruption protests of India, the freedom fight in Bahrain, the tremors of dissent in Saudi Arabia, the total loss of confidence in America’s corporate-funded Coke-Pepsielection show.

Then, add to that the crippling droughts, looming food scarcity, the end of easy oil and the tipping points hovering ominously on the horizon …

Occupy began as a primal scream against the monied corruption of our democracy … but after a year of struggling against an unrepentant corporatocracy, our goals are now deeper, our dreams wilder. We see a common thread emerging — a blue-green-black hybrid politics — that unites and elevates our movement:

On the blue front, we eradicate the commercial virus infecting our culture – we liberate the flow of information, champion the leakers, protect anonymity, and break up the corporate media monopolies with outrageous creative hacks.

On the deep green front, we push towards a decisive victory in the forty-year environmentalist struggle – we institute a binding international accord on climate change, pursue a worldwide de-growth economic agenda funded by a Robin Hood Tax and establish an across the board true cost market regime in which the price of every product tells the ecological truth.

On the black front, we restore the dominion of people over corporations by all nonviolent means necessary – we unleash a visceral wave of jams, meme wars and cultural interventions against the monied elite, the financial fraudsters, paid-for politicians and megacorporate outposts in our cities. We kill off criminal corporations like Goldman Sachs, Exxon, Pfizer, Monsanto, Philip Morris and others that have broken the public trust.

A radical blue-green-black transformation of the current global system might sound hopefully idealistic, foolishly utopian, even radically impossible, but remember that on July 13 2011, when the first call for occupying the iconic center of global 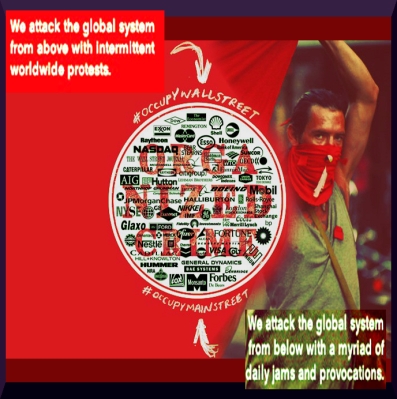 capitalism went out, it sounded all too naively absurd as well.

If you are in America, vote strategically but keep your eyes on the horizon. Our civilization remains steadfast on its economic, ecological and psychological crash course and sometime over the next few months, maybe in the new year, a galvanizing global moment of truth will happen … be ready for it … prepare yourself … stay loose, play jazz, keep the faith, wake up every morning ready to live without dead time … Capitalism is heaving and our movement has just begun.

On September 17, meet at dawn ready to rumble on Wall Street:
http://s17nyc.org/schedule/s17/

for the wild,
Culture Jammers HQ