Below I reproduce an unattributed translation from the French anarchist publication, Le Monde Libertaire, of an interview with the Tunisian anarchist feminist group, Feminism Attack! I follow that with an earlier report about the Tunisian feminist activist, Amina Sboui, leaving the Femen group and declaring herself an anarchist. Femen is a radical feminist group founded in Ukraine which has captured some media attention through its topless protests where Femen activists paint various political slogans across their chests.

One area in which Femen has been particularly active is in protesting prostitution and the traffic in women. For an anti-authoritarian critique of prostitution and its connection with male domination see the excerpts from Carole Pateman’s The Sexual Contract in Volume Three of Anarchism: A Documentary History of Libertarian Ideas. 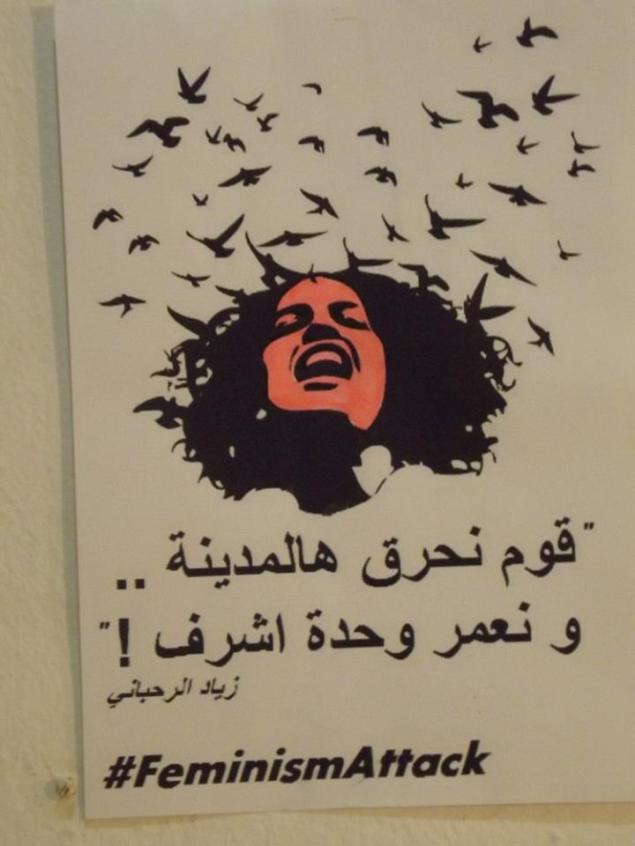 Tunisia, with a strong feminist movement for over a hundred years, is often considered the most advanced in terms of women’s rights among countries of the Muslim world. Since 1957, the Personal Status Code recognizes the rights of women, such as abortion, contraception and the right to education. Although the Tunisian feminist movements have allowed for these advances, the status of women, as in many places on the globe, is still far from anarchist ideals. Nothing new under the sun of male domination: women are still seen as mothers and wives before citizens . After a few days in, it is easy to see how the judgment of others and fear of compromising a reputation may hinder the engagement and activism of women. There are currently at least three feminist collectives in Tunisia:

Democratic Women, group consisting of bourgeois who gather themselves without political purpose or claims, Femen, recognized in Tunisia for their struggle (their actions, however, do not induce unanimous approval), and Feminism Attack, a self-managed and self-funded collective movement, whose members have an average age of about 20 years. It is inspired by anarchist ideas to search for radical solutions to social and political problems, and the dangers that threaten the position of women in society.

The movement aims to establish a self-management culture and believes in the obligation of the revolt of women against all kinds of exploitation. It challenges all aspects of the status of women in patriarchal society: abolition of stereotypes based on sex, abolition of dehumanization and objectification of women, complete elimination of violence against women (rape, domestic violence, female genital mutilation, forced sterilization, indecent assault, sexual harassment ).

We met Aika and members of Feminism Attack, with whom we conducted this interview.

Monde Libertaire: Where does Feminism Attack situate itself and what are your political leanings?

Feminism Attack: We are currently situated in Tunis and our political coloration is quite mixed. 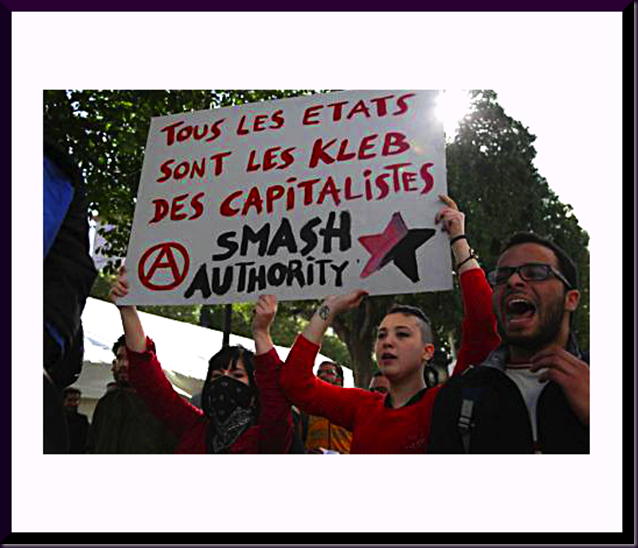 ML: Can you tell us how, when and why did your create your group?

FA: We were a group of women who shared many ideas and we came to take the same actions, but as an individuals: hence the desire to build the movement in late 2011. This decision was taken due to our awareness of the status of women in Tunisia, which is, contrary to appearances, at the limits of acceptability. Especially since the so-called acquis have been threatened by the rise to power of the Islamist party. And the so-called feminist movements that already exist have not really served the cause we advocate, they do not represent the true Tunisian women, but rather a pseudo-bourgeois image serving the system.

ML: Who are the activists of Feminism Attack?

FA: We are still a small group of pupils and students, we belong to the middle class. The age range is between 18 and 24 years. We have not yet recruited male activists, although we do not see any problem in it.

ML: What is your activism and what are your preferred actions?

FA: At the moment, we do not really have any preferred actions, we do a bit of everything… but it’s more a lack of resources and opportunities than anything else. We expect, of course, to expand our field of activity and the way we do it in the near future.

ML: How do you organize yourselves, how often do you meet each other, what equipment and means of communication do you have?

FA: We are organized around general meetings in which all group decisions are made. The frequency depends on the need of the moment. We don’t have fixed premises, we meet in cafes or public spaces… which is not very convenient since we already had the police pressure, and we are even controlled by civilians. For the moment we don’t have any materials and that is why our actions are limited to the extent that we can auto-finance and only by our own money. We communicate with all the means at our disposal (Facebook, phone, etc.).

Take your head from the clouds and go into the streets!

ML: What are the different feminist groups in Tunisia ? Your relationship with them? What do you think of Femen ?

FA: The best known is the Tunisian Association of Women Democrats, there are others , but they are not widely known or very active on the political scene. We really have no relationship with them, since we do not end up with the same principles, and our working methods are different. Otherwise, we have already expressed our position vis-à -vis Femen, we even published a detailed section on our Facebook page.

ML: Can the political agenda of Feminism Attack in Tunisia combine with other movements? With which ones and in what form?

ML: Regarding the latest popular uprisings in Tunisia, and even today, where in this dynamic could you inscribe yourself?

FA: We inscribe ourselves in any popular uprising which is the cause of the people, which is against the system, and most importantly, which is not organized by political parties, which do not serve their own agendas and do not intend to achieve power.

ML: How are Feminism Attack’s initiatives perceived by Tunisians and other revolutionaries ?

FA: Our actions do not have a great popular echo in general; Tunisians are limited to information supplied ready by the media, and apart from one or two arrests followed by sloppy and disinformative articles, we do not receive full media coverage. We do not complain really because our goal is not… chasing after glory.

ML: What are the most pressing constraints on the activists of Feminism Attack?

FA: The system and the police generally.

ML: Are cities, in your opinion, more conducive to feminist actions?

FA: In the city, the work is easier, because there is some awareness of the people, the people are more open and women more emancipated, which is contrary to the countryside, where sometimes people are literally cut off from the world. But we plan to work in rural areas as soon as we have the opportunity; we also have several projects in this regard.

ML: What are the repressive actions exerted on feminist anarchists? Are there any precautions to take?

FA: The dangers are almost the same for anyone who goes “against the current”: tear gas , batons, police violence, arrests , imprisonment, threats, etc. We have taken no real care because it would limit us tremendously in terms of actions.

ML: In addition to traditional repressive forces, what are your most formidable opponents or political enemies?

FA: The extreme political parties, which are all in the service of the same system, either directly or indirectly.

ML: Finally, what is your outlook?

FA: We expect to fight for our cause much longer and, more importantly, if our actions are successful and they serve this struggle, we can achieve real change and participate in creating a certain awareness of the people.

Amina Sboui, whose actions as part of the Femen activist organization caused significant controversy in Tunisia, resulting in her being jailed for over two months, has left the group.

She confirmed to Tunisia Live that she cut ties with the Ukraine-based organization known for using nudity in their protests, saying their actions have been counterproductive.

Sboui initially gained attention in March when she posted topless photos on Facebook with “my body belongs to me, and is not the source of anyone’s honor” painted on her chest. The photos were part of a Femen campaign.

She was arrested on May 19 in the city of Kariouan after painting the world “Femen” on wall outside a cemetery. She was released August 1 after several appearances in court, but still faces a charge of desecrating the cemetery.

This  is Amina’s last portrait released before leaving Femen, (saying they are too anti-Islamic in Tunisia to be effective) and moving close to the Anarcha Feminists. She appears to be symbolically lighting a molotov against the so-called democratic process, and has an anarchist symbol pàinted on her shoulder.

Amina Sboui told Tunisia Live that her trial may convene again next month, but she is not sure of the exact date. She says she will appear before the court again whenever she is called, and said she is guilty of nothing.

Sboui also commented on her most recent topless picture, released last week. In the photo, she lights a cigaratte with a Molotov cocktail with two anarchy symbols on her shoulder and “we don’t need your dimocracy [sic]” painted on her chest.

“Anarchy is the only solution” given the current state of affairs in Tunisia, she said, explaining the image.

Word of her departure from Femen came after she was temporarily detained after a protest this weekend.

Sboui and three members of the Feminist Attack organization, a radical anarchist, feminist activist group, were held by police for three hours on Sunday after throwing paint and eggs at the Ministry of Culture headquarters.

Sana Chamekh of Feminism Attack said the action was intended to show solidarity with Nasreddine Shili, an actor who reportedly threw an egg at Minister of Culture Mehdi Mabrouk last week.

The four were released after refusing to sign a police report of the incident, according to Chamekh.

Chamekh said that while her organization had known Sboui before her activities with Femen, with whom they are not aligned, she was working with them independently.

Sboui says she is discussing potential membership in Feminism Attack with them, but is currently not associated with any group.