The hackers left a deface page along with a brief message explaining the reason for defacing the site and criticizing the role of “political elite” for the problems faced by “common people.” The message also criticized the role of Bilderberg group for planning wars for personal interests.

The hackers also warned the group members to start working for human beings and their benefits rather than personal interests or expect more hacks since “they” the hackers will be watching them.

“Dear Bilderberg members, from now, each one of you has 1 year (365 days) to truly work in favor of humans and not your private interests. Each TopIc you discuss or work you achieve through Your uber private meetings should from now benefit world population and not X or Y group of people otherwise, we will find you and we will hack you,” according to the message.

Here is a full preview of the deface page left by Anonymous and HackBack movement (from Google images): 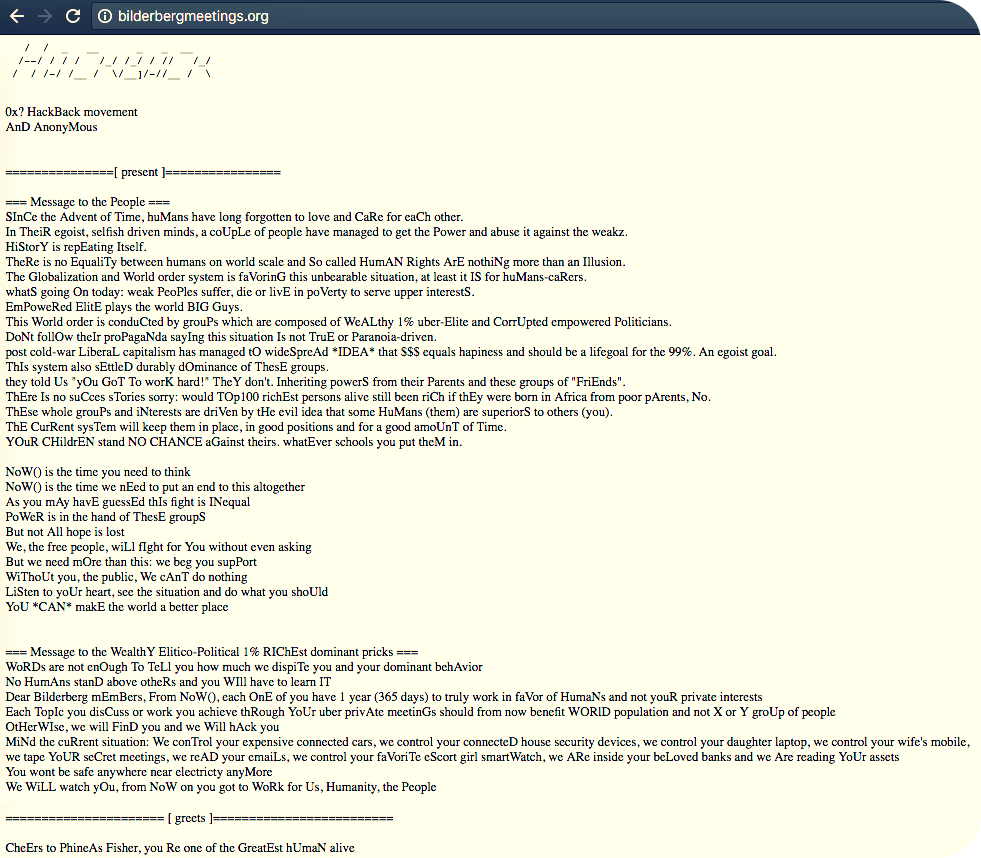 If you are not aware of the HackBack hacker and their movement then HackBack also goes by the online handle of “Phineas Phisher” “Hack Back!” and “@GammaGroupPR” who came in the news some months ago after donating around €10,000 (about £8,000) Bitcoin to a Kurdish anticapitalist group “Rojava Plan” that is based in Rojava.

The hackers then hacked the Catalan Police Union server and leaked highly sensitive data against police brutality. The same hacker then hacked Spanish Police server and ended up leaking personal details of police officers against the infamous Gag Law. Remember, it was the same law that forced a woman to pay a fine of 800 euros/$889 for uploading a picture on Facebook showing a police car parked in a disabled spot, and even prosecuted youths for wearing ACAB T-shirts

As far as the Bilderberg group is concerned, this is not the first time Anonymous hacktivists have successfully targeted their website. In June 2016, the group conducted a DDoS attack on Bilderberg Group website forcing the site to stay offline for hours when the group was having a meeting in Germany!

At the time of publishing this article (31/12/16), the targeted website was still hacked with the defacing page uploaded by the hackers….

We have the choice right now to change our world collectively

One of the world’s most secretive groups that’s filled with very wealthy and powerful individuals, just got hacked. The official website bilderbergmeetings.org, now has a cryptic yet powerful message on it. The message had a direct warning to the “Wealthy Elitico-Political 1%” that they have a year to work for the benefit of humanity or their assets will be hacked next.

“Dear Bilderberg members, from now on, each one of you have 1 year (365 days) to truly work in favor of humans and not your private interests,”

The message comes from hackers identifying themselves as Anonymous and HackBack. They go on to say:

The Bilderberg meetings have evaded the public for decades with their closed door policy and media blackout. Speculation as to what actually goes on in these meetings has kept truth-seekers of all kinds on their toes. Topics like New World Order, hidden agendas and economic collapses often come up when discussing this particular group.

Made up of European and American leaders from various industries such as media, academia, finance, politics and tech, the club has been meeting since 1954. The most recent meeting (64th) was held in Dresden, Germany earlier this year.

While the later part of the hackers message on the Bilderberg website was addressing the elite and their explicit warning to them to start doing service in the interest of all people, the beginning was addressed to us, Humanity.

They outlined quite powerfully how in a sense we’ve been duped. “They told us “you got to work hard!” They don’t. Inheriting powers from their parents and these groups of “friends” “. In fact we’ve been sold this idea of what life should be like that is so far from what we are actually capable of achieving. Why?

Our Chance To Wake Up

The very essence of this Anonymous and HackBack message begs that exact question, but it then goes beyond it by giving people the opportunity to wake up to their own power.

Isn’t that what this is all about? Holding peoples’ consciousness in a type of psychic paralysis where they are so far detached from themselves they have no idea what’s real anymore.

It can be confusing. Because, if you’re not using your power, someone else might be.  But, what happens when these powerful elitist groups are exposed, just as we are seeing now, for who they really are?

That is for you to dive deep within yourself and find out. But for now, I will offer this perceptive.

When more people start realizing that we too are mighty and powerful and shift their perspective to one that is more cooperative, less competitive, one that is more heart-based, and less mind based, we see what freedom- real freedom- feels like.

Seeing this message on this particular group’s website excites me because I think the veils that hinder us from seeing clearly are slowly being lifted. If you want them to be.

We have the choice right now to change our world collectively and that is exciting to me. This is all part of the shift in consciousness taking place, and things are getting REAL.

2 thoughts on “Anonymous attacks the 1%.. HACKS and threatens BILDERBERG billionaires”