The indigenous peoples of Saramurillo (Peruvian Amazon) have held an Uprising for four months to stop the destruction of the environment and constant spills from the Petroperu pumping plant and the obsolete Norperuano Oil Pipeline. (en castellano abajo)

There is a corner of the Amazon where the environmental devastation generated by the oil industry have left all passivity behind. This place is called Saramurillo. Since the beginning of September 2016, there has been a rebellion and mobilization of the indigenous peoples affected by the consecutive spills suffered in their territories.

They left their communities and occupied the Petroperú pumping plant. They moved there to prevent their environmental exile, a destination that seemed to be written for them. After months being ignored, the Government agreed to a dialogue with the Resistance Platform. But the negotiation looked complex and tortuous.

Its rivers, its cochas (wetlands), but also the hunting and the fish that people  consume are all contaminated. There have already passed four decades of hydrocarbon exploitation that has left pitiful consequences in the territory.

First there was Occidental, then Pluspetrol, and now others like Pacific, Perenco, Talisman, Cepsa and other multinational corporations. Through intentional discharges with very high concentrations of metals into the headwaters of the rivers they have become salinized – The accumulated residual oil, pumped into ‘ponds’ without waterproofing and endless “accidents” occur and have occurred for decades.

The indigenous peoples, who  are from the Achuar, Quichua, Shawi and Urarinas, living on the rivers Corrientes, Pastaza and Tigre, were poorly compensated with some public works and sources of employment.

However, the time of ‘the bonanza’ has long passed. The oilfields no longer produce what they used to: if in 1982, the date of the zenith of production in the Northern Forest, 120,000 barrels per day were taken out, in 2015 the 201 operational wells barely produced 21,953 barrels per day.

As a result of so many years of contamination, notable projects such as that of the North Oil Observatory (Observatorio Petrolero Norte),have emerged in the area, with an emphasis on the mapping of spills and the detection of heavy metals. The results are alarming, but there has been no reaction in public policies.

The Norperuano Pipeline traverses kilometers of jungle and the Andes to bring oil sucked out of the Amazon to the export port of Talara. According to the state agency Osinergmin, this infrastructure already had a history of more than 60 breaks until this year.

To exacerbate the situation, in 2016 a series of periodic accidents of the Norperuano Pipeline have unleashed at least 10 more spills into the ravines and tributaries of the Marañón river.

This obsolete structure, inaugurated in 1976, has a state of advanced deterioration. The same government enforcement agency, the OEFA, has repeatedly fined Petroperú, a state-owned company that operates the pipeline. But the fines have not stopped the frequency of the spills. On January 25 last year, a leak of 3,000 barrels of crude oil contaminated the Inayo and Chiriaco rivers. A dozen Awajún communities were impacted.

A year later they still detect “glitters” on the surface of bodies of water, a resource they have to consume daily, despite the recommendation from the Government not to bathe or fish .

A week later, in the Wampis community of Mayuriaga, a spectacular break left at least 22 kilometers of jungle impregnated with crude. On June 24, another spill was reported in Caño Barranca.

On August 10, yet another spill in the Nieva district poured out 2,100 barrels and just two weeks later, two breaks a half kilometer away left a lagoon of 4,000 barrels of oil in the Kukama community of New Alliance.

The year ended with new spills in the communities of Monterrico, July 6, Maipuco, Naranjal and Nucarai.

The affected communities feel abandoned by a State receiving the royalties generated by this industry. With concern, they know the background of the Kukama communities of San Pedro and Cuninico, victims of a spill of the same oil pipeline in 2014.

Two years later, the ingestion of contaminated fish has caused the accumulation of toxic metals in the blood of its inhabitants, as detected The Ministry of Health in January 2016. Out of a total of 600 inhabitants of Cuninico and 200 inhabitants in San Pedro, 129 samples of blood were taken for lead level testing and 126 urine samples for the dosage of arsenic, cadmium and mercury.

Saramurillo: mobilised for a Total Struggle

It is in this context of extreme state neglect of the peoples who suffer the environmental liabilities that in September 2016 the mobilization of Saramurillo exploded. From several river basins entire families moved from their communities to join their voices in a plethora of requests.

With measures of direct non-violent action, they took over the facilities of Petroperú and blockaded for two months the great boats that carry oil and other goods by the river Marañón.

Women have also become protagonists of this struggle. Luz Leni Curitima Irarika, a mother of the native community of Concordia, affirmed to this reporter: “We are here in a struggle because 40 years ago the State violated our rights and we will continue here until we find a solution. As mothers, we have children who also become contaminated because there are too many spills… ”

About her role in this fight she recalled that “first there were only pickets of men, but then we met and we decided to pick only women, because women solve other conflicts that men do not solve.” She emphasized the role of care that they contribute to sustain this long mobilization: “We are 51 people here. They needed common meals so we can all eat and collaborate in the fight. ”

From deep within the Amazon, their voices have begun to echo. Their demands are summarized in seven points that are being addressed in an “Intercultural Political Dialogue” process. They demand the replacement of the pipeline, for not guaranteeing conditions of transport in the future.

They request the revision of the Pluspetrol Norte contract and the environmental remediation of lots 8 and 192. They also want a law that obliges the environmental monitoring of the five affected river basins and the creation of a Truth Commission that objectively investigates the impacts.

They question the extractive monoculture as the only source of wealth in the region. And they also demand compensation for the environmental impacts they have received.

Lastly, they appeal against the criminalization of the protest, taking into account the judicial antecedents that derived from the previous Amazonian uprising, in 2009.

At first, this Amazon rebellion received absolute deafness from the Government and public opinion. But the tenacity and active resistance of those mobilized, whose protest has lasted for almost three months, has forced the State to pay attention to this conflict.

At the end of November negotiations were held in Lima, to which a delegation of 80 indigenous people travelled. It opened the way to dialogue. Subsequent sessions were held right on the banks of the river Marañón, in Saramurillo, the epicenter of the struggle. There, are now, high-level government delegations of the new president Pedro Pablo Kuczynski (PPK). On December 7, after the abrupt resignation of the energy and mines minister, the rope was tightened again. 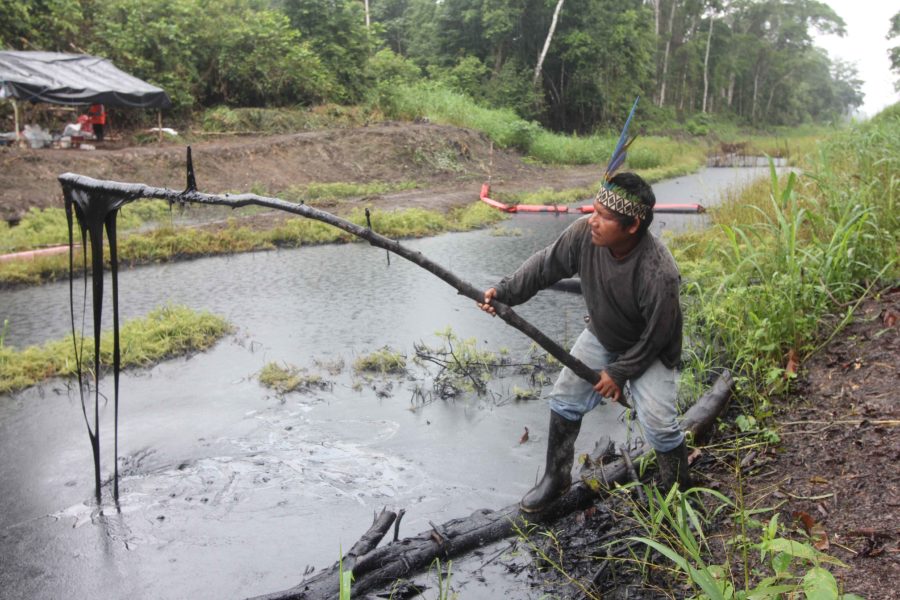 Alerted by the movement of barges of Pluspetrol transporting oil, the mobilizers pursued and reached these boats to stop and blockade them again, in Saramurillo.

At the end of the afternoon, it was agreed in an assembly to release the ships to demonstrate the desire for political debate demanded by the communities in struggle.

Finally, after repeated requests the president of the Council of Ministers present himself for an agreement, Fernando Zavala appeared in Saramurillo in a final act of signing the agreement with 19 points already debated and closed on December 19 in Saramurillo, amid an Amazonian rainstorm. It remains to be seen if this new agreement will be ignored.

The objectives of this Uprising pursue complex solutions, because the contamination of large areas of the Amazon is a problem that can no longer be postponed. The future of these peoples depends on oil-free rivers.