So I approach announcements of new releases—both these are from North Africa—with some apprehension. After screening the productions under review here, my fear dissolves.

“Youm el-Setat” (A Day for Woman)Tunisia (through the films of Moufida Tlatli) and Egypt are highly regarded in the film world. Particularly Egypt with its glorious history of filmmaking and its distinguished line of actors proves its mettle in “Youm el-Setat” (A Day for Woman). This playful drama about serious issues becomes heartwarming and totally engaging in the hands of director Kamla Abu Zeki.

Three love stories and women’s eternal search for fulfillness is the focus of “Youm el-Setat”. The plot evolves around a neighborhood pool where a day a week is allocated for girls and ladies. Azza who initially appears simpleminded takes the first plunge. Eventually the whole neighborhood follows her and together they assert their solidarity and their rights. 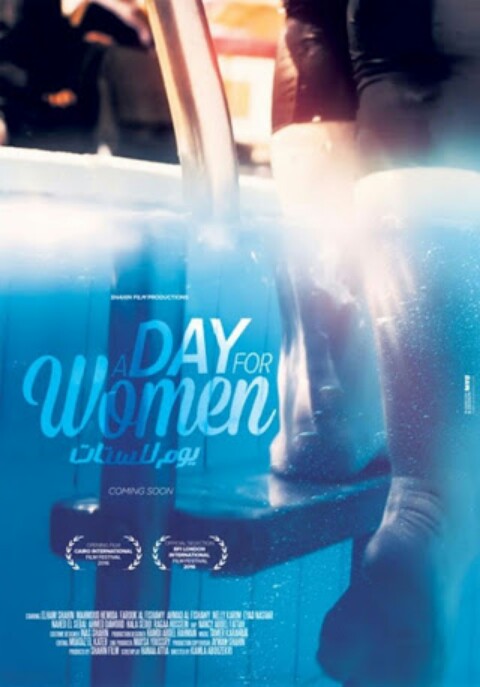 Scenes of their celebratory escapades are delightful; pool frolicking along with street encounters immerses us in that Cairo neighborhood.

The story rises above place and religion, beyond covered or uncovered heads. Emerging romances threaded within this drama could happen anywhere.

Young Azza, it turns out, is not so simpleminded. She’s just naturally liberated! She’s attracts others with her naive joyfulness. Samiya too is a free-thinking woman from the moment we meet her although neighbors initially view her as a sassy whore.

Her humor and honesty explode into courage and passion when, finally, she approaches Ahmed, a longtime sweetheart—both are by then middle-aged—to consummate their love. Laila, a forlorn young widow, belatedly joins others in the pool and awakens.

Finally she can respond to the tenderness of the likable guy who as pool manager had launched this day for women. (A day for women becomes the ‘time for women’.)

It’s a film to swim along with.

“El Jaida” (The Jailer) by Tunisian director and actor Selma Baccar takes an altogether different approach to oppression and women’s determination to be free of patriarchal domination. In contrast with the Egyptian film, “El Jaida” is humorless.

The lives of these Tunisian women seem irredeemable. Although defiant, they are an unhappy lot. The injustices they face are manifest in the family, but the story points elsewhere. Drawing on Tunisian historical experience, the film underscores how gender relations and politics intersect.

The story largely takes place in the 1950s when across the region the anti-colonial movement erupts. The story begins with a well-to-do housewife confronting her husband’s infidelity, then finds herself confined with others in jail. Initially adversaries, after learning each other’s stories, the women come together.

While outside the prison’s walls, the nationalist movement to end French rule is gaining strength. The story abruptly shifts 50 years ahead to 2017. The occupiers are gone; so is the dictator. Baja, the film’s main character, has become a member of Tunisia’s new parliament where we find her reading the newly promulgated code establishing women’s equal rights in Tunisian law.

Both films premier in coming weeks at the New York Diaspora International Film Festival. For more than 25 years, ADIFF has been introducing to American audiences a taste of the extraordinary film making talent at work beyond American shores.

Note to readers: please click the share buttons above. Forward this article to your email lists. Crosspost on your blog site, internet forums. etc.

Barbara Nimri Aziz is a veteran anthropologist and radio journalist, also author of Heir to A Silent Song: Two Rebel Women of Nepal, published by Tribhuvan University, Nepal, and available through Barnes and Noble in the USA. She is a frequent contributor to Global Research and Asia-Pacific Research.

India: Violations of the Right to Food and Work Rampant Across the Country, Made Worse by Aadhaar