Fall of Empires: London, Washington & Paris on brink of collapse (by George Galloway)

Despite the thrashing around of the NATO disinformation apparat, the imperial heartland has entered 2019 in a state of complete chaos.

Washington, London, and Paris – the three capitals of the Empire – are today effectively ungoverned, shutdown, tottering on the brink of collapse or under siege by their own people.

‘It’s high time citizen’s groups abolished the central state and the 1% and reorganised society from the bottom up’.

We should start at the top of the Empire. The United States government has closed down amid stasis and a barrage of inter-governmental howitzers.

The defense secretary, ‘Mad Dog’ Mattis, has resigned as have other uniformed subalterns angry at the president’s re-found determination to withdraw from costly and losing foreign wars. The actual “mad dog” – John Bolton – openly defies President Trump over Syria, Mueller closes in, and the new Democratic majority in the House gears up to “impeach the mother***er.”

Nobody knows if President Trump will be around for much longer, and the merest glance at the views of his putative successor – Vice President Mike Pence – recalls the famous picture of President Nixon with his vice president, Spiro Agnew, standing behind him. The satirical speech bubble had Nixon pointing over his shoulder and saying “nobody is going to shoot me with this guy next in line.”

In London, British Prime Minister Theresa May is a dead woman walking; Britain’s exit from the European Union is still a matter of total uncertainty, yet a mere 80 days away. Violence outside the Parliament has begun to erupt, no faction can command a majority, an election cannot be held because its most likely result would be the election of veteran anti-imperialist Jeremy Corbyn whom the ‘deep state’ would sooner see under arrest (alongside this writer, according to the coup-apparatus Integrity Initiative).

The left-wing ‘People’s Assembly’ activist group has invited thousands of people to wear yellow vests at an anti-austerity “Britain is broken” march in central London on Saturday 12 Jan.
“See you on the streets and don’t forget your #YellowVests,”

A no-deal Brexit will see the south of England grind to a halt given the lack of preparation for it, as trucks headed to and from the continent turn Kent, the ‘Garden of England’, into a car-park.

A Brexit in name only – otherwise known as Theresa May’s deal – cannot pass in the House of Commons next week given Labour’s opposition together with at least 50 of the government’s own MPs and the 10 members of the coalition partners, the DUP.

A third option, a new referendum, runs the risk of the same scenario being played out (but almost entirely unreported here) on the streets of Paris and other French cities. Defying the result of the first referendum, cheating 17.4 million people of that which they voted for, risks social peace in England. Millions of Brexit voters are among those in Britain with nothing left to lose.

In France, the Elysee has become Macron’s Bastille and it is not at all inconceivable that it will be stormed.

Last weekend his own spokesman had to be smuggled out of a back-door after a truck hijacked by protestors smashed through the door of his government building. The very conditions Macron strove so very hard to bring about in Damascus and that France DID help bring about in Kiev are now rocking the very foundations of the French Republic.

Yellow Vest protesters are hoping to trigger a bank run with a nationwide coordinated cash withdrawal (starting Sat. 12th Jan).. By threatening the French financial system, protesters say, they want to peacefully force the government to pass their reforms.

Furious yellow vests are preparing to withdraw all their euros in a massive run on French banks, as the violent protests spill over to Britain.

No amount of turning the ‘Nelson’s Eye’ (when famously England’s Admiral Lord Nelson at the Battle of Trafalgar was told that the French Navy were advancing on him, he put his telescope to the black patch covering his missing eye and said “I see no ships” – will alter the fact that for eight weeks and counting, hundreds of thousands of French people of all political stripes have been – increasingly violently – on the streets of cities throughout the country demanding that their president resign.

And that Macron showering Euros down the Champs Elysees in concessions – in absolute defiance of the EU’s fiscal rules – has merely encouraged ‘les autres’ to keep on demonstrating. 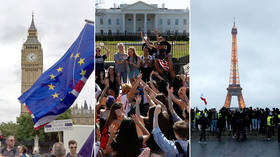 This week, the EU (and NATO) government of Italy joined the side of the ‘Gilets-Jaunes’, with Italy’s Salvini personally denouncing the French president as being “against his own people.”

This Saturday, a mammoth demonstration will take place in London,leveling the same raft of anti-austerity demands on the British government as the Yellow Vests are making of Macron. The center cannot hold.

The old order is dying; the new one cannot be born. If we are not careful we will soon be alive in the time of monsters.

‘It’s high time citizen’s groups abolished the central state and the 1% and reorganised society from the bottom up’.

Furious yellow vests are preparing to withdraw all their euros in a massive run on French banks, as the violent protests spill over to Britain.

George Galloway was a member of the British Parliament for nearly 30 years. He presents TV and radio shows (including on RT). He is a film-maker, writer and a renowned orator.