see original with Tweets and videos here:https://itsgoingdown.org/category/columns/this-week-in-fascism/ This Week in Fascism #64m 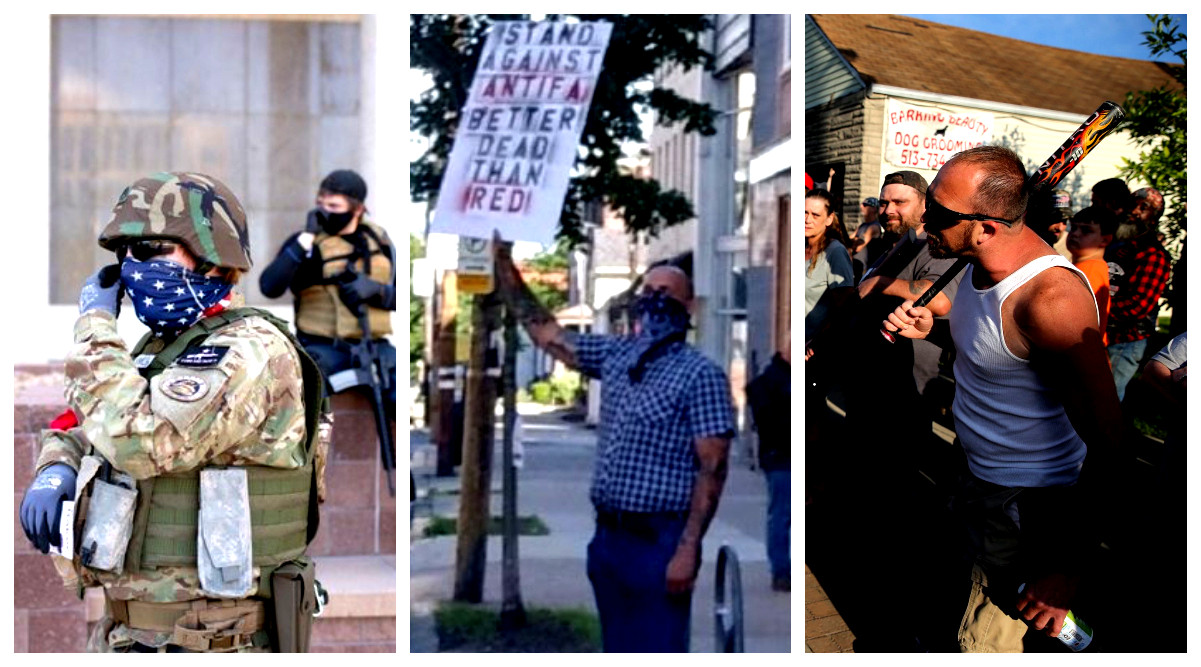 Meanwhile, a Boogaloo PR manual has been leaked, a slew of arrests have taken place following previous far-Right incidents and attacks and we got doxxes of Operation: Werewolf, the Three Percenters, and more!

Protesters attempting to pull down a statue of Conquistador Juan de Oñate, a brutal colonial governor who oversaw Spanish rule and the 1599 Acoma Massacre, faced off against heavily armed members of the New Mexico Civil Guard today. At one point, a counter-demonstrator took out a pistol and was pushed away from the statue by demonstrators, after which he opened fire, injuring one person who was taken to the hospital.

Police then made several arrests of armed militia members. Social media identified the shooter as Steven Baca, the son of a former Sheriff and once a Albuquerque city council candidate who also traveled to the 2016 RNC convention as an Alternative Delegate.

#Albuquerque activists IDing shooter as son of former sheriff who once ran for City Council because he “felt compelled to seek his first elected office out of fear [of] the community… becoming a “third world country.” Also attended #GOP convention in 2016 as an alt-delegate. https://t.co/mAX3Mk2MEG pic.twitter.com/uzMENWgfg

Nick Estes of the Red Nation reported that, “On the Abq police scanners, cops referred to the New Mexico Civil Guard as “armed friendlies.”

Members of armed vigilante group New Mexico Civil Guard just gunned down one of the protesters who were pulling down a statue outside the Albuquerque Museum. The shooter said “My father is the BCSO (Bernalillo County Sheriffs Office)”. https://t.co/GAzUgz5dJY pic.twitter.com/i6Ff1YJexY

Neo-Nazis showed up outside of anarchist bookstore in #Pittsburgh today to rally “against antifa” + pulled a gun on members of the community. PA Neo-Nazi groups like the Keystone State Skinheads have been around for decades + are involved in the local GOP. https://t.co/IwCxU1SDJv pic.twitter.com/IfxGrGF30u

About 15 neo-Nazis, some associated with the Keystone State Skinheads/United street gang, held an “Anti-Antifa” rally outside of an anarchist bookstore in Bloomfield, Pennsylvania. The racist skinheads, many with visible neo-Nazi tattoos, attempted to distribute flyers attacking the bookstore as “ANTIFA,” as dozens of community members mobilized to oppose them.

According to the Filler Collective:

Around 6:45, [reports of] one fascist assaulting someone who was documenting his activities outside of Silky’s Bar on Liberty Ave. Around 6:45, police arrived at the scene outside of Silky’s Bar. The police and several others separated the fascists from the locals and two officers briefly spoke to two of the neo-Nazis. A few minutes later the police and the Nazis shook hands and went their separate ways.

A few blocks up the street, another splinter group of four Nazis began taunting 10 local anti-fascists and other residents outside of Lou’s Corner Bar. As the video shows, the Nazis went to their parked vehicle. One of them pulled a handgun out of the backseat, chambered a round, and threatened the people filming him. The neo-Nazis drove off shortly after.

We are no longer able to document the ongoing, escalating Marconi Plaza South Philadelphia vigilante incident after @PhillyPolice ordered us to leave or be arrested. We were told we no longer had the right to document this event. pic.twitter.com/U6kRm7owXl

Unicorn Riot reporter Chris Schiano was attacked by a vigilante gang of white men armed with baseball bats and guns while reporting on the group defending the Christopher Columbus statue in Philadelphia’s Marconi Plaza.

“You’re so scared. Aren’t you embarrassed?” asked the man who initiated the attack on Schiano, later identified by antifascist researchers as John P. Alice, 36, of Philadelphia, owner of JA Painting and Remodeling. Alice began the attack by hitting Schiano’s bicycle with a metal bat. “So what do you think about how Christopher Columbus cut off the hands of people who didn’t bring him enough gold?,” Schiano asked, continuing to report. “They were fucking savages back then,” answered one of group. In total, the group numbered around 100 people, almost exclusively white.

At that point, a man hit Schiano in the head while his bicycle was grabbed. Though police were watching, they did not intervene. “If you’re gonna talk shit, get the fuck out of here,” said the man with Schiano’s bike as he dumped it on the sidewalk. At that point, another man grabbed Schiano and shoved him while a third man, wearing a Frank Rizzo t-shirt, pulled a knife and slashed both tires on Schiano’s bike. (Rizzo was a former Philadelphia Police Commissioner and Mayor with a long history of brutality, corruption, and racialized policing).

This clip clearly shows one man yell “kill him” as a group of right-wing Columbus statue protesters charge our reporter and beat him.

We will release footage soon showing repeated violent threats made towards reporters and anti-racist protesters in Marconi Plaza -we lost count. https://t.co/vGj00k4HNH

Schiano continued to film the vigilantes from the sidewalk for a few more minutes before he rushed by another man, identified by antifascist researchers as Michael Renzulli, Block Captain for 12th and Ritner, and the owner of Philly’s Finest Construction. A police officer then threatened Schiano with arrest for inciting a riot. Antifascist researchers quickly identified the officer as Captain Louis Campione. Antifascists also identified Anthony Fusco as one of the men present. Police did not arrest anyone in connection with the incident.

“We are aware of the groups of armed individuals ‘protecting’ the Columbus statue in Marconi Plaza. All vigilantism is inappropriate, and these individuals only bring more danger to themselves and the city,” Philadelphia Mayor Jim Kenney tweeted the following morning. “We are also aware of an apparent assault caught on video tape, as well as possible restrictions placed on journalists filming the event. These incidents are under investigation at this time.”

According to some reports, Michael Renzulli has been removed from his current post following the incident. Currently, there is a call from pro-police residents to rally in support of Renzulli, who they say has been reassigned to another part of the city.

Hundreds of people converged in rural Bethel, Ohio, as Black Lives Matter supporters were violently opposed by armed Trump supporters, leading to clashes over the course of two days.

According to Raw Story:

A group of armed motorcyclists and others showed up wearing Confederate flag, Punisher and Trump-themed hats and clothing, some of them apparently drawn by online warnings that the demonstration was organized by Antifa activists.

“Around 3:30, the… counterprotesters?, started walking down on the other side of the street from up town, yelling obscenities and threatening us,” wrote demonstrator Abbi Remers, whose brother was punched and knocked to the ground.”A few started coming over and ripping signs out of our hands, ripping the hats and masks off of our faces, ripping things out of our pockets. Then they started surrounding us.”

The counter protesters assaulted some of the demonstrators and screamed at the group to go back to Cincinnati, which is about 30 miles west of the rural Clermont County village. “Traitors, take your ass back to the parking lot!” one man screams at a protester who had been violently attacked in the street and sent away by police. “A bunch of f*cking traitors.”

Numerous videos show counter protesters menacing the demonstrators with ideas seemingly drawn from the president’s Twitter feed about the protests following George Floyd’s police killing. “You’re in the wrong town,” said one man carrying an American flag. “Get this on your phone — this ain’t Seattle. You’re not in a Democratic state here. We don’t put up with that sh*t. All lives matter.” “This is a f*cking Republican state, b*tch,” shouts an even louder man. “We don’t play here.”

As the protests entered into a second day, the Mayor installed a curfew. Many have pointed out that the far-Right mobilization was brought on by the spreading of “ANTIFA” conspiracies, which have been propagated by white nationalist groups online.

On the move. @Local12 pic.twitter.com/KtquWI49ct

I’ve updated my interactive webmap of vigilante incidents. Thanks to @BenLorber8 for furnishing me with more exhaustive data. We now have documented cases in 150 counties amounting to 189 discrete incidents. (See link)https://t.co/270EqAytYR pic.twitter.com/J55JPYl4gC

Researcher Alexander Reid Ross released an interactive map of white reactionary vigilante posses that have sprung up in the wake of nationwide anti-police protests. The map documents 189 incidents in 150 counties nationwide.

Far-Right brawlers linked to numerous assaults on members of the public and anti-racist protesters “Tiny” Toese and Joey Gibson are at the #CHAZ in #Seattle. Both have worked for years with neo-Nazis and white nationalists at various far-Right demonstrations. pic.twitter.com/e6x5isLq1d

After two weeks of protests, riots, and intense police and military occupation of the Capital Hill neighborhood in Seattle, Seattle Police boarded up and left vacant a precinct building. Over the next week, a flourishing autonomous zone has developed, resulting in a cop-free zone, growing mutual aid projects, and space for political organizing – resembling to many a large block party. Fox News and far-Right media has seized on this new experiment, dubbed the Chapel Hill Autonomous Zone (CHAZ), and painted it as a violent threat to the entire American system.

Towards this end, in the past week, far-Right grifters like Andy Ngo and mainstream networks like Fox News have been caught promoting conspiracy theories and outright hoaxes. This includes the lie that protesters were shaking down business owners for “protection money” along with a host of other fabrications.

Scooplet: The pro-Trump organization, “Bikers for Trump,” aren’t pleased with the “fake news” from right-wing outlets such as The Gateway Pundit and Big League Politics. https://t.co/kn1eoT3Ng2

Fox News then upped the ante, by producing a series of photo-shopped images for a series of articles that played up the idea that the autonomous zone was rife with chaos and violence.

Far-Right conspiracy sites like The Gateway Pundit and Big League Politics also pushed false claims that members of Bikers for Trump would descend on the CHAZ to clear out the ‘ANTIFA’; claims which Bikers for Trump denied.

Grifters like Jack Posobiec, Andy Ngo, Joey Gibson and a host of lesser known trolls have now all descended upon the area in the search of click-bait content and to encourage fascist violence. On Monday, June 15th, this violence began to place, when Tiny “Toese” along with several other Proud Boys, some armed with hand guns, beat a man right outside of the CHAZ.

Tiny Toese, a Proud Boy brawler from #Oregon on probation for multiple violent assaults along with several Proud Boys armed with pistols beat a man outside of the #CHAZ today in #Seattle as he asks for his “phone back,” which they smash on the ground before driving away. pic.twitter.com/Nc01maYVer

In a later interview, the man who was attacked by Tiny and other Proud Boys said he had been following and documenting the group throughout the day and when they entered into a white van without any plates, they attacked him in order to take his phone and destroy the footage.

And guess what? They know damn well they’re trying to hijack BLM.

“Speak their language and use their language to subtly inject pro-2A messaging,” the guide offers. “Use a neutral or sympathetic message on your sign or poster if you’re bringing one. Confuse leftists and introduce cognitive dissonance in their minds at first sight. They’re more likely to be receptive of you or question their own prejudices if you carry a “Black Lives Matter” poster rather than a Gadsden Flag. Again, use their own language to promote a pro-2A Narrative.”

see original with Tweets and videos here:https://itsgoingdown.org/category/columns/this-week-in-fascism/ This Week in Fascism#64: