Kramatorsk train station attack: The key to finding the perpetrator lies in this overlooked detail

Scott Ritter is a former US Marine Corps intelligence officer and author of ‘SCORPION KING: America’s Suicidal Embrace of Nuclear Weapons from FDR to Trump.’ He served in the Soviet Union as an inspector implementing the INF Treaty, in General Schwarzkopf’s staff during the Gulf War, and from 1991-1998 as a UN weapons inspector.

Kiev and its Western backers immediately blamed Russia for the incident, but a proper investigation is likely to disagree

In a conflict where accusations of wrongdoing fly back and forth between Russia and Ukraine on a daily basis, when it comes to the missile attack on the Kramatorsk train station that occurred at 10:30am on April 8, 2022, both sides are in rare agreement – the missile used was a Tochka-U, a Soviet-era weapon known in the West by its NATO reporting name as the SS-21 Scarab, and in the former Soviet republics that use the weapon by its GRAU designation, 9K79.

Beyond that one technical piece of information, however, any semblance of unanimity regarding the narrative surrounding how that missile came to strike a bustling railway station, killing and wounding dozens of civilians desperately trying to evacuate from eastern Ukraine in anticipation of a large-scale Russian offensive, collapses, with each side blaming the other. Making this tragedy even more bizarre, the Russian words Za Detei – “for the children” – had been hand-painted on the missile in white.

The Tochka made its appearance in the Soviet military in 1975. A single-stage, solid-fuel tactical ballistic missile, the Tochka was assembled at the Votkinsk Machine Building Plant before being delivered to the Soviet Army, where it was further disseminated to the various units equipped with the system. An improved version of the Tochka, known as the Tochka-U (Uluchshenny, or “improved”) was introduced in 1989; the improvements included increased range and accuracy.

The Tochka-U operates as a simple inertially-guided ballistic missile. Simply put, the operators, working from a known location, orient the launcher in the direction of their target, and then calculate the distance between the point of launch and point of impact. The solid-fuel engine of the Tochka-U burns for 28 seconds, meaning that the range of the missile isn’t determined by engine burn-time alone, but rather the angle that the missile was launched – the more vertical the missile at time of launch, the shorter its range will be.

Because the missile burns to depletion, once the engine shuts down, the missile will cease its pure ballistic trajectory, and instead assume a near-vertical posture as it heads toward its target. The warhead is released at a designated point above the target. In the case of the Kramatorsk attack, the Tochka-U was equipped with the 9N123K cluster warhead, containing fifty submunitions, each of which has the effect of a single hand grenade in terms of explosive and lethal impact.

The flight characteristics of the Tochka-U result in a debris pattern which has the cluster munitions impacting on the ground first, followed by the depleted booster, which hits the earth some distance behind the impact of the warhead. This creates a tell-tale signature, so to speak, of the direction from where the missile was launched, which can be crudely calculated by shooting a reverse azimuth from the point of impact of the warhead through the booster.

It is this physical reality which provides the first real clue as to who fired the Tochka-U that hit Kramatorsk. The relationship of the booster when it came to earth, when assessed to the impact zone of the cluster munitions, provides a reverse azimuth which, even when factoring in a generous margin of error for potential drift, points to territory that was under the excusive control of the Ukrainian government, which means that there is little doubt that the missile that struck the Kramatorsk train station was fired by a launcher under the operational control of the 19th Missile Brigade, Ukraine’s only Tochka-U-equipped unit. More specifically, a forensic evaluation of the missile debris clearly shows that it was launched by the 19th Ukrainian Missile Brigade, based near Dobropolia, some 45 kilometers from Kramatorsk.

The 19th Missile Brigade is considered a strategic asset, meaning that it responds directly to the orders of the Ukrainian Ground Forces Command. In short, if the missile was, as it appears, fired by the 19th Missile Brigade, it was doing so based on orders given from high up the chain of command. The launch was no accident. 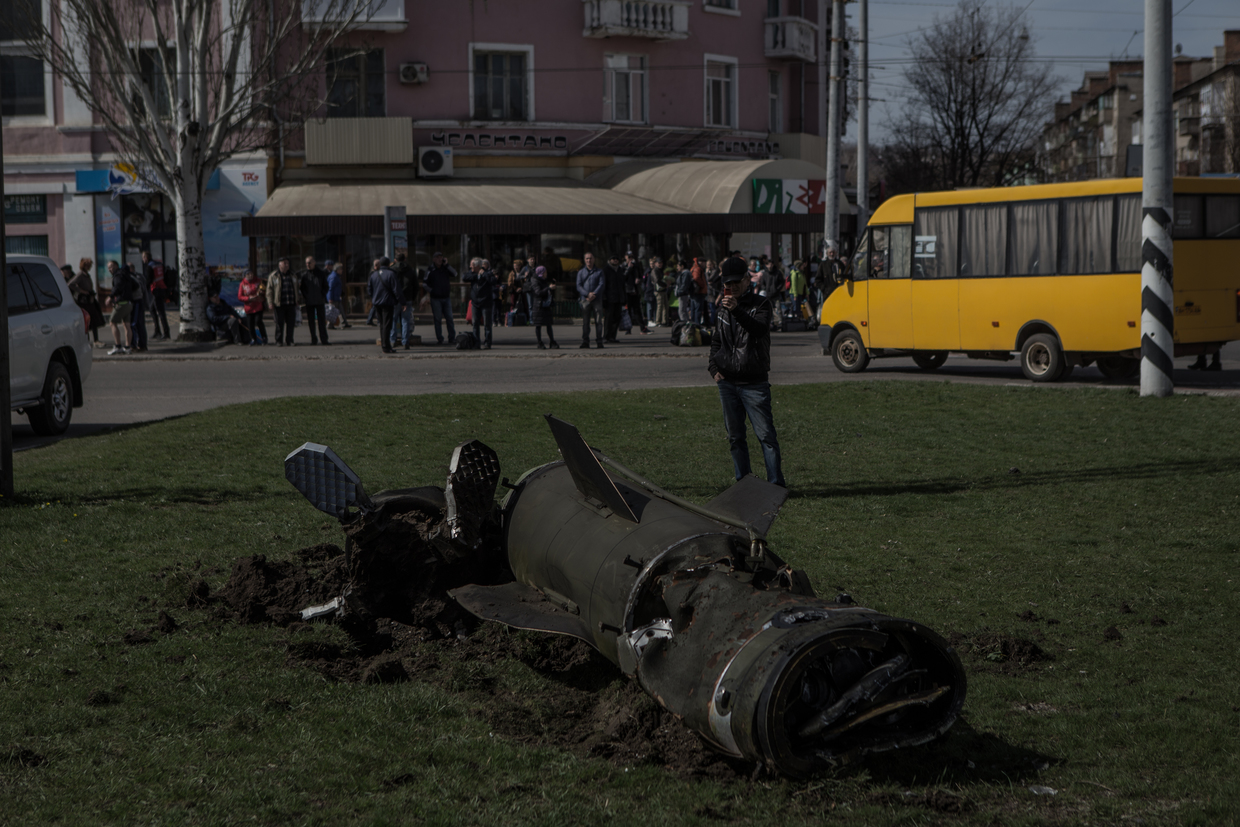 For its part, the Ukrainian government has attempted to flip the script, blaming Russia for an attack using a missile which Russia is on record as having retired from service in 2019. To back up this assertion, the Ukrainian government has noted that Tochka-U launchers were seen participating in joint military training exercises involving Russian and Belarus forces on Belarusian soil in February 2022, on the eve of Russia’s special military operation commencing against Ukraine.

This was according to Ambassador Evgeny Tsimbaliuk, the Permanent Representative of Ukraine to the International Organizations in Vienna, while addressing a special meeting of the OSCE Permanent Council about the attack.

The US backed up the Ukrainian allegation, with its Department of Defense announcing during a closed-door briefing to journalists that Russia had at first announced the missile strike against Kramatorsk, only to retract it once the announcement about civilian casualties was made.

The problem with both the Kiev and Washington claims is that neither is backed up by anything that remotely resembles solid evidence. The television images referred – to by the Ukrainians showed Belarusian Tochka-U launchers, not Russian ones, and the “claims” cited by the US referred to the private Telegram accounts of persons having no affiliation with the Russian government or military.

There is no question that both Russia and the US are sitting on de facto proof of where the Tochka missile was fired. The US has deployed in the region a variety of intelligence-collection platforms which would have detected the location of the missile at the time of launch, and would also have tracked the ballistic trajectory of the missile as it flew toward its target. Likewise, Russia has deployed numerous advanced surface-to-air missile defense systems, including the advanced S-400, which would have tracked the flight of the missile from launch to impact.

The fact that the US has not declassified this data to replicate a Cuban missile crisis-like moment at the UN to demonstrate to the world the scope and scale of a Russan lie strongly suggests that the Russians are not, in fact, lying. Moreover, Russia’s failure to do the same to reinforce its contention that Ukraine fired the missile points to the reality that any Russian radar is operating as part of an active military action zone, and as such Russia would be loath to publish data that could provide Ukraine with a tactical edge on the battlefield.

There is, however, one piece of evidence which proves without a doubt who owned the Tochka-U missile in question that was fired on Kramatorsk, the release of which would not compromise the security interests of the providing nation. Painted onto the booster of the missile, in black, is a unique serial number assigned to the Tochka-U at the time of production (in the Cyrillic alphabet, Ш91579, or Sh91579 in the Latin alphabet.) This serial number was assigned to it at the Votkinsk Machine Building Plant and represents the unique identifying mark for the missile that follows it through its military life cycle. 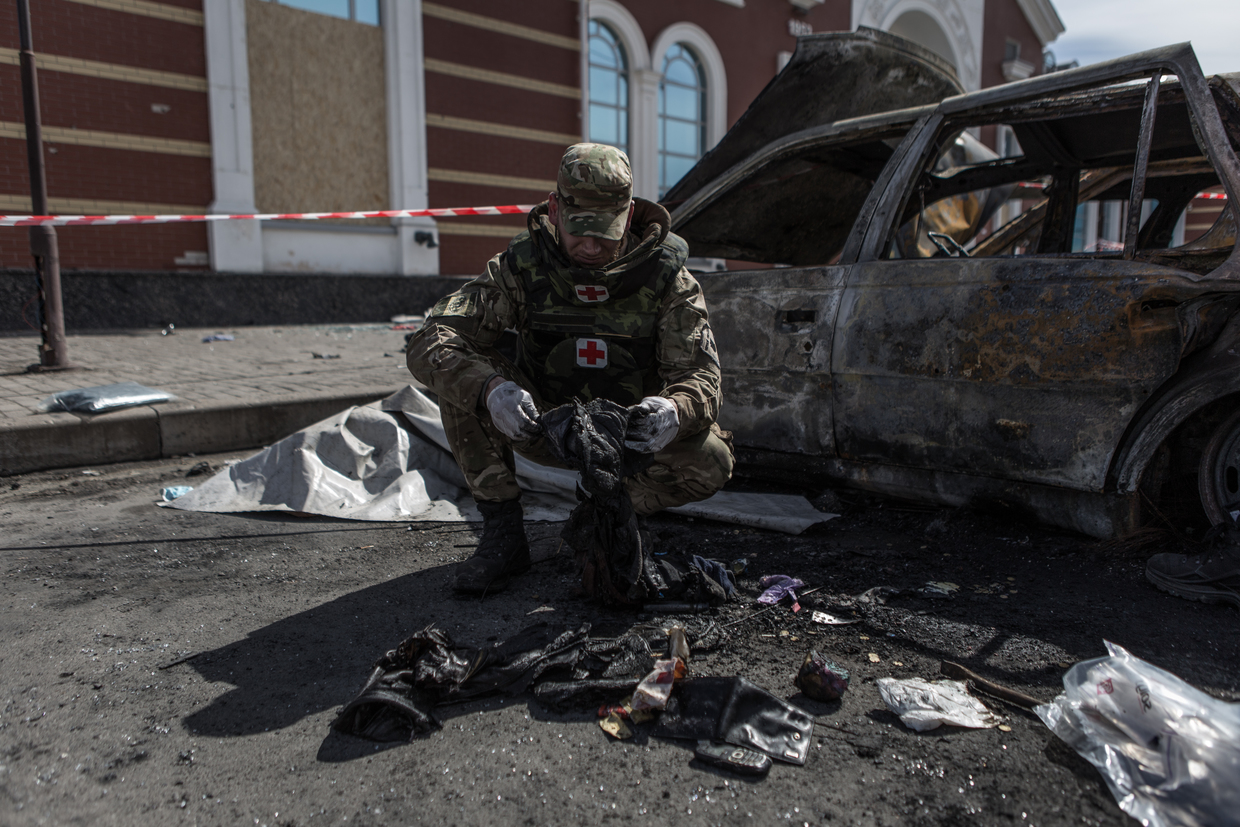 Some volunteers look for traces to help identify the corpses at Kramatorsk railway station after the missile attack in Kramatorsk, Ukraine on April 09 2022. © Getty Images / Andrea Carrubba

The use of the production serial number as a unique identifier has been used by the United Nations in Iraq as part of a series of intrusive forensic investigations into the accounting of Iraq’s SCUD missile inventory. The UN used these numbers to track the arrival of Soviet-made SCUD missiles into Iraq, and to account for their final disposition, whether it be through unilateral destruction at the hands of the Iraqis, during training, during maintenance, or during combat operations. The procedures used by the Iraqis for tracking and accounting for its SCUD missiles was derived from official Soviet procedures for the same, and therefore mirror those used by the Ukrainian government.

The serial number of the Tochka-U shows that it was produced in 1991, during the time of Soviet authority. At that time, when a Tochka-U was fully assembled at the Votkinsk Machine Building Plant, it belonged to the Ministry of Defense Industry. The missile would be shipped by rail from the Votkinsk Machine Building Plant to a receiving point, where the Soviet military would take possession of the missile and formally absorb it into its inventory. Each missile is accompanied by a document known as a “passport,” which records every transaction associated with the missile in question. The missile would either be assigned to an operational unit or to a storage unit – again, details that would be recorded in the missile passport.

Each missile had a life span of ten years, after which the manufacturer’s warranty, so to speak, was no longer valid. That meant that a missile produced in 1991 would, under normal circumstances, be retired by 2001. However, the Russian military has often extended the operational lifetime of missiles such as the Tochka-U by implementing inspection procedures designed to extend the lifecycle of the missile. Each such inspection would be recorded in the passport, as would all operational deployments or field exercises where the missile was subjected to handling and movement.

The Russian military should have in its archives documentation which lists the Tochka-U missiles officially turned over to Ukraine when the Soviet Union collapsed. Likewise, the Ukrainian military should have documents which record the missiles being absorbed into the Ukrainian armed forces. In either case, there exists undisputed records of ownership. Russia could end the discussion of who owned the missile in question simply by providing document-based evidence proving missile ownership (i.e., the transfer of ownership from the Soviet Union to Ukraine.) Likewise, Ukraine could do the same simply by providing a copy of the documentation surrounding its receipt of all Tochka-U missiles from Soviet authority, thereby enabling – if the Ukrainian version is to be believed – that it never possessed the missile in question. 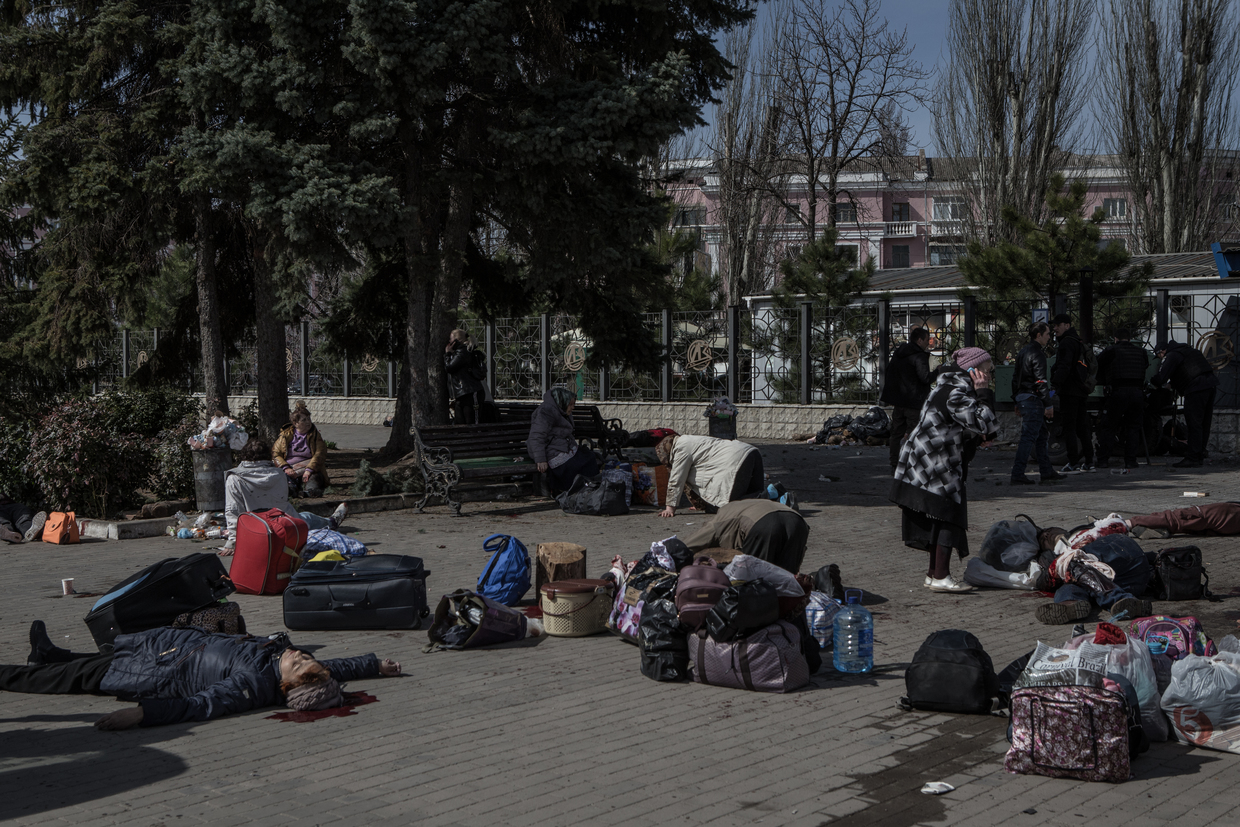 A view of the scene after over 30 people were killed and more than 100 injured in an attack on a railway station in Kramatorsk on April 8 2022. © Getty Images / Andrea Carrubba

Ukraine’s embattled President Volodymyr Zelensky has declared that the missile strike on Kramatorsk “must be one of the charges at the tribunal” he envisages at the International Criminal Court. “Like the massacre in Bucha, like many other Russian war crimes.”

Zelensky might want to be careful about what he wishes for. Any serious investigation into the Kramatorsk train station bombing will include an inquiry into the missile involved, and questions of ownership in which the missile serial number inscribed on the booster will play a leading role. If this is indeed the case – and the available evidence strongly suggests that it is – then it will be Zelensky and his leadership on the docket for the crime of slaughtering the very civilians whose lives he claims to be protecting.

Scott Ritter is a former US Marine Corps intelligence officer and author of ‘SCORPION KING: America’s Suicidal Embrace of Nuclear Weapons from FDR to Trump.’ He served in the Soviet Union as an inspector implementing the INF Treaty, in General Schwarzkopf’s staff during the Gulf War, and from 1991-1998 as a UN weapons inspector.