The U.N. Human Rights Council adopted a resolution Friday aimed at assisting the Marshall Islands in its efforts to secure justice for people suffering from the impact of the United States’ former nuclear testing program in its territory.

“We have suffered the cancer of the nuclear legacy for far too long and we need to find a way forward to a better future for our people,” Samuel Lanwi, deputy permanent representative of the Republic of the Marshall Islands in Geneva told the body in an emotional speech.

The United States conducted dozens of nuclear weapons tests in the islands of the Pacific state in the 1940s and ’50s, including the 1954 Castle Bravo test at Bikini Atoll, the biggest U.S. bomb ever detonated.

The text tabled by five Pacific Island states — the Marshall Islands, Fiji, Nauru, Samoa and Vanuatu — was backed by Australia and did not demand reparations.

A concrete dome on Runit Island containing huge amounts of deadly radioactive waste is of particular concern, especially in relation to rising sea levels as a result of climate change, according to the countries that drafted the resolution.

It called on the U.N. rights chief to submit a report in September 2024 on the challenges to the enjoyment of human rights by the Marshallese people stemming from the nuclear legacy.

The United States as well as other nuclear weapons states such as Britain, India and Pakistan expressed concern about some aspects of the text but did not ask for a vote on the motion. Japan did not speak at the meeting.

The Marshallese people are still struggling with the health and environmental consequences of the nuclear tests, including higher cancer rates. Many people displaced due to the tests are still unable to return home. 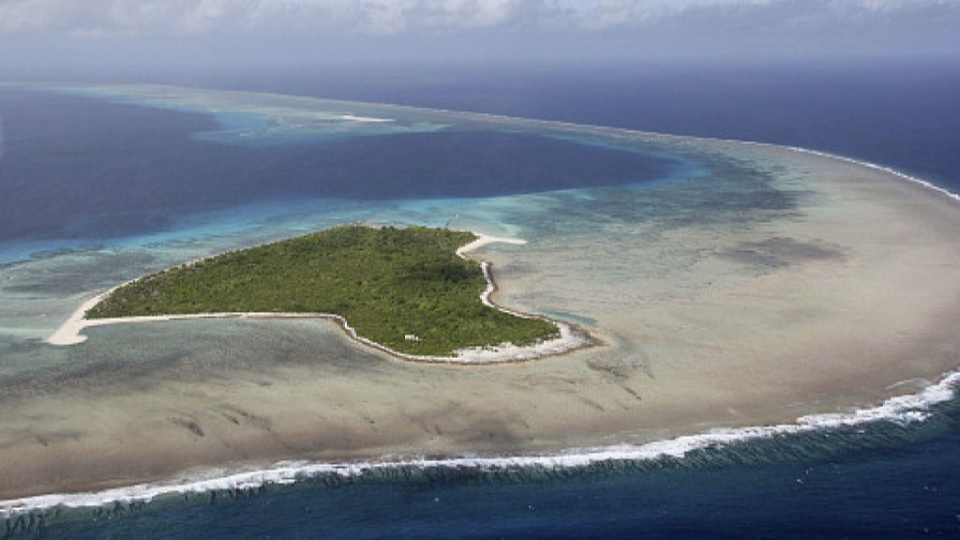 File photo taken in August 2011 shows the Bikini Atoll in the Marshall Islands in the Pacific Ocean. The dark-colored bay-like area (center, upper) is a crater created by a 1954 U.S. hydrogen bomb test. (Kyodo)

The Marshall Islands says a settlement reached in 1986 with the United States fell short of addressing the extensive environmental and health damage that resulted from the tests.

The U.S. government asserts the bilateral agreement settled “all claims, past, present and future,” including nuclear compensation.

Observers say nuclear states fear the initiative for the Marshall Islands could open the door to other countries bringing similar issues to the rights body.

by Noelle Talmon at https://www.ranker.com/list/runit-dome-nuclear-waste-storage-leaking/nicky-benson shared with thanks

The United States conducted dozens of nuclear tests in the Marshall Islands, which are part of the collection of islands that form Micronesia, between 1946 and 1958. For their part, locals were moved out of the area and were unable to return for over 30 years.

The majority of testing took place on Enewetak Atoll and Bikini Atoll, an area located between Hawaii and Australia. The islands were picked for several reasons: 1) their remote location, 2) their distance from large populations of people, and 3) their lack of proximity to shipping lanes.

During this time period, 67 nuclear and atmospheric bombs were tested. In 1958 alone, the Pacific Proving Grounds were subject to 35 nuclear tests. After testing was completed, there was a massive amount of radioactive waste left over. Environmental concerns and fears of nuclear contamination spurred the US government to try and clean up the Pacific location – sort of.

Maintaining the Enewetak Atoll cleanup has become pretty difficult, and this is really troubling because of the deterioration of something called the Runit Dome on Runit Island. The Runit Dome was built by the US Army inside a crater in order to contain the toxic waste. But, as ocean levels rise, there has been a growing concern over the Runit Dome leaking – the consequences of its failure, which would mean nuclear waste seepage, could be disastrous.

The US Initially Wanted To Dump The Radioactive Waste Into The Ocean.

After the US Defense Nuclear Agency (DNA) completed its nuclear testing in the area, the agency spent nearly 10 years trying to clean it up.

When Congress decided it didn’t want to pay to make the area habitable again, the agency considered its options. Their first choice was dumping the waste into the sea. However (thankfully), the agency was blocked by international accords and other regulations concerning hazardous waste. And nobody wanted to move the radioactive waste to the United States. What to do?

Instead, The US Dumped Plutonium-Contaminated Soil Into A 33-Feet-Deep Crater

Rather than dumping nuclear waste into the ocean, the US government thought filling a huge crater and building a dome over top of it might be the ticket. So, in the 1970s, the US government chose Runit Island to store 111,000 cubic yards of the radioactive debris leftover from nuclear testing.

The area contained an enormous crater, which resulted from a test that was performed in 1958, and they decided to dump the waste into it. The Army built a concrete dome topped by an 18-inch cap over the 33-feet-deep crater to prevent material from leaking into the ocean. Locals call it “The Tomb.” Inside, the Army placed soil contaminated by plutonium as well as nearly 437 bags of actual plutonium that were left over after one bomb didn’t fire correctly. The waste was sealed under 358 panels made of concrete.

The Army Also Dumped Radioactive Waste Into The Lagoon

The Army thought it was a good idea to conceal radioactive waste in the crater, but not all the debris was secured there. Some waste had less plutonium contamination, so the military used equipment to push it into the nearby lagoon instead.

The Environmental Protection Agency and locals living in Enewetak were not happy with this decision for obvious reasons. Despite their disapproval, the Army went ahead with its plan. The US government also allowed the radiation levels on the land to be much higher in the Marshall Islands than it would have permitted if nuclear testing had occurred on US soil

The OceanPhoto: United States Department of Defense / Wikimedia Commons / Public DomainA 2013 inspection revealed that the Runit dome is decaying. The groundwater is radioactive, and sand has penetrated the structure.

There are also several cracks on the dome, and vines are growing inside the crevices. If all this organic matter is penetrating the structure so easily, what of the radioactivity that it conceals?

Many experts fear a typhoon or large storm could be a major problem and cause nuclear waste from the dome to leak into the sea. In 1982, a National Research Council task force determined that a natural disaster would likely cause structural damage to the dome. However, the Department of Energy disagrees that dome deterioration would be a huge problem – and their reason is disturbing.

They wrote in a 2013 report: “Catastrophic failure of the concrete dome and instantaneous release of all its contents into the lagoon will not necessarily lead to any significant change in the radiation dose delivered to the local resident population.”Why not? Because the soil around the dome is already more contaminated than the waste inside the dome.

Eventually, the dome and the land around it could be underwater, or it will be destroyed by storms. Subsequently, radioactive material will leech into the ocean.

The Dome Was Supposed To Be A Temporary Fix 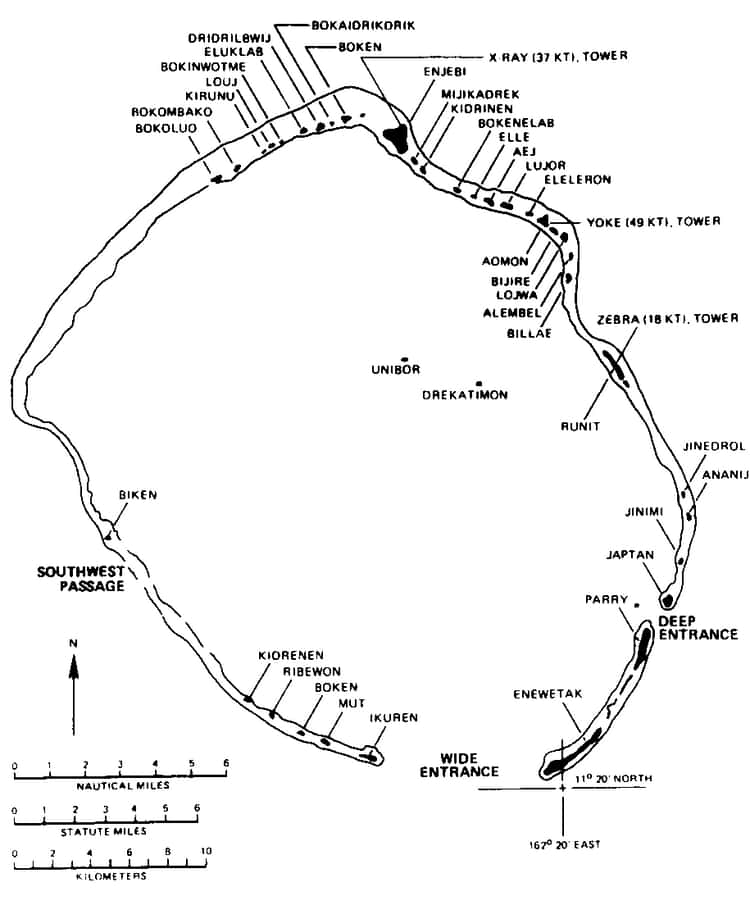 Photo: Unknown / Wikimedia Commons / Public DomainWhen the Army first built the dome (at a cost of $218 million), it was meant to be a temporary solution. The government intended on coming up with a long-lasting fix to contain the waste in the long term, but they never did. Unfortunately, the local population suffered. The people were finally allowed back in 1980 – after over 30 years away from their homeland. The Enewetak atoll had 40 islands, but only three were deemed safe for repopulation.

Over 30 years after the United States started using the Marshall Islands for testing nuclear weapons, the country finished cleaning up the area in 1980. The Enewetak locals were able to return home, even though much of the land could not grow food, and many places were unlivable.

The Nuclear Claims Tribunal was developed in 1998, and the group determined that the United States owed the people of Enewetak approximately $244 million in compensation for the havoc the toxic waste wreaked on their lives. The nuclear testing resulted in people losing their homes as well as their jobs. And because the area is so contaminated, they are unable to export fish and other products as per the US Department of Energy.

The locals live on a little bit of money they receive from a US trust fund, but many are barely able to support themselves. The US Department of Agriculture “helps” by sending the people the infamous canned meat known as Spam as well as other nonperishable items.

Despite food contributions by the United States, some locals are starving, while others have developed health conditions, such as diabetes.

The Dome Is ‘No Longer The Responsibility Of The United States’

In 1983, the US government essentially wiped its hands of the situation and said it was no longer responsible for the Runit dome.

From then on, the Runit dome was the burden of the Marshallese government. The United States claims it did everything it needed to do in order to fulfill its commitment to cleaning up the toxic waste.

But the Marshall Islands are a small country with very little money compared to the United States. The country does not have the capacity to effectively implement a solution that will rid the area of nuclear radiation.

Traces Of Plutonium Have Been Found In The South China Sea

While the Marshall Islands are dealing with the brunt of the aftermath of nuclear testing, other parts of the world are also feeling the effects of the Runit dome. In 2014, the Environmental Science and Technology journal noted that Guangdong province in the South China Sea contains traces of plutonium. This waste is directly linked to the Marshall Islands.

When the Runit dome finally deteriorates, more of its poison will empty into the sea and will likely cause negative consequences beyond its borders.

For inhabitants of the Marshall Islands, the Runit dome is just one of many threats they face as a result of the rising sea levels brought on by global climate change.

Floodwaters threaten to overtake the islands, and unemployment runs rampant. In 2016, eighth President of the Marshall Islands, Hilda Heine declared a state of emergency because of the situation there. And she says that many people simply can’t live there anymore.