Turkey is conducting intense air strikes on Kobani, Shehba, Shengal (Sinjar), Derik regions in Northeast Syria. Qandil and Asos regions in Northern Iraq are targets of the bombings as well.

Last night & this morning, Turkey conducted a series of aerial attacks across NES. So far, 11 civilians have reportedly been killed (1 journalist) and 6 injured (2 journalists). The attacks occurred across US- and Russian-controlled airspace; both likely gave the green light. 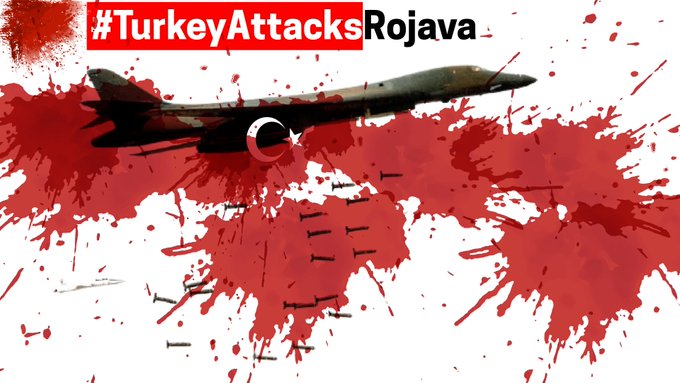 Turkish army warplanes launched airstrikes on many settlements in the Autonomous Administration of North and East Syria (AANES) and the Kurdistan Region of Iraq (KRI).

The head of the Syrian Democratic Forces (SDF) media centre Farhad Shami announced Turkey’s air strikes on Twitter, saying “Kobane, the city that defeated ISIS, is subjected to bombardment by the aircraft of the Turkish occupation.”

Comment: Turkey needed Russian and US permission to illegally bomb NE Syrian airspace. Yet there is no report of the attacks on Russian RT English News. As for the US they merely warned their citizens 48 hrs before. Turkish’s jets fly from the nearby NATO Incirlik base…. Big fear is if a new ground invasion will begin… go figure!

The Democratic Kurdistan Community Congress in Europe (KCDK-E) Co-Chairs called on people in Europe to come out to the streets to protest Turkey’s attacks on North East Syria.

The airstrikes targeted Kobani, Shehba, Gire Spi, Derik, Shengal (Sinjar), and Karaçox. Qandil and Asos regions in Northern Iraq are targets of the bombings as well.

SDF General Commander Mazloum Abdî stated on Twitter that Turkish bombings threatened the whole region and were not in favour of any party.

Turkish bombing of our safe areas threatens the whole region. This bombing is not in favor of any party. We are making every effort to avoid a major catastrophe. If war erupts, all will be affected. (1Mazloum Abdî مظلوم عبدي @MazloumAbdi

Abdî said: “We are making every effort to avoid a major catastrophe. If war erupts, all will be affected,” and called the people of AANES to stay in their homes and abide by the directives of the Security Forces.

It was also announced that the villages of Sheikh Isa and al-Beilonia in Shehba region, Kale Swarge in Afrin’s Shera district, as well as Dahir al-Arab village in the Zergan district of Hasakah were bombed and there were several deaths and injuries.

The Turkish Ministry of National Defense confirmed the air strikes in a tweet and said that “the treacherous attacks are being held to account”.

Turkish Foreign Minister Mevlüt Çavuşoğlu had said on Friday that the Turkish Armed Forces will continue its operations in Syria and Iraq.

After Çavuşoğlu’s statement, the U.S. Consulate General in Erbil (Hewler) in KRI issued a security alert warning its citizens not to travel to regions in northern Syria and Iraq on Friday. @TravelGovIraq: We are monitoring credible open-source reports of potential Turkish military action in northern Syria and northern Iraq in the coming days. We continue to strongly advise U.S. citizens to avoid these areas.

The intense air strikes came a week after the 13 November bombing in Istanbul, which killed six people and injured dozens.

Turkey stated that the Kurdistan Workers’ Party (PKK), the Democratic Union Party (PYD) and the People’s Protection Units (YPG) organised the Istanbul bombing, however, the accused Kurdish groups condemned the attack targeting civilians and declared that they had no connection with the bombing.

After Turkey claimed that the AANES and its military wing SDF were connected with the bomber, the Department of Foreign Relations of the AANES also announced that it had no connection with the bomb attack and invited international forces to be involved in the investigation.

Saleh Muslim, the co-chair of the PYD said that Turkey’s bombing Kobani was an act of revenge for defeating ISIS.

The contradictions in the statements made by the Turkish authorities regarding the attack continue to be discussed by the Turkish public. Analysts and some opposition politicians argue that this attack was a conspiracy to legitimise Turkey’s military operations in Syria and to create pre-election fear in the public.