December 11, 2022 From Daily Climate: and Activist Post By B.N. Frank via thefreeonline

One year after our “Fractured” investigation on fracking: Lots of talk, no action

Forever Chemicals (PFAS) are a highly useful water repellant widely included in the secret toxic chemical mixtures added to billions of gallons of water pumped into the ‘fracking miracle’ wells, with zero oversight and exemption from the Clean Water Laws, by the notorious ‘Cowboy Frackers’ who have then abandoned 3.2 million orphaned and abandoned wells (2021) and toxic ponds, often declaring bankruptcy to drill again with a new name, and thus pumping in ever more Forever Chemicals, that can be lethal to humans at one part per trillion. All this beneath US flags and claims to Make America Great Again, selling frack gas as LNG at astronomical prices to desperate nations deprived by the Pentagon’s wars, sanctions, cuts of Russian Gas and sabotage of Nordstream..…

Earlier this month a fracking company agreed to a plea deal in Pennsylvania after a grand jury investigation revealed that its gas wells were malfunctioning “resulting in flammable methane leaking into aquifers in Dimock and the surrounding area.”  Of course, fracking has led to complaints in other U.S. locations as well.

“In the Energy Policy Act of 2005, Congress revised the Safe Drinking Water Act (SDWA) to exclude “the underground injection of fluids or propping agents (other than diesel fuels) pursuant to hydraulic fracturing operations related to oil, gas, or geothermal production activities” from the Safe Drinking Water Act’s requirements for the underground injection control (UIC) program”. ballotpedia.org

Kristina Marusic PITTSBURGH — Waste from fracking wells that used PFAS – commonly known as “forever chemicals”– has been dumped at dozens of sites across Pennsylvania, Ohio and West Virginia — all of which could face contamination of soil, groundwater and drinking water as a result.

PFAS (per- and polyfluoroalkyl substances) have been used in hydraulic fracturing and other types of oil and gas wells across the U.S. for at least a decade.

Exposure to the chemicals, which are also used to make various consumer products nonstick and waterproof, is linked to health problems including kidney and testicular cancer, liver and thyroid problems, reproductive problems, lowered vaccine efficacy in children and increased risk of birth defects, among others.

Regulatory loopholes and a lack of transparency make it impossible to know how extensively the chemicals have been used in oil and gas production. 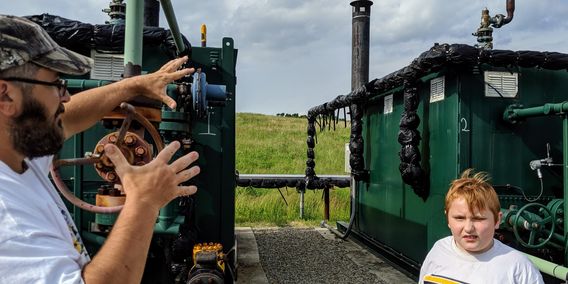 PFAS: The latest toxic concern for those near fracking

In August, however, Environmental Health News (EHN), documented the first case of private drinking water contaminated with PFAS potentially linked to fracking wells, and in October EHN mapped the eight locations where operators have publicly disclosed the kind of PFAS they used in Pennsylvania fracking wells.

Now, a new map developed for EHN by FracTracker using public data reveals that waste generated at the eight Pennsylvania fracking wells with documented PFAS use has traveled to at least 97 additional sites for reuse and disposal.

“It’s unique that we’re able to trace this in Pennsylvania,” Matt Kelso, a manager of data & technology at FracTracker, who developed the map, told EHN. “Other states may tell you a little about the waste generated at well pads, but most don’t publicly report where it goes.”

Experts say many of these secondary disposal sites are also likely to be contaminated by PTFE (Polytetrafluoroethylene), commonly known as Teflon, which is one of more than 9,000 PFAS, and was reported as being used at all eight wells.

PFAS like PTFE (Teflon) are extremely water-repellent and are sometimes used in fracking fluid to make the chemical mixture more stable and to more efficiently flush oil and gas out of the ground at high pressure. There’s also evidence that the chemicals are used during initial drilling and other phases of oil and gas extraction, but companies aren’t required to disclose them, so there’s no way of knowing how widespread the practice is.

“If there were PFAS in any of those waste products, it’s likely that it would have gotten into the environment in some of those locations,” Robert Delaney, a retired geologist and Superfund specialist who spent 30 years working for the Michigan Department of Environmental Quality (now called the Michigan Department of Environment, Great Lakes, and Energy), told EHN. Delaney was among the first to raise the alarm about widespread PFAS contamination in Michigan and spent more than a decade providing technical guidance to state and national groups addressing PFAS contamination.

Chemicals linked to birth defects are being dumped in Pittsburgh’s rivers: Report

“The odds are that just as there were spills at the well pads, there have been spills and leaks at these disposal sites,” Delaney said. “All these places that accepted the waste didn’t know that they were dealing with PFAS. And the things you do to treat other chemicals doesn’t work on them…these chemicals never go away.”

In October, EHN asked the Pennsylvania Department of Environmental Protection (PA DEP) whether the agency would test soil or groundwater for PTFE at the eight wells where public disclosures show the chemical has been used.

In its initial response, the agency stated that “absent a spill or release on the surface or below surface, there is no reason to conclude that wellsite fluids (whether including PFAS compounds or not) would have reached nearby soils or drinking water.”

EHN pointed the department toward documentation of two spills on one of the eight well pads, the Paul Schlinksi 8H well in Donegal Township, Pennsylvania. The first one, in 2017, and another in 2020 — then asked whether soil or groundwater testing would be performed at that site.

For the first time, natural gas production linked to lower birth weights in a national study

“Given the time period between the use of the PFAS chemicals and the releases, the small amount of the spills, that the spills were contained to the gravel of the well pad, and that they were remediated quickly, DEP does not have current plans to sample for PFAS at this location,” Pennsylvania Department of Environmental Protection spokesperson Jamar Thrasher told EHN.

‘CRIMINAL FRACKERS.. The methane releases from the US Gas and Oil industries causes more Climate Damage than the rest of the world combined’. ballotpedia.org In 2019, researchers showed that a natural gas well blow-out in Ohioreleased more methane than the entire oil and gas industry of a majoir producer like Norway.The US Oil and Gas Methane Problem– US Frackers faced ZERO methane regulation until Obama introduced a voluntary law which was repealed on Trump’s election.

He added that both spills consisted of “produced water,” which mainly consists of brine from underground formations, and that they wouldn’t expect to find chemicals used in fracking fluid in produced water so long after the initial fracking phase, which happened in 2012.

Delaney thinks Pennsylvania regulators should at least test soil and water for PTFE at the eight well pads where the chemical was used, and also consider testing at the sites where waste from those wells has been disposed of.

“They should want to find out if PFAS is a problem in the well drilling business in their state,” he said. “That’s a big business and it could impact a lot of aquifers. Since they know these chemicals have been used, following the precautionary thing to do would be to go out and check these areas to see if PFAS [are] getting into the environment this way.”

Profit outside the rigged system! Protect yourself from tyranny and economic collapse. Learn to live free and spread peace!

Residents who live near the eight well pads where Teflon was used, or any of the sites where waste from those wells was disposed, can file a complaint with the Pennsylvania Department of Environmental Protection to request testing of soil and groundwater for PTFE.

PFAS lawsuits on the horizon

EHN published an investigation in August that documented PFAS contamination in drinking water at the home of Bryan Latkanich, a Pennsylvania resident who formerly had two fracking wells on his property.

PFAS: The latest toxic concern for those near fracking

Latkanich has since filed a lawsuit against two fracking companies for allegedly contaminating his drinking water with PFAS and other toxic chemicals. Latkanich and his son have experienced a slew of health problems since the wells went in more than a decade ago, including stomach problems, asthma attacks, rashes and eye irritation for both of them; and for Bryan, repeated hospitalization for kidney issues.

The Pennsylvania Department of Environmental Protection tested his water repeatedly through the years, but never looked for PFAS, and concluded that the fracking wells weren’t to blame for any contamination. The agency also conducted statewide PFAS sampling at locations it determined were likely contaminated in 2019, but didn’t include any oil and gas well sites — despite knowing the chemicals had been used at them.

“DEP [the department] isn’t looking for PFAS when they do these water tests because they don’t want to find them,” Latkanich told EHN.

Delaney said it’s not uncommon for regulatory agencies to resist looking for PFAS.

Several states, including New Jersey and California, along with cities or municipalities Massachusetts, Florida and South Dakota, are suing PFAS manufacturers like DuPont to recoup the costs of cleaning up drinking water contaminated by the chemicals.

There are currently no such lawsuits in Pennsylvania. State regulators are working to establish standards for two of the most common PFAS in public drinking water, but those regulations won’t help people like Latkanich, who has a private water well — as do many residents in the rural parts of the state where fracking occurs. In the absence of meaningful regulations, lawsuits may be the only recourse for people like Latkanich.

Thrasher said the state’s Department of Environmental Protection is incorporating PFAS handling protocol into programs that address releases and spills at oil and gas wells, and said the agency will “raise issues relating to PFAS with industry as those developments occur.”

This summer, Colorado became the first state to ban the use of PFAS by the oil and gas industry. There’s been no move toward a similar ban in Pennsylvania.

“People need to be more aware of what their government is doing and not doing to protect them from these industrial chemicals,” Delany said. “We still haven’t stopped producing or using PFAS even though we know they’re impacting humans adversely. This is a problem our children and grandchildren will continue to face in the future.”