Pictured ..press clipping from the time and some of the editions we have, and a PDF of a later edition (1984) produced by Sheffield Anarchists… PDF below last picture..enjoy… 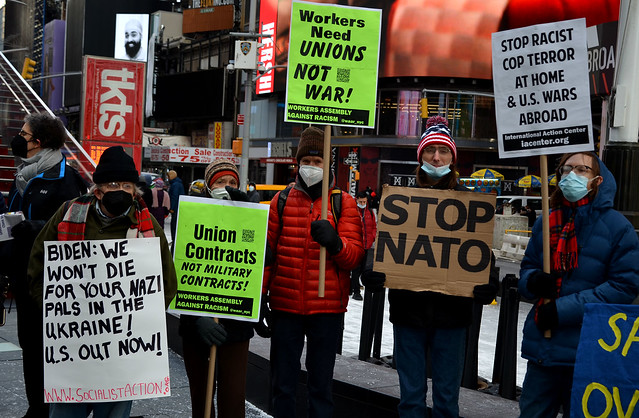 In this week’s show, Prof. Wolff explains why capitalism does not deserve credit for improved living conditions, Home Depot billionaire blames US capitalism’s problems on US workers being “lazy, fat, and stupid,” Southwest Airlines as example of failures by both corporations and their gov’t “regulators,” George Santos as creature of capitalist advertising.

The notorious tanks are only a small part of all the military supplies that are continuously moving to Ukraine; but they became an important political reason for NATO to demonstrate its alleged cohesion and generosity.

In Russia, they responded to the upcoming arrival of German and American tanks on the Donbass front lines with their own media campaign.

Many public and private figures announced generous rewards for captured and destroyed tanks.

On January 29, a famous Russian actor, on behalf of “some representatives of a large Russian business”, announced a prize of 10 million rubles for each Abrams destroyed.

A couple of days ago, the Russian company FORES announced a reward of 5 million rubles for the first destroyed or captured American M1 Abrams or German Leopard 2.

These are just some of the announced prizes. The hunt begins, and the stakes are rising.

from thefreeonline by thecollective at anarchistnews.org

Clashes and demonstration in Trastevere in solidarity with Alfredo Cospito on 101st day of hunger strike (Rome, Italy 28th January 2023)

From Act for freedom now!

We are publishing a short contribution on the demonstration held Saturday 28th January in Rome in solidarity with comrade Alfredo Cospito 101 days from the beginning of the hunger strike.

Near the gathering in piazza Trilussa – which lasted several hours and from which a demonstration had been unable to set off – after some of those present had slipped out of the encirclement, there were some clashes with the repressive forces, they soon found themselves in difficulty due to being partially surrounded and to the determination of comrades to hold the streets (but they managed to stop a comrade near Piazza Trilussa).

After the clashes, a demonstration was held in the small streets of Trastevere.

At the end of the demo a few dozen comrades were stopped by the DIGOS, police in riot gear and carabinieri.

All 41 people apprehended during the day, taken to the police station and released without restriction from the early hours of Sunday 29, were charged with Article 337 of the Criminal Code (resisting a public official). Below is a brief informative note issued on 29 January itself.

In these days when the comrade’s health condition is rapidly and dramatically worsening, with this initiative the comrades present affirmed the importance of a presence and consequent conflictual practice to be held in the streets, in solidarity with Alfredo in support of the hunger strike. We continue the struggle with rage and determination Alfredo out from 41 bis!

Yesterday in Rome struggle in the streets against 41 bis and life imprisonment without parole, with Alfredo Cospito 101 days on hunger strike.

The police wanted to surround the demonstrators, they were surrounded. The riot police in total confusion charged the DIGOS twice, managing to send one of them to hospital.

The boss of the square wanted to prevent a harmless demo, he got two hours of wild demonstration in Trastevere, which resisted by barricading itself and repelling numerous charges in the alleys.

While it is true that most of the 41 arrested could have been avoided if it had been realised a few minutes earlier that the party was coming to an end, this does not detract one iota from the message of anger at the imminent execution of our comrade coming from the streets. If anything, it reinforces it.

A big thank you to all the rebels and solidarity with all those accused.

Alfredo Cospito (born 1967) is an Italian insurrectionary anarchist convicted on terrorism charges. [1] He was sentenced to 10 years for kneecapping the head of the Italian nuclear power company Ansaldo Nucleare in 2012, and subsequently to life without parole for bombing a Carabinieri cadet barracks in Fossano………

MILAN, Italy. January 30th, 2023. High-ranking officials of both NATO and the Russian Federation have now admitted the two entities are at war, the former saying it outright, the latter saying NATO countries with supply lines of weapons to Kyiv could be “legitimate military targets”.

“The idea that we’re going to send in offensive equipment and have planes and tanks and trains going in with American pilots and American crews – just understand, don’t kid yourself, no matter what y’all say, that’s called World War III,” said President Joe Biden in March of 2022.

From thefreeonline on 1st Feb 29023 By Didi Rankovic at reclaimthenet)..

If you’re tired of censorship, cancel culture, and the erosion of privacy and civil liberties subscribe to Reclaim The Net.

The annual World Economic Forum (WEF) gathering has always been a testing ground for some bizarre ideas, which nonetheless serve a purpose: to introduce, and if possible normalize all kinds of mass surveillance and sometimes extremely privacy-invasive technologies.

And monitoring people’s brain activity, including via implants – surely, it doesn’t get much more invasive than that.

“employers intervening to get your mind back on track.”

Yet this was one of the technologies presented at an event in Davos this year by Duke University Professor Nita Farahany.

Brain implants are not new in and of themselves, as are used in medicine to treat some serious conditions. However, the kind brought up here at one point are the ones to be put into healthy people – basically to read their minds.

END_OF_DOCUMENT_TOKEN_TO_BE_REPLACED

from thefreeonline on 31st jan 2023 info from Turkish Minute /stockholmcf.org/

Turkish prosecutors are seeking a prison sentence of over two years for famous singer Melek Mosso on charges of insulting a former ritghtwing soldier, Musa Orhan, convicted of raping an 18-year-old who was driven to suicide

Singer Melek Mosso.. facing 2.5 years jail due to a freed convicted nazi rapist prosecuting her for a tweet criticising him.

It all began in late 2021 when a Turkish court handed down a suspended sentence of 10 years to former non-commissioned officer Musa Orhan on conviction of sexual assault, raping an 18-year-old Kurdish woman, İpek Er, who later died by suicide.

Melek Mosso was a supporter of Esgi Mola, in a show trial where she was previously convicted of slandering the rapist. In October 2021 an Ankara court had convicted Ezgi Mola of insulting the freed rapist and ordered her to pay a fine of TL 5,200 ($276). New Charges of supporting Egzi and insulting the rapist were then brought against 22 more women including Melek Mosso and 8 celebrities

Orhan proudly gives the salute of the Turkish Nazis.- the Erdogan supporter got a suspended sentence for rape, kidnap and torture and continues prosecuting women for complaining about his impunity.

Since the sentence was suspended, Orhan wasn’t arrested but was rather placed under judicial supervision, in a decision condemned by human rights activists.

Many women’s associations in Turkey also criticized the decision, saying the judicial system was “protecting a rapist” by allowing him to walk free.

In the social media post Mosso said, “Shame on this system that protects rapists,” using the hashtag #EzgiMolayalnızdeğildir (Ezgi Mola isn’t alone), referring to a popular Turkish actress who was convicted of insult charges after she protested the release of Orhan in a tweet in August 2020.

”Reminding the public that sergeant Musa Orhan abducted and raped İpek Er for 20 days and drove her into suicide in Batman province. Social media users have also denounced the fact that Musa Orhan is again free and criticized the policy of impunity in the country”.. Jin News.

The ordeal of Ipek Er, a 19 year old Kurdish woman who finally died in a hospital on August 18, 2020, 33 days after she ‘tried to take her own life’, was discovered in a letter she wrote and publicised on July 16, 2020, before her death, desccribed as suicide.

She said in the letter that she was abducted and raped by Orhan for 20 days in the southeastern city of Batman. Forensic tests later proved she was indeed repeatedly raped by Orhan.

Her rapist is a supporter of the Grey Wolves, the militant wing of the Nationalist Movement Party (MHP), an ally of President Recep Tayyip Erdoğan’s ruling Justice and Development Party (AKP), and whose ideology is mainly based on Turkish ultra nationalist racism, and leads persecution of refugees and minorities, especially Kurds like Ipek Er.

“Drown in your conscience that let you release this rapist low-life vicious bastard. Now you have deprived us of everything- law, prayer, wishes, petitions, hope!! What can I say! Shame on you ! Shame on you !!!” Esgi Mola had said in the offending tweet, referring to Orhan, who was released pending trial after six days behind bars by a Siirt court on August 26, 2020, despite a forensics report confirming that he raped İpek Er, and was later given a suspended sentence

END_OF_DOCUMENT_TOKEN_TO_BE_REPLACED

This One Comic Perfectly Shuts Down Deniers of Global Warming

Misleading posts about climate change have flourished on Twitter since Elon Musk took charge of the company in October, according to a new report.

“What’s happening in the information ecosystem poses a direct threat to action,” Jennie King, head of climate disinformation at the Institute for Strategic Dialogue, which produced the report, told the Associated Press. “It plants those seeds of doubt and makes people think maybe there isn’t scientific consensus.”

The report finds that Twitter is actively recommending the term “climate scam” to users who searched for “climate” during the UN climate talks in November. The report found that “climate scam” often appeared as the top result in searches, despite greater user engagement with other terms relating to climate change.

The report says that it’s unclear why “climate scam” gained more prominence than these other terms, adding that the trend highlights “the need for transparency on how and why platforms surface content to users.” More likely it’s down to Twitter Management Tools.