Brazil Could Return to a Dictatorship.   Glenn Greenwald on Possible Election of Far-Right Demagogue

AMY GOODMAN: This is Democracy Now! I’m Amy Goodman. Voters in Brazil head to the polls Sunday in an election that could reshape the political landscape of South America. Polls show the current front-runner is the far-right Jair Bolsonaro, a former Army officer who has openly praised Brazil’s military dictatorship, which lasted from 1964 to 1985.

Exit polls should be broadcast at 7 p.m. local time and results will start flowing shortly after that because Brazil uses an electronic voting system.

Bolsonaro has a long history of making racist, misogynistic, homophobic comments. He has encouraged police to kill suspected drug dealers. Most polls show Bolsonaro winning on Sunday but failing to win enough votes to avoid a runoff election on October 28th. He has risen to the polls since September 8th, when he was stabbed while campaigning. 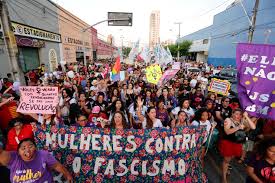 Bolsonaro also directly benefited from the jailing of former President Luiz Inácio Lula da Silva in April, who had been leading all presidential polls. Lula remains in jail on what many consider trumped-up corruption charges to prevent him from becoming president. Lula, the head of the Workers’ Party, was then forced to drop out of the race. Lula’s handpicked successor, Fernando Haddad, is currently placing second in most polls.

On Saturday, tens of thousands took part in women-led rallies in Rio de Janeiro, São Paulo and other cities to protest Bolsonaro. The theme of the protests, “Not Him.” END_OF_DOCUMENT_TOKEN_TO_BE_REPLACED