Update on Villa Amalia: 10,000 demonstrate in Athens in support of 92 arrested anarchists; statement issued from inside prisona DarkerNet:

Nothing less than our non-negotiable position for social spaces that we support and they support us in return. Nothing other than what we say and what we do all these years in squats, in self-organised spaces, in demonstrations, at strikes and in the streets. For this reason, the authorities that placed armed guards outside Villa Amalias could never cause us to be disappointed, to break our morale, to make us stop, to give up. On January 9th, we re-occupied the building of Villa Amalias under the nose of the repressive forces that were guarding it. A building linked with the history of the subversive movement for the past 22 years, but also with the ideals that it signifies for us.

read out texts. At the same time, hundreds of people in solidarity gathered around the squat. Two hours later, and without the presence of an attorney, forces of EKAM [police’s anti-terrorist unit – the SWAT equivalent] , backed by all sorts of police units, plus a helicopter, raided the squat, arresting us.

Soon thereafter, comrades occupied the HQ of the governmental party Democratic Left (DIMAR), highlighting the complete alignment of this party with the choices of [PM] Samaras and [Minister of Public Order] Dendias. After a police intervention, all 40 comrades were detained.

The state, in its attempt to halt the solidarity actions that unfolded, chose to raid yet another social space, the squat of Patision 61 and Skaramanga, arresting yet more 8 comrades of ours.

We re-occupied the guarded Villa Amalias, knowing that we will be attacked and obviously that we would be arrested. We will do it again, as many times as it takes, for this and for any other social space of resistance of those from below that might come under attack. We say it once again, tirelessly: neither their weapons, nor their slandering can scare us.

With today’s reoccupation we showed how the full-scale attack of the state, which today targets squats, self-organised spaces and the structures of the anarchist/anti-authoritarian movement, as well as social-class struggles, is not without an alternative. Heart, the will for struggle and the desire for a world of equality and freedom are proving to be stronger than their armies.

They shall never manage to beat us, because no matter how many forces of 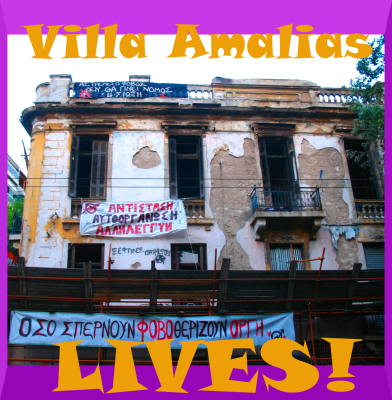 repression they enlist, they cannot choke resistance, dignity and solidarity. They shall never manage to beat us, because we are not one hundred, we are thousands. We are part of the world that struggles against capitalist barbarity, state terrorism and the fascist turn. Part of local and migrant workers, unemployed, students, those resisting in the neighbourhoods, persecuted and arrested people in struggle, who do not bow their heads. Along with them, we raise a fist of resistance just like at the moment of our arrest.

Our own weapon is solidarity, which we felt very strongly today. Our strength is collective resistance.

At the time of the memoranda, enforced and ever-increasing impoverishment of society are the future dictated by the state and capitalism; at this time, when the violence of the system is intensified and the state of permanent exception installs totalitarianism, social revolution is the only way forward. Amidst this condition we are consciously standing firm, motioning self-organisation, resistance and solidarity – and attempting to take that extra step forward… to organise social and class counter-attack. At the time when the dominant condition reads “we are going to lose everything”, we struggle for its inversion: “let’s win everything”! If we don’t change things, no-one will. Everything continues…Against the hurricane of repression, let’s pit the storm of solidarity! Everyone to the streets, where

everything is determined. Hands off Villa Amalias, Skaramanga squat, the self-organised haunt of ASOEE, the Xanadu haunt, Delta occupation, all squats, self-organised spaces and social struggles.

The 93 arrested of Villa Amalias