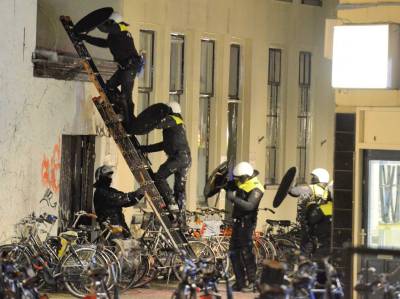 Netherlands: A report on the eviction of Ubica squat

Suddenly they came storming out. They were ten or fifteen. Black clothes, hooded. They had a fire extinguisher, a ladder, paint and some tires with them. And gasoline. The great final act of the sad drama of the Fall of Ubica had started. END_OF_DOCUMENT_TOKEN_TO_BE_REPLACED 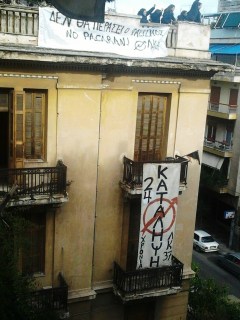 RESISTANCE against the plutofascist state in Greece continues in the face of continuous attacks by the authorities.

An attempt to crush Greece’s oldest anarchist squat, Lelas Karagianni 37, was defeated on Tuesday January 15 when it was reoccupied later the same day.

Supporters and neighbours gathered at Amerikis square and then outside the squat, trying to prevent the eviction.

There were several comrades chanting slogans on the rooftop of the building that were caught by the police. Also, two supporters were beaten by cops on the street and detained as well. Heavy repressive forces were deployed downtown, plus a police helicopter.

Soon thereafter, more people were assembled near the squat. A gathering was called for 15.00 outside the police headquarters on Alexandras Avenue, in solidarity with the 14 squatters who were arrested from inside Lelas Karagianni, and a discussion was announced for 19.00 in the Athens Polytechnic (entrance from Stournari street).
Reports Contra Info: “All of the arrested comrades were released at about 17.00 and Lelas
Kariagianni squat was reoccupied!” END_OF_DOCUMENT_TOKEN_TO_BE_REPLACED

Update on Villa Amalia: 10,000 demonstrate in Athens in support of 92 arrested anarchists; statement issued from inside prisona DarkerNet:

10,000 people demonstrated in Athens in solidarity with the 92 people arrested on Wednesday after the re-eviction of the Villa Amalias anarchist centre. The demonstration started from Propylaea of Athens University and marched via Patision Avenue to the courthouse of Evelpidon, where those arrested are being held in custody. The first 10 were released on bail. More demonstrations in solidarity with those arrested took place in Thessaloniki, Chania, Mitilini, Patra, Heracleon and other cities. Below is a statement, translated into English, from those arrested still in prison. .. END_OF_DOCUMENT_TOKEN_TO_BE_REPLACED

Eight people were detained inside the building, while the police are now searching in the presence of an ninth person who was also in the building at the time of the raid and who is acting as witness to the search. It is expected that this person will also be detained at the end of the operation.

It is still unclear whether or not the police intend to evict the squat.