From Enlace Zapatista  Translation submitted to It’s Going Down

The modification enacted by the Superior Court of “Justice” on the sentence of our compañero Luis Fernando Sotelo is a joke. The reduction of the sentence to 13 years [from 33 years], is not to serve justice, but is a mockery of it. The irregularities in the process have been denounced innumerable times. Evidence doesn’t exist to incriminate him and during the trial the only eyewitness, the driver of the metro-bus, said he did not recognize our compañero.

Why is he still in prison? It is not for judicial reasons, but political ones. It is punishment for social protest. They want to keep him imprisoned as an example. Our compañero is detained under the command of the government of Mexico City, lead by Miguel Ángel Mancera. Or perhaps also the rumors of corruption of the Fourth Chamber of the Superior Criminal Court are more correct?

We see where the people who struggle are and we see where the solidarity in the struggle of the 43 disappeared of Ayotzinapa is repressed. We also see where the criminals are and we point to them for the unjust incarceration of Luis Fernando: Enrique Sánchez Saldoval, Judge of the Fourth Chamber of the Criminal Court, Edgar Elías Azar, President of the Mexico City Superior Court of Justice, and Miguel Ángel Mancera, head of the bad government of the city.

As the anniversary of the ‘disappearance’ of teachers  approached, the State jailed our compañero Luis for 33 years for ‘damaging property’ at the Third Global Day for Ayotzinapa Protest, two years ago.

Accused of burning a bus Luis has been victimised and demonised in yet another atrocity by the ”terrorist” State. This is not exaggeration, the State really has condoned mass murders and disappearances and everyday torture of prisoners and opponents, as verified by UN and Human Rights reports.

In fact the original Ayotzinapa ‘disappearance’ of progressive socialist teachers was just the culmination of a State-condoned terrorist campaign against them.

Everyone has always known who is  responsible, the ‘deep state’, the oligarchy of white rulers and landowners, allied with the drug mafia, with their money in Miami, and  backed as always by the USA, are continuing their immoral nazi tactics.

The great majority of workers and indigenous, practicing solidarity and horizontal culture, are treated as slaves who have ‘unfortunately been partly freed’, for the moment.

This is nothing new, you can trace this all the way back to the degenerate looting Spanish ruling class and the horrors of Inquisition and witch burning.

This is a similar arrogant, ignorant, butchering Oligarchy to that of the Argentine dictators, the Bolivian Terror, the Colombian 40 years war, the Venezuelan tragedy, the Guatemalan genocide (etc!) and now the takeover and looting of Brazil by a minority far right landowners conspiracy.

We live in the age of the global village..let’s show these bastards they can’t just repress, cover up and censor forever, like they did with the massacre of 300 students in 1968. It’s about time to stop business as usual with this regime..

Luis Fernando was arrested on November the 5th 2014, the date chosen by Anonymous for mass yearly protest under the banner ‘We do not forgive.. We do not Forget.. Expect Us’..

September 21, 2016
From Anarchist Black Cross – Mexico
Translated by Scott Campbell  On Tuesday, September 20, after one year and nine months of proceedings, our compañero Luis Fernando Sotelo Zambrano was given a sentence of 33 years and five months in prison and a fine of 519,815.25 pesos, for the crimes of attacks on public thoroughfares, first-degree attacks on public order, and first-degree destruction of private property.

This sentence is in line with the Mexican state’s policies of repression and criminalization, starting with Mexico City Mayor Miguel Ángel Mancera, who sought to condemn our compañero without any evidence and to place a ridiculous and disproportionate sentence on him.

In the face of their policies of terror, we state that we are not afraid, that their sentences will collapse, because we have reason and organization on our side.

Today we renew and strengthen the solidarity with our compañero, may he know that he is not alone, we will walk and struggle together until the walls of their prisons fall, we will fight tirelessly until we are all free!

Let our rage become one, let the wind blow, let the storm begin!

Luis Fernando Sotelo Zambrano was arrested alongside Sergio Pérez Landero on November 5, 2014, near 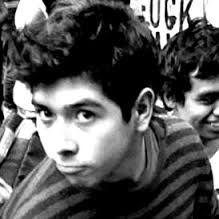 During the demonstration, a Metrobús station and a Metrobús (a rapid transit bus service) were burned.

The following day, Sergio was released for lack of evidence, while 20-year-old student Luis Fernando was charged with several major crimes and sent to South Prison (Reclusorio Sur) in Mexico City, where for a time he was held in solitary confinement, classified by the warden as a “pyromaniac.” Three businesses and the Mexico City government claimed 13 million pesos in damages.

Luis Fernando was involved in various political projects, including the Ollin Meztli Collective, the ik’ otik Cooperative, the Network Against Repression and for Solidarity, and is an adherent to the Zapatista’s Sixth Declaration. 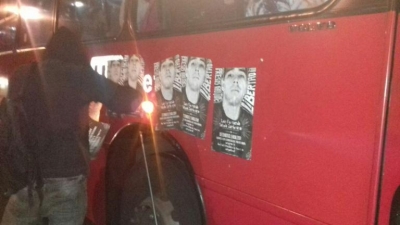 As part of the day for the freedom of our colleague Luis Fernando Sotelo,  prisoner since November 5, 2014 on the Third Global Day for Ayotzinapa, accused of setting fire to a Metrobus and its station, different groups and people in solidarity decided to go to nearby Ciudad Universitaria, UNAM, to make visible the situation which our partner is suffering. 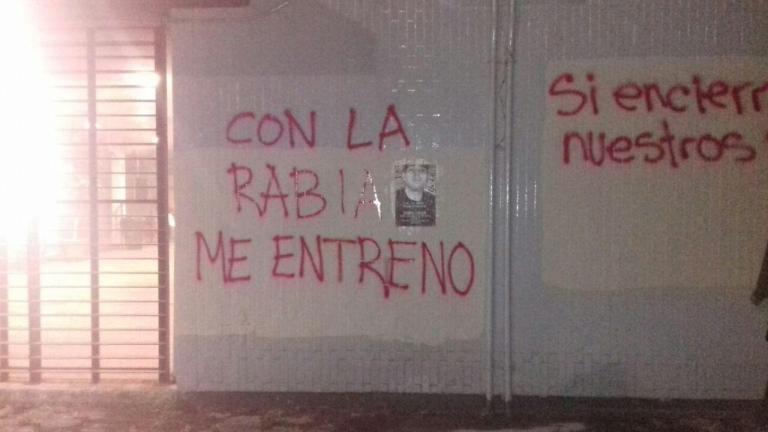 Solidarity to our colleague .. we denounce the act of the state and its policy of dirty war.

This arrest as many others is riddled with legal irregularities and without sufficient evidence and  our partner has spent more than a year and a half kidnapped by the state within the prison in southern Mexico City. 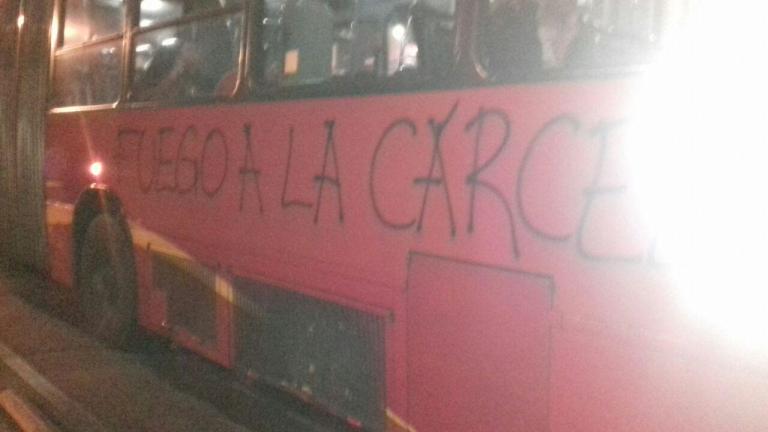 We demand the release of our colleague

male and female Prisoners— onto the streets 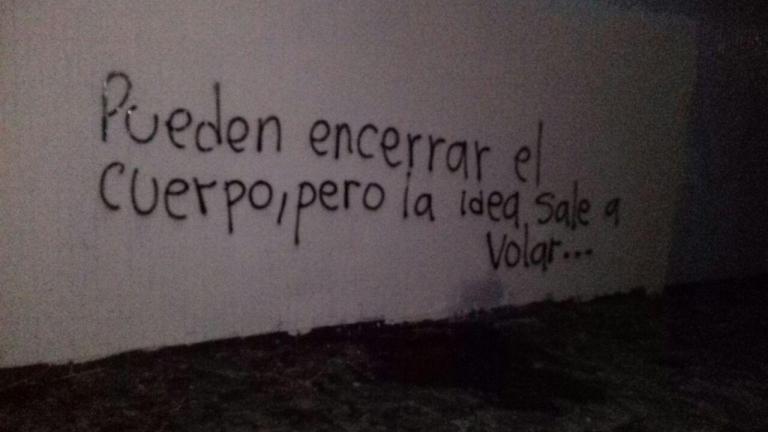 they can lock up our bodies.. but not our ideas

“We strongly condemn the brutality with which the police behaved,” reads a statement from the parents’ committee for the 43 missing Ayotzinapa students.

Ahead of the second anniversary of the disappearance of the 43 Ayotzinapa students, security forces cracked down on protesters commemorating the students in Guerrero’s state capital of Chilpancingo on Sunday, physically assaulting and detaining some of those involved in the march.

RELATED:
Fighting for the Disappeared in Argentina and Ayotzinapa

“We strongly condemn the brutality with which the police behaved and their excessive use of force,” reads a statement from the parents’ committee, which was established after the Ayotzinapa students went missing on Sept. 26, 2014.

In the text, the committee reports that eight students and two peasants are missing from Sunday, seven protesters were detained and “brutally beaten” before later being released, and three have been transferred to hospital with serious injuries.

“When the march concluded the police began firing teargas,” the parents’ statement reads. “The students tried to repel the aggression.”

The Attorney General of Mexico, or PGR, issued a statement ahead of the two-year anniversary saying it “reaffirms its commitment to society to investigate the crimes.”

“It is important to note that the investigation into the ‘Iguala Case’ remains open and that the Attorney General’s Office is working at all times to clarify the facts.”

RELATED:
Mexico: Priority in Ayotzinapa Case Is Finding the Students

The statement from the PGR goes on to claim the office’s investigation is one of the most “exhaustive” in Mexican law enforcement history.

The government’s official version claims local police apprehended the students, who had commandeered a bus to travel to a protest, and handed them over to a gang known as Guerreros Unidos.

According to authorities, the gang killed the students and burned their bodies in a garbage dump nearly 20 miles south of the town of Iguala, and then dumped the remains in the San Juan River near the town of Cocula.

But the parents, activists and human rights groups, both within Mexico and internationally, accuse President Enrique Peña Nieto’s administration of trying to cover up the potential involvement of federal agents in the kidnapping and disappearances.

Earlier in September, relatives of the missing 43 cut off all dialogue with the Mexican government after the lead investigator resigned for allegedly tampering with evidence—and was then awarded a promotion.

CNTE: the strike isn’t over…

Violent eviction of the CNTE from Chiapas occupation