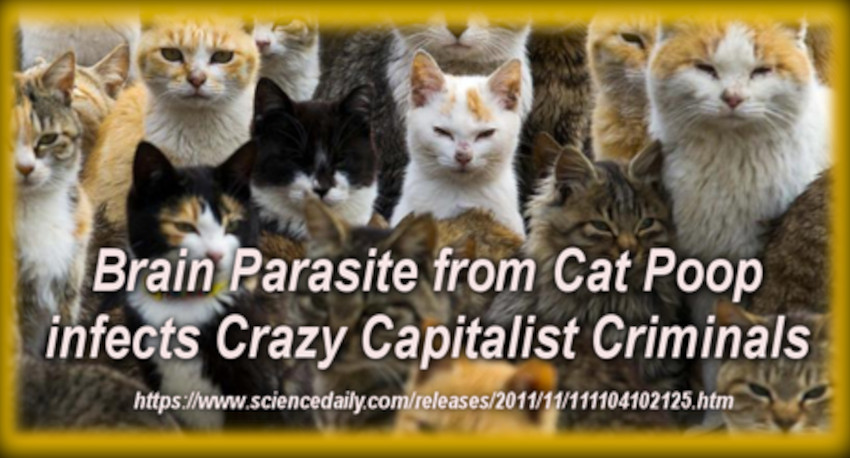 A parasite carried by cats and known to suppress fear may be the key driver behind the decisions of people infected by it to make bold moves and chronic risk taking, which could include firing workers, destroying rivals, manic mysogyny and other capitalist behaviours, a new study by The Royal Society B has revealed.

Toxoplasma Gondii is a parasite that affects many warm-blooded animals, but cats are its only known definitive host, in which it can reproduce. The parasite is peculiar because it is known to suppress fear and encourage risk-taking in some animals like rats, who thus become more vulnerable to a preying cat.

The new research, published in the journal Proceeding of the Royal Society B, points to a similar effect Toxoplasma has on humans. The researchers found people with toxoplasmosis are more likely to have started their own business than non-infected people.  continues below

Monique@plastic_mm1 out of 3 people in this world are infected with toxoplasma gondii. I’m convinced that’s why #donaldtrump has a strange & violent following

Millennial Headlines‏ @NotClickbait 31 The real reason behind Donald Trump‘s madness is, in fact, toxoplasma gondiiOnline Twitter speculation has claimed that the US president Donald Trump may be an unlucky victim of Toxoplasma gondii.

The research was based on analysis of a group of some infected 1,500 students in the US and their preferred fields of study. They were 1.4 times more likely to major in business and 1.7 times more likely to have an emphasis in ‘management and entrepreneurship’ over other business-related endeavors, compared to the general population, the study found.

However, Stefanie Johnson of the University of Colorado and her colleagues warned against taking Toxoplasma gondii to be the secret weapon of tycoons. Those infected with Toxoplasmosis are also more at risk of “car accidents, mental illness, neuroticism, drug abuse and suicide,” they wrote.

Toxoplasmosis is one of the most common parasitic infections in humans, with more than 30 million affected in the US alone, according to the Centers for Disease Control and Prevention (CDC). Most carriers never develop symptoms indicating that they have the disease.However our immune system normally neutralizes Toxoplasma without noticeable symptoms. Only when the immune system and natural defenses fail do the toxic capitalist symptoms emerge.The parasite can be caught through poorly-cooked food, while handling animals, especially cat excrement, or from mother to unborn baby. The latter case poses a serious risk to the child, since it can cause miscarriage or stillbirth.

Research shows infection by the brain parasite Toxoplasma gondii, found in 10-20 per cent of the UK’s population, directly affects the production of dopamine, a key chemical messenger in our brains.

I understand that there are very different rates of toxoplasmosis from country to country. Latin American countries have the highest, and South Korea has the lowest, I believe. Do you think toxoplasmosis could affect behavior on a national level?

White House Moves to Weaken EPA Rule on Toxic CompoundsThe Trump White House intervened to weaken one of the few public health protections pursued by its own administration, a rule to limit the use of a toxic industrial compound in consumer products …

answer by Dr. Jaroslav Flegr,.. Interview here How a Cat Parasite Affects Your Behavior, Mental Health, and Sex Drive
‘I believe it can have this impact. It was already published by another parasitologist that national personality can be partially explained by frequency of toxoplasmosis. This year, we published a very important paper showing that the frequency of a lot of diseases can be explained by differences in the prevalence of toxoplasmosis. Our data show a strong relation with epilepsy and cerebrovascular diseases including infarcts [heart attacks]. …’.

Is the Toxic Cocktail of chemicals Making some Americans Aggressive, Neurotic and Stupid

IQ Scores Are Falling Due to Environmental Factors … – Time

Thousands of more or less toxic chemicals are getting into our bodies, and every month dozens more, creating a Toxic Cocktail and all sorts of unforseeable health issues. see..Banned & Toxic ingredients Found In U.S Foods

The problem is nowhere more extensive than in the US, which is notorious for allowing any kinds of toxicity, from carcinogenic herbicides, sweeteners, growth boosters etc which are promoted by its corporate lobbyists, as well as consuming huge quantities of meat and the largest range of semi tested products.

see also> American Foods That Are Banned Around The World

Feeding the US Toxic Chemicals Banned in Other Countries …

Among the multitude of suspected side effects are damaged immune systems, autism, early senility, low sperm count and IQ deficiency. Few if any products have been adequately tested for their interaction with a multitude of others

Toxic Cocktail – Barbara Demeneix – Oxford University Press ToxicCocktail How Chemical Pollution Is Poisoning Our Brains, by Barbara Demeneix. Written by an expert who works with international authorities on chemical testing; Provides an easily understandable explanation of the links between between brain development and thyroid hormone, and how chemical pollution is undoing a process honed by evolution Toxic Cocktail provides a clear view of how many environmental chemicals interfere with brain development. As a result, this book looks at how we define and test IQ, the evidence for IQ loss, and how chemical pollution and thyroid hormone disruption can be actors in this process, as well as increasing neurodevelopmental disease risk.

IQ scores are falling and have been for decades – CNN

Chemicals Within Us – Science

Chemicals Within Us. … My blood level of one particularly toxic PBDE, found primarily in U.S.-made products, is 10 times the average found in a small study of U.S. residents and more than 200 …

Pretty hurts: are chemicals in beauty products making us …

May 23, 2019 American women use an average of 12 products a day – nearly 200 chemicals – according to a 2004 study by the Environmental Working Group (EWG), a non-profit environment and health advocacy group.

Any food that has been canned, dehydrated, or had chemicals added to it is a processed food, and these foods make up about 60 percent of the average American diet. They’ve taken over, and we have to FIGHT BACK. Know which toxic food ingredients to avoid: 1. Palm Oil

Chemicalcocktail affects humans and the environment Date: April 20, 2010 Source: University of Gothenburg Summary: Throughout our lives we are exposed to an enormous range of man-made chemicals …

For example, drinking water that serves nearly 100 million Americans isn’t even tested for PFASs, she noted. Unless people have their water tested, they have no idea whether they are being exposed to high levels of PFASs, Hu said. In addition, the health effects of these chemicals can build up over time, as they tend to remain in the body.

Chemicalcocktails increasing. Figures released for the first time at the conference showed that the number of toxicchemicals applied to onions, leeks, wheat and potatoes has been steadily increasing since the 1960s.

Our Enemy the FDA: Soft Killing The American People?