# ADM Occupiers threatened with eviction of their amazing alternative reality in their squatted island have launched a surreal Publicity Action .

The ADM occupied area, which includes an abandoned harbour, warehouses and forest has become  living European symbol of both cultural freedom and a possible route to an anti capitalist future. We can also argue that by organising Festivals continuously over many years the Adm has  attracted billions in wealth and goodwill to the Dutch city.

The ADM is due for eviction from Christmas day 25th December 2018.

Statement by ADM about the action at Real estate company.

Originally published by ADM.      Today we went to the headquarters of Chidda Vastgoed BV to present a cheque of 100 million euros to the heirs of Bertus Lüske in a massive golden box. There were about 50 people at the action, and none of the heirs of Lüske came out to pick up the present.

Why did we do that?
The city of Amsterdam gives an absurd gift of 100 million euros to the heirs of Bertus Lüske, by evicting the residents of the ADM.
Today we went to give a huge gift to Chidda Vastgoed B.V. on behalf of the city of Amsterdam. 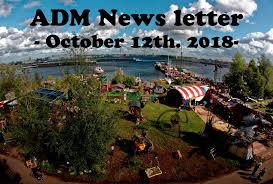 Due to the eviction of the residents of the ADM site and by allowing demolition- and asbestos removal company Koole BV to move to the ADM site, (while their activities are not fitting with the perpetual clause that is part of the site), the value of the site is increasing enormously. Money that shouldn’t go to the real-estate mafia but back to the citizens of Amsterdam!

The Amsterdam’ municipality can prevent this but does not dare to make tough decisions. Symbolically we therefore handed over the ‘ship with money’ on behalf of the municipality. And what is more symbolic than a sea container of the former Amsterdam’ Drydock Company.

What has happened again?
The history of the ADM (Amsterdam Drydock Company) starts when in 1985 the shipyard tragically goes bankrupt. Before the final bankruptcy, the municipality of Amsterdam had the ground of the shipyard sold to the ADM shipyard for a symbolic price.

The contractual agreement was that the land only can be used as shipyard (the perpetual clause). After being in disuse for years, the 42 hectares is sold to real estate boss Bertus ‘bulldozer’ Lüske in 1997 for 27 million guilders. In 2003 Lüske is killed in front of his own restaurant Frankendael on the Middenweg in Amsterdam East with an automatic gun.

The murder of Lüske was one of the first in a long sinister wave of liquidations in the Amsterdam’ underworld. A large number of these murders still echo, as is been shown in the ongoing trial against Willem Holleeder these days.

The citizen: the victim
In 1996, the ‘Committee Van Traa’ exposes in their report the underworld practice of laundering ‘black money’, often gained by drug trafficking and prostitution trade, to the upper world through the purchase of real estate. For the municipality of Amsterdam Bertus Lüske was an example of this in those times and decided eventually to buy him out for 27 million guilders in 1997.

All his life he had been investing in real estate (especially around Rembrandtplein), speculated with it and sold it with large profit margins. He let it hang out as organizer of free fight- and kickbox galas. He also owned for a long time a tanning salon close to the Rembrandtplein, with hardly any customers (…)

Tenants of his real estate were frequently confronted with violence and intimidation. He also purposely kept old buildings empty and let them deteriorate, so he could get easier a demolition permit. It was not surprising that squatters at that time called him their ‘favorite enemy’.

Photos on this article: Daisy Brasington (Remember the Future, Bristol)