Spokespeople from the YPG and YPJ Rojava defense forces  and the SDF multi ethnic militia are calling for international support and self reliance against the looming Turkish sponsored genocide, which will probably begin when the US troops are out and the Idlib mercenaries prepared. The US is apparently abandoning them after sacrificing thousands of volunteers to take back Raqqa, the ISIS capital and nearly all north Syria.

We are witnessing a new world atrocity. Apart from mass civil support and international volunteers the Rojava democratic revolution is left with no state support, with the US, Russia, Syria, Iran and Israel etc competing for the right to destroy it.

note: we use the term ´genocide´to indicate mass murder and ‘ethnic cleansing’ in a mission to suppress the identity, property, culture, language and history of a group of people.. what the Turkish state has often tried to do to the Kurds, Armenians  and other minorities.

Aldar Khalil: The peoples of the region will defend themselves by relying on their own power

After the American statements, the official of the Diplomatic Relations Committee in the Democratic Society Movement, Aldar Khalil, called on all the Kurdish people and the peoples of northern Syria to rely on their own strength, to escalate the struggle to the highest levels and to respond to all forms of the attacks.

Khalil pointed out that the peoples of the region have fought the terrorist gangs, and that these peoples and the protection forces will also confront and defend themselves against the attacks of genocide either from the Turkish state or any other hand, relying on their own forces.

At the end of his statement, Khalil called on all the Kurdish people to work now to turn all fields into fields of struggle against any possible occupying attempts or attacks.

see also.. Turkey: Incendiary Attacks and Banner Action by DGH & DGK-H in Solidarity with the Defenders of Afrin

If you are interested in starting at campus based chapter at your college or university. Please contact us for more information.

Click here to enter your address and ZIP code to find your representatives and senators. Then download this script and use it as a guideline to call.

URGENT STATEMENT FROM THE EMERGENCY COMMITTEE FOR ROJAVA
Dec. 19, 2018
With reports of the Trump administration planning to withdraw U.S. troops from Syria, along with disturbing new documentation released today on war crimes in Afrin, we are writing to alert our elected representatives and the public to the dire consequences should Turkey attack Rojava (the Kurdish majority region in northeastern Syria) east of the Euphrates, as it has promised.

Turkey appears poised to attack whether or not American troops are stationed there. On Dec. 12, President Recep Tayyip Erdogan made a
speech saying a Turkish offensive is imminent.
The US has warned Turkey similarly in the past with no real
consequences.

Avista saves town from fascist Turks with suicide Attack on Tank: No Pasaran

Turkey has already been signaling its intentions by sniping at civilians across the border and bombing Kurdish areas in Iraq including the Makhmour refugee camp and Mount Shingal, home to the Yazidis.

A year ago, without any provocation, Turkey crossed the border into Syria to invade and occupy Afrin, driving out its Kurdish citizens, looting and confiscating their property, taking hostages, and repopulating the area with
jihadis and Arabs from other parts of Syria in a demographic change that amounts to ethnic cleansing.

The U.S. ignored Kurdish appeals for help despite the help of the coalition of Syrian Democratic Forces (SDF) to defeat ISIS. Now the Trump Administration says it will withdraw troops from Syria.

Half the population of Afrin are expelled, many to  makeshift refugee camps in mid winter and their lands and property seized

We call on Congress and the American people to see that thisextraordinary but fragile democracy is not endangered. It is critical that the U.S. take this stand because:
Rojava is the only democratically-run part of Syria based on secular, feminist, and ecological principles.
Its values oppose both fundamentalism and dictatorship.
integration of other ethnicities and women into positions of power throughout society.
The SDF have consistently proven to be the only reliable US ally in the war against ISIS. Now that they have almost finished the job, and taken immense losses, it is essential that we honor our moral obligation to the people who fought ISIS by helping them realize a peaceful co-existence with all regional powers.
Rather than deserting Rojava, the U.S. must commit to giving the Democratic Federation of Northern Syria (the official name of Rojava), economic and political as well as military assistance, and should put all possible pressure on Turkey to reopen peace negotiations with its own Kurds.

As Aliza Marcus said recently in the New York Times:
‘The U.S. has faltered in Syria too many times in the past. It can prevent a bloodbath and the displacement of hundreds of thousands of people, if it demands Erdogan stand down. It can press Turkey to reopen peace negotiations with its own Kurdish population, stopping the endless cycle of
violence. We urge the Trump Administration and Congress to act to defend Rojava before it is too late. Emergency Committee for Rojava Steering Committee The U.S.-based Emergency Committee for Rojava was formed in March 2018 after the Turkish invasion of Afrin and is supported by prominent American academics and activists’.

This coming year the Turkish fascist state has proposed a genocide in Rojava, Syrian Kurdisyan. After the invasion and killing of Afrin, of the latest attacks on Kobane that are swelling the refugee camps (which he also attacks!), and the entire list of killings and selective jails, Erdogan threatens to attack Rojava and its revolution

( Note: as with the Afrin invasion atrocities Erdogan first pours out lies and propaganda as he prepares the FSA mercenaries, including Al Qaeda and ex ISIS terrorists in Idlib (and his giant NATO army), raising their wages of death and openly promising them loot, rape, properties and land in Rojava, hoping to then annex, ‘cleanse ethnically’ and ‘Turkify’ the whole of Syria. This man is worse than Hitler! )

These threats are serious, and we know they have the means to do so.
Fighters and the general population say that, as always, they will fight to defend themselves from these attacks.

Each of these decisions from the offices of Turkish power and supported by European armament, will end up with many deaths, people injured, more refugees, food shortages and a world of pain.

Once again, people of all ages are forced to defend themselves from fascist terror, which endorses groups like the Islamic State and, on the other hand, criminalizes the resistance and the Kurdish Revolution.

Let us not forget that the Revolution that is taking place in Kurdistan is a feminist and anti-capitalist Revolution, that they are also our partners and that therefore our solidarity becomes essential.

We expect from these (relatively) rich and privileged countries the rejection to Erdogan and anger for the complicity and silence of the rest of the world.

Strength for those who fight in Kurdistan! 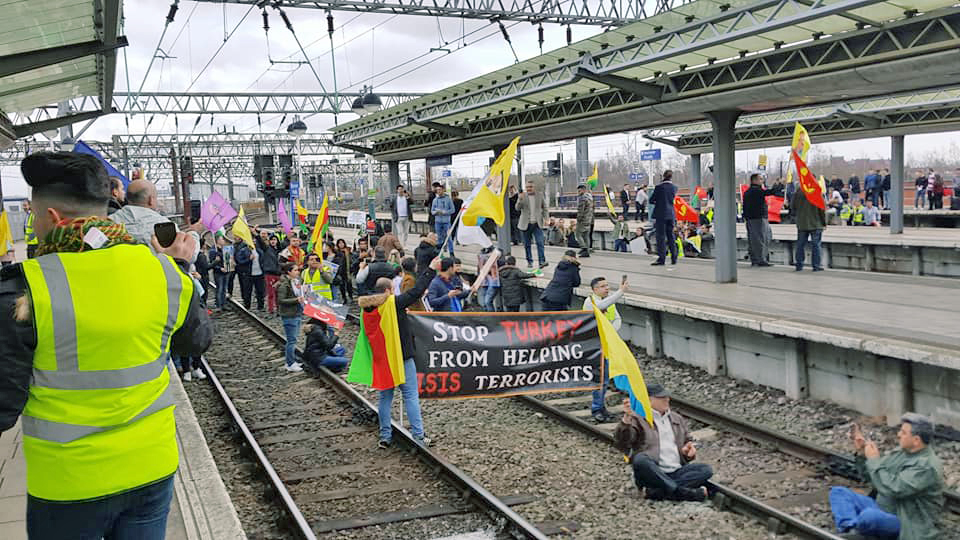