Extinction Rebellion has managed to organise an impressive number of people into a civil disobedience movement. They have managed to shut down and occupy significant parts of London including numerous major road junctions over the past week.

They have many admirable principles such as “breaking down hierarchies of power for more equitable participation” and “creating a world that is fit for generations to come”. However is civil disobedience really the best method for getting action to be taken on climate change?

The aim of Extinction Rebellion’s civil disobedience campaign is to attempt to cause enough disruption so that the State meets their demands to bring back order – as appearing to have order and control is important for the State. It is quite possible that the State will partially concede to a couple of the demands of extinction rebellion – however what isn’t going to happen is a significant system change.

This is an issue because the root cause of climate change is capitalism with its requirement for constant growth. The people in the corridors of power are simply too vested in capitalism to allow something better to replace it.

Because climate change is a product of capitalism, our aim must not be to get concessions from the system but to replace it. The police have still arrested over 1000 people at the XR protests. Despite such vast numbers of arrests, which was actually the intention of XR, the State rarely capitulates in the face of civil disobedience on the part of tiny mobilised minorities, even highly committed ones like XR.

Generalised mass mobilisations, however, based upon civil disobedience, such as the anti- Poll Tax campaign with widespread non-payment, community mobilisation and anti-Poll tax riot in London in 1990, were relatively successful. ..              continues below

The Green Anti-Capitalist Front is a new movement  supported by radical groups and individuals across London and the UK which aims to supportthe surge of actions being carried out by Extinction Rebellion while also offering a radical alternative for those who see the abolition of capitalism as the only real means of avoiding complete ecological catastrophe. We also recognise that many of us would like to be involved in actions which do not include asking to be arrested or collaborating with the police. We are calling for an open assembly where we can decide how we wish to interact with Extinction Rebellion and what alternative actions we can pursue.

The idea that the police are potentially our friends, which is spread around by XR, is just wrong. Many people were abused by the police (especially people who are part of a minority) with people being dragged into cells and stripped searched by force or threatened with broken bones.

The nice police officers you might come across when you’re protesting “nicely” pretend to be friendly to get information and to get into peoples’ heads, but they will turn into brutes the moment they are ordered to. This idea that the police are possible allies is harmful to everyone who has been abused or has suffered systematic abuse from the police as it marginalises their experiences. 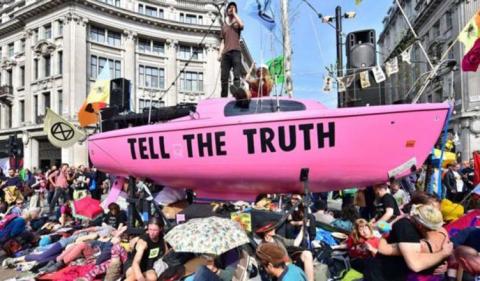 And despite the best efforts of thousands of people for over a week, how many police officers have thrown their badges on the floor and refused to serve a regime which throws people in cells for protesting what is going to kill billions of people?

It is obvious that the police are not going to change sides and help shut down all the different things which are poisoning the planet. Rather, as was shown as the week drew on, they will continue to protect them. Furthermore, it is only a matter of time before the police start using more heavy-handed methods (the bully cannot let people stand up to him and get away with it!).   continues below…

The integrity of XR as an organisation was dealt a blow on Easter Monday, when its Twitter account started plugging links to a new website called XR Business, which had been announced in a letter to The Times signed by a host of leading lights in the green business community, including former CEO of Unilever Paul Polman, founder of Ecotricity Dale Vince, The Eden Project’s Sir Tim Smit, founder of Solarcentury Jeremy Leggett, Chris Davis, CSO at The Body Shop International, Safia Minney, founder and former CEO at People Tree Fair Trade group, and Diana Verde Nieto, CEO and co-founder, Positive Luxury Ltd, as well as senior executives at a host of sustainable investment firms, including WHEB, Zouk Capital, Next Energy Capital, and Triodos Bank UK. .

After a flood of internal protest the site has been ”temporarily suspended”. The site included a list of “business leaders” some in XR, who have identified environmental catastrophe as yet another get-rich opportunity and are prepared to hijack and exploit people’s real love for life and nature in order to push their profiteering agenda. It remains to be seen if XR supporters can use direct democracy to expel or subdue the clique of rightwing capitalist leaders who seem to be in control and who announced the next phase should be themselves negotiating with the rich and powerful.  (However the much maligned Greta Thunberg came out in favour of a climate ‘general strike’.) Meanwhile we are better off distancing ourselves and supporting by using direct action pressure.  see also ..XR Business: Green business leaders in support

Therefore, our attempts cannot be restricted to just civil disobedience as it is not capable of dismantling the capitalist system. Instead of imploring the State to stop doing evil things, we must stop these evils ourselves using a wide range of tactics which allow us to attack what is destroying the planet.

But we must remember, because any meaningful response to climate change requires system change, the manner in which we change the system is incredibly important too. If we just have a few thousand people leading the charge we risk making a society which doesn’t represent the needs of everyone – and risks replacing our current form of oppression with a new one. We need to have a mass, global movement from the entire populace to ensure the new system is a good system.

So what’s the alternative? Imagine if the thousands of protestors in London, instead of peacefully occupying public spaces started organising with the public to achieve mass action against things like fossil fuel plants (as in industries?) and the like.

Instead of us asking those powerful people who are benefiting from the destruction of the environment to stop destroying the planet – we could fight to just stop them whether or not they agree to do this! Ultimately though, this will mean a revolution to get rid of capitalism and replace it with a society based on need not profit and exists in harmony with nature.

One thought on “Extinction Rebellion .. We need Direct Action not Symbolic Pleading”