The Zapatista journey has marked the lives of Indigenous peoples and peasant communities with its teachings of autonomy and dreams of other possible worlds.

However, the southeast of Mexico continues to be plagued by extreme poverty and violence generated by criminal economies. In this context, the collective Fases de la Luna promotes educational processes of political training to eradicate violence against women and promote autonomy.

In southern Mexico, the light ignited by the Zapatistas during the First International Meeting of Women in Struggle is still illuminating and expanding.

Although there are strong winds that try to extinguish it, the collective Fases de la Luna (Phases of the Moon) is one of the many experiences of organized women who keep the flame glowing and seek to project it in their territories.

Located in the Chiapas-Guatemala migratory corridor, the organization cannot be explained without the struggle of the Zapatista communities and peoples.

Many of the women’s organizations that are building community networks in the communities and towns of Chiapas are echoing the Zapatistas, the hope of building autonomy and the revolutionary ideas promoted by Liberation Theology.

The southeastern Mexican state has been characterized as a place of resistance and dreams of building very different worlds, but it is also one of the most politically controversial states in Mexi

Extreme poverty and violence in Chiapas

Twenty-eight years have passed since the uprising of the Zapatista Army of National Liberation (EZLN): the social movement that marked the history of the country for daring to walk an emancipatory political and ideological path from an Indigenous perspective.

In spite of the low intensity warfare promoted by the state and federal governments, the insurgent movement is still alive. In this historical process, women have occupied a key place and their presence is notable in all areas of work: promoters of education, health, agro-ecology, insurgents, militias, sub-commanders and female drivers.

After two years of pandemic, the National Council for the Evaluation of Social Development Policy (CONEVAL) reports that Chiapas is the state with the highest index of population living in extreme poverty.

In addition to its precarious situation, several processes marked by violence converge in Chiapas: the migrant route, criminal economies that tend to control the territory, drug trafficking, militarization and forced displacement.

The crossfire disrupts the daily life of the communities and, in these scenarios of terror, adult and young women are the most affected because of their gender condition.

Crossfire disrupts the daily life of communities and, in these scenarios of terror, adult and young women are the most affected because of their gender condition.

Since mid-2021, in the Comitán-Huehuetenango border corridor, several confrontations with firearms have been observed in the municipalities of Frontera Comalapa and La Trinitaria.

Although government agencies have not mentioned the identity and origin of the criminal groups, people who live in the area mention that the violence is due to the dispute over territory between the Jalisco Cartel Nueva Generación and the Sinaloa Cartel.

Attacks have been on the rise and, since January 2022, there has been talk of business owners being charged “protection rackets” and an increase in the number of missing persons in the municipality, especially young men and women.

“Entire families are coming forward to ask for help and are being displaced by the violence. Those who can, move to Comitán, but others go to Trinitaria because life is cheaper,” says Timo, a human rights defender from the border region. 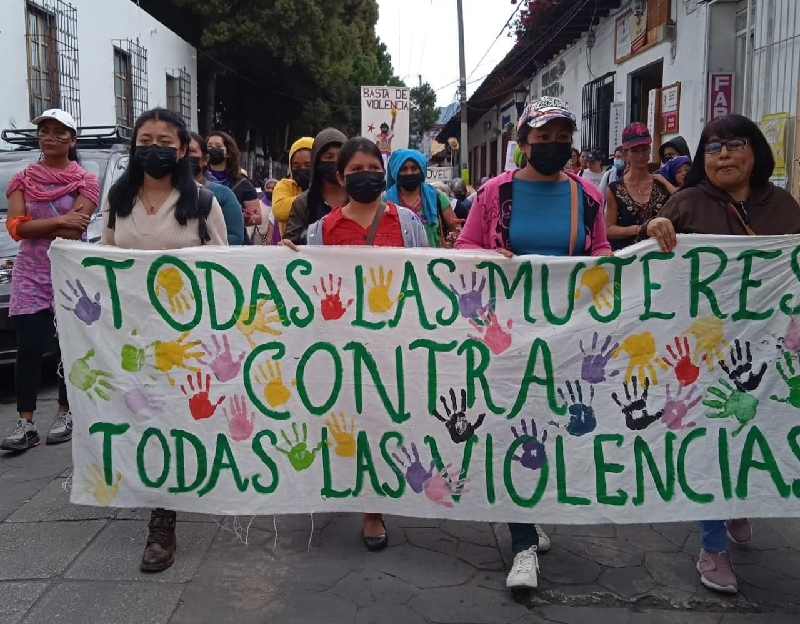 Women gathered under the moonlight

The collective Fases de la Luna was organized in 2016 with the aim of building spaces with Indigenous, peasant and rural women. The organization promotes educational processes of political training that help stop violence against women and enable other ways of reproducing peasant and Indigenous life.

It is made up of women of Tojolabal origin and from the marginal urban areas who are part of the ranks of the Basic Ecclesial Communities in the municipality of Margaritas.

“We see that violence is the first seed of death that damages the territory, as if it were a transgenic seed.

For us, defending the territory means eliminating violence in general, at its roots.

But especially the violence that harms women, young women and girls”, emphasizes Lourdes during one of the monthly assemblies held with the parish neighborhood councils.

The women attend daily so that their voices are heard and taken into account to create collegiate strategies to eradicate violence in their neighborhoods and communities.

“Violence is the first seed of death that damages the territory, it is as if it were a transgenic seed. For us, to defend the territory is to eliminate violence in general, from the very root”.

The members of Fases de la Luna have promoted three women’s groups in the municipal capital of Margaritas, they influence neighborhood councils and promote educational strategies together with other women and men from the border corridor of Chiapas.

During the implementation of this educational process for the defense of their territories, they identified some challenges: the need to articulate with organized women from other territories to weave a community network of women interested in training for the prevention of violence.

Thus, in 2017 they began to meet with organized adult women from the neighboring municipalities of Comitán and Trinitaria.

Observing how feminicidal violence was increasing in the region, they felt the need to think that in order to eradicate violence at its roots it is necessary to (re)learn new ways of relating.

For this reason, they decided to join forces with a group of men from the marginal urban area of Comitán called Hombres G, who are building spaces with Indigenous and rural men with the purpose of rethinking hegemonic, peasant and Indigenous masculinities.

The objective of this articulation is that the political, religious and moral authorities can attend the meetings between men and begin to have allies that support them in continuing educating to eradicate violence in the territory.

Although women are the protagonists of change and the driving force of the struggle, the Fases de la Luna collective understood that in order to think about a radical transformation of the community, it is necessary to rethink the relationship between women and men.

The fireflies of Chiapas

The members of Fases de la Luna observe that young people are being threatened, due to increased migration in the area and organized crime. “When I leave my house, I just think: I don’t want to be next,” confess young women in the community assessments organized by Fases de la Luna.

There are several causes for this increase in violence. On the one hand, the community fabric that sustains them is broken and needs to be rewoven. On the other hand, young people are being left without the possibility of building life projects in the short and medium term. For this reason, with the organizational creativity that characterizes them, they are undertaking a series of conversations between adult and young women and men to project training spaces on a larger scale where the voice of the youth is present.

In the diagnoses carried out in the municipal capital of Margaritas with members of three neighboring communities from a feminist and community perspective, they analyzed the importance of organizing, but above all of remembering the peasant and Indigenous culture of non-violence. In this way, they recalled from dusted memories a Zapatista principle: “To convince and not to conquer”. With this key, they promote training processes for the depatriarchalization of relationships and the recovery of the social fabric in order to defend and build other ways of doing and living the territories.

Like fireflies in the dark, the women organized in the border corridor walk through the territory sowing new and different pedagogies, in order to find ways to stop the violence that ravages our bodies-territories, day after day.

Delmy Tania Cruz Hernández is a researcher and professor of the Feminist Studies and Intervention Program at the Center for Higher Studies of Mexico and Central America (CESMECA-UNICACH). She is an anti-racist feminist activist and popular educator.

One thought on “Chiapas: Indigenous women weaving territories of life in the crossfire – English/Spanish”