Members of the Cuninico community blocked the passage of a tourist boat to draw government attention to a toxic oil spill.

An indigenous group in Peru’s Amazon rainforest has freed about 100 riverboat passengers – including foreigners – who were held for a day in protest over what the community alleged to be government inaction over toxic oil spills.

The Cuninico indigenous group, from the Urarinas district in Loreto province in Peru’s Amazon rainforest, had held the passengers – which included citizens of France, Germany, Spain, the United Kingdom, the United States and Peru – to raise awareness about the oil spillage in a local river, according to local media.

“We were just all freed, we have boarded a boat and are on our way to (the city of) Iquitos,” one of the freed tourists, Peruvian Angela Ramirez, told Reuters news agency on Friday.

Peru’s independent public defender agency said on Twitter that “after dialogue with the (head) of the Cuninico communities, our request to release people was accepted”.

Local media outlet RPP said none of the tourists was harmed during the protest.

Residents of the community of Nueva Alianza,protest one of dozens of earlier oil spills

The UK’s foreign ministry said in a statement it was in contact with local authorities regarding a “very small number of British nationals involved in an incident in Peru”.

The chief of the indigenous group, Watson Trujillo, said all the tourists had departed along the Maranon River just after midday on Friday onboard the vessel named Eduardo 11, which had been held since the day before by residents of Cuninico.

The passengers were en route to Iquitos, the main city in Peru’s Amazon region, he said.

He also said the people of Cuninico would continue protests – and blocking the passage of river boats – until the government gives them concrete help to deal with the pollution affecting their community.

“We have seen ourselves obliged to take this measure to summon the attention of a state that has not paid attention to us for eight years,” he told The Associated Press by telephone.

He asked the government of President Pedro Castillo to declare an emergency in the area to deal with the effects of oil spills.

Trujillo said oil spills in 2014 and again in September this year “have caused much damage” to people who depend on fish from the river as a significant part of their diet.

“The people have had to drink water and eat fish contaminated with petroleum without any government being concerned,” he said.

He said the spills had affected not only the roughly 1,000 inhabitants of his township but nearly 80 other communities, many of which lack running water, electricity or telephone service.

Peru’s Minister of Mines and Energy Alessandra Herrera Jara said in a series of tweets that her ministry was responding to the community’s request and an environmental emergency had been declared on September 24 in the area affected.

The minister also called on the community to respect the rights of transit for all passengers.

Peru’s Health Ministry took blood samples in the region in 2016 and found that about half the tests from Cuninico showed levels of mercury and cadmium above those recommended by the World Health Organization.

“The children have those poisons in their blood. The people suffer from stomach problems – that is every day,” Trujillo said.

In January, Spanish energy firm Repsol announced it had begun a clean-up operation following a large oil spill on the coast near Peru’s capital Lima.

The government has said Repsol spilt some 6,000 barrels of oil into the ocean near its La Pampilla refinery and that dead seals, fish and birds had washed up on nearby shores covered in oil, while fishing activities in the area had to be suspended.

Peru com­mu­ni­ty plans to restart block­ade of mine road amid truceLead­ers of the Co­po­raque dis­trict promise to con­tin­ue to block the road lead­ing to Las Bam­bas cop­per mine.Published On 14 Feb 202214 Feb 2022 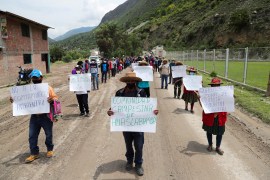