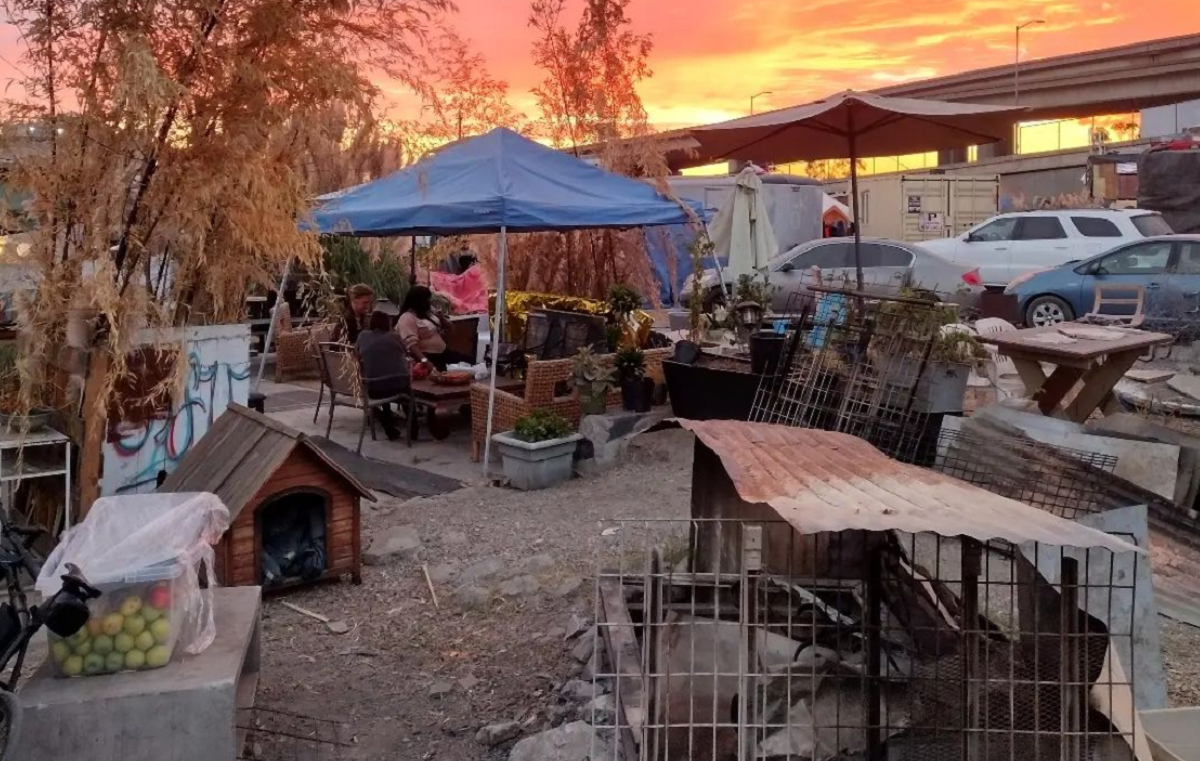 Use Up/Down Arrow keys to increase or decrease volume.

Over the last few months, residents of the Wood Street Commons, a self-organized community located in Oakland, CA have organized protests and filed lawsuits, in an attempt to stop their eviction and push the city to grant them access to public land.

After a series of massive sweeps throughout 2022, remaining residents face another round of displacement on January 9th, only days after a monster storm has rocked the bay area.

For over a decade, hundreds of residents have lived in the sprawling encampment off of Wood Street in West Oakland, creating a self-organized community known for its communal infrastructure made out of cob. As one report wrote:

Hundreds of residents and their individual and shared compounds span Wood Street from 18th to 34th Streets in the shadow of Highway 880. The Wood Street Commons, on the south side of the encampment, is on Oakland city property, while the northern portion, including the Cob on Wood community center, is on Caltrans land. The residents consider the area to be their home, although their community is not sanctioned or supported by city services. There have been persistent efforts by the City of Oakland and Caltrans to clear them from the space, in which makeshift homes, RVs, and cob structures are interspersed with vacant vehicles and scattered, illegally dumped garbage. Community members throughout the encampment have rallied together to create a loose government model in an effort to prevent their own eviction.

There is increasing need for such communities, as houselessness is exploding across Oakland and the wider bay area in the face of a massive housing crisis and the ongoing pandemic. As Prism Reports wrote:

In the past 10 years, Oakland’s houseless population has doubled, having grown by 1,000 people since the start of the 2020 pandemic alone. With over 5,000 unhoused people, the City of Oakland recently received $5.6 million dollars of Homekey funding for transitional housing acquisition and rehabilitation, totaling $55.5 million in State Homekey funds since 2020 intended to house Oaklanders. However, according to organizers at Wood Street, the city’s solutions to the housing crisis are not enough, exacerbated by the continued economic inequality that hits Oakland’s most vulnerable.

As Wood Street resident John Janosko, also featured on this podcast, wrote in The Mercury News:

Wood Street Commons supports those who have no material resources, no place to go, no hope. We are a 24/7 resource center with shared infrastructure for water, power and security, as well as a free store, health clinic and communal bathing and kitchen facilities.

For many years, Oakland police have been telling the city’s unhoused residents that they would be left alone if they moved to Wood Street. Now officials are telling us we must leave and have already begun the process of evicting the community’s 300 residents. It is impossible to overstate how devastating this loss of home and community is. And it does nothing to remedy the homelessness crisis. With nowhere to go, residents have no choice but to re-establish their camps nearby.

In fall of 2022, evictions of the Wood Street community began, as Caltrans and city workers destroyed homes, communal dwellings, and residents personal property and belongings. In response, protesters set up barricades and faced arrests, as supporters and residents attempted to stall the waves of sweeps.

In mid-October, members of the Wood Street community set up a protest encampment in front of city hall, as more encampments were established on Wood Street, only to be swept by law enforcement. Other residents who were displaced by previous sweeps moved into another section of the Wood Street encampment that still remains squatted on land owned by the City of Oakland, which is currently threatened with eviction, starting on January 9th.

As cities across the US crackdown on encampments and people living in their vehicles, the need to build collective resistance to this displacement is needed, now more than ever. Leaning from and supporting the struggles of the Wood Street community hopefully will aid us in developing this capacity.