France -Since massive mobilizations swept the nation on March 31st against proposed Labor legislation, thousands of people have held nightly occupy style public assemblies coined ‘Nuit Debout’ or Night Stand to further a movement that has grown into a full-on rejection of the current systems of governance.

The Nuit Debout public assemblies released the following statement.   (List of demo’s scheduled for Saturday below)

Our mobilization was initially aimed at protesting against the French Labour Law. This reform is not an isolated case, since it comes as a new piece in the austerity measures which already affected our European neighbors and which will have the same effects as the Italian Job Acts or the Reforma Laboral in Spain. This concretely means more layoffs, more precarity, growing inequalities and the shaping of private interests. We refuse to suffer this shock strategy, notably imposed in the context of an authoritarian state of emergency.

The debates taking place in the assemblies on Republic square prove that the general exasperation goes way beyond the Labour Law and opens a more global issue: the reconsideration of a social and political system stuck into a deep crisis and on its way out. We will not be the ones crying because of its end.

This movement was not born and will not die in Paris. From the Arab Spring to the 15M Movement, from Tahrir Square to Gezi park, Republic square and the plenty of other places occupied tonight in France are depicting the same angers, the same hopes and the same conviction: the need for a new society, where Democracy, Dignity and Liberty would not be hollow shells.

Supporting testimonies received from abroad warm us and strengthen our commitment. This movement is yours too. It has no limit, no border and it belongs to all of those who wish to be part of it. We are thousands, but we can be millions. Together, standing, awake. Let’s rise up together.

Map of events tomorrow in Spain  View image on Twitter 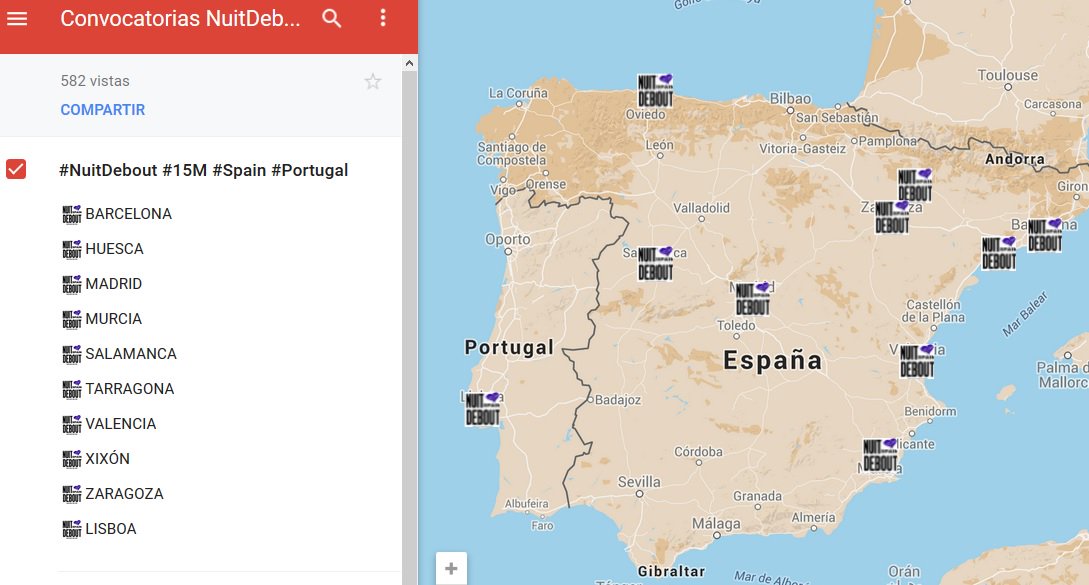 –  “The assembly is a central part of the Spanish left tradition. Social movements have always seen themselves through the prism of assemblies.”

We don’t mean controlled school assemblies, much less those of religious sects, who use the form just for a semblance of participation without the danger of maybe taking a vote.

We mean real assemblies.. to sit around in a circle with no fixed agenda and no attempt to control, talking things out until decisions can normally be reached by consensus.

The Spanish 15M movement evolved from occupying Squares to hundreds of local assemblies, which in turn set off thousands of community initiatives. The beauty of a real assembly is that no one can take power, and predatory Parties, Unions and egoistic self seeking ‘leaders’ get sidelined, allowing revolutionary energy to flow.

END_OF_DOCUMENT_TOKEN_TO_BE_REPLACED

At 4 am on Friday, 1,500 BOPE killer cops took under siege a building, in northern Rio, which had been occupied by homeless working people, teargasing and attacking people in their sleep.  Another person was executed during protests against the military occupation of Mare, on Saturday.

Residents believe that 2 kids and an old man have been suffocated to death in the military assault. Dozens have been injured, some lost their eyes.

Residents believe that two children and an old man have been killed – it is not known who are their names, or if they were killed due to the teargas or the smoke from the building set on fire during the forced eviction.  27 people had been arrested when they defended against the police attack.

END_OF_DOCUMENT_TOKEN_TO_BE_REPLACED

Mass occupation of Historic Workers center
Poblenou neighborhood, Barcelona
This action is a response to the unilateral closure by BARCELONA CITY COUNCIL  of the Flor De maig (May Flower) center.

This afternoon, amid a festive atmosphere and protest, five hundred residents Poblenou opened new historical workers social center “La Flor de Mayo”, evicted by the City Council last May, recoverting the last historic building of the cooperative movement that still had  social and cultural use in the district.

The center will be used by over 290 local organisations, and be run on the Assembly system, with no hierarchy. END_OF_DOCUMENT_TOKEN_TO_BE_REPLACED

Barcelona — Psychologist Angels Corcoles recently taught a seminar about self-empowerment for women, and when she finished she got a check with her fee. The amount was in hours, not euros.

But Corcoles didn’t mind. Through a citywide credit network that allows people to trade services without money, the 10 hours Corcoles earned could be used to pay for a haircut, yoga classes or even carpentry work.

At a time when the future of the euro is in doubt and millions are unemployed or underemployed with little cash to spare, a parallel economy is springing up in parts of Spain, allowing people to live outside the single currency.

In the city of Malaga… END_OF_DOCUMENT_TOKEN_TO_BE_REPLACED