Norwegian Palestine-solidarity activist Kristin Foss was shot twice in a week by Israeli soldiers. The first time she was shot whilst standing with her hands raised, and the second occurred when she was standing against a wall. 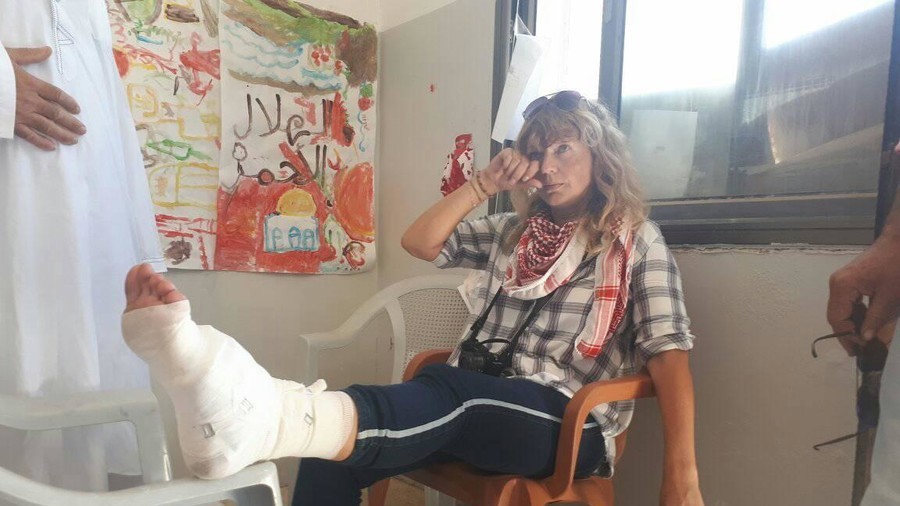 photo of Kristin Ross, shared with thanks

Kristin was standing still with her hands raised when she was shot in Kafr Qaddum during a weekly demonstration last Saturday.

Foss and another activist were walking with an elderly Palestinian man who asked them to help him get back to his car which the soldiers were using as a shield. International activists often attend Palestinian protests in a bid to discourage Israelis from using excessive force.

The man was talking to the soldiers and Foss and the other activist were filming from a distance. A soldier tells Foss it is dangerous and she responds: “It’s dangerous that you’re pointing a gun at us,” as a shot is fired. Seconds later, another shot is heard and Foss is hit in the abdomen.

The Norwegian Ministry of Foreign Affairs said last week it had asked the Israeli authorities to explain the circumstances, VG reports.

Foss, who is an International Solidarity Movement volunteer, returned to the village the next Friday to support demonstrators. The weekly protests at Kafr Qaddum are to demonstrate against the closure of a road which has been closed to Palestinians for seven years, forcing them to travel more than 14 km (9 miles) to reach the regional capital of Nablus.

Bruises and wound on Foss’s abdomen

In a video, filmed before she was shot, she said that although the demonstrations had not started, the IDF had already “invaded the town.”

Foss was leaning against a wall “well behind” the demonstrations when she was shot in the ankle by a rubber bullet, she told RT.

When she was in an ambulance with another man who had been shot in the shoulder, they had to turn back after another person was shot in the head.

An IDF spokesperson told RT that the protests were “violent riots” and “Palestinians threw stones at IDF soldiers and burned tires.”

US Military Aid to Israel Set to Exceed a Record $3.8 Billion

Aug 3, 2018 – WASHINGTON — In an event largely overlooked by the U.S. media, the Senate passed a bill on Wednesday that would provide Israel with $3.3 billion or $23,000 Per Year for Every Jewish Family Living in Israel

But they do start to listen ( a bit) when targeted boycott’s hit their pockets.

Lets organize to force them to lift the siege of Gaza and at least compensate the Palestinians and treat them equally.

You can really help.. check out the BDS movement below …

Thanks to strategic and creative campaigns taking place across the world, the BDS movement is having a real impact and inspiring many to act for justice.

The campaigners said that next Monday will be an international day of solidarity with the hunger strikers in the Israeli jails, especially the captives Samer al-Issawi and Ayman Sharawna, who have been refusing food for nearly half a year.