Latest reports say that IS attackers have been re-armed and have taken more than half of Kobanê the last stand of the progressive YPG Kurdish volunteers.

All of the surrounding countryside has been lost, with nearly 200,000 refugees in Turkey.

Kurdish reinforcements are still held back by the Turkish army in nearby Efrîn i Cizîrê.

Food water and ammunition are running out and the IS forces are massacring, burning, raping, looting and imposing Sharia law.

The Turkish army are sealing the border and giving direct physical and medical aid to the Islamist forces.

In the last few days over 30  people have also died in Turkey in protests against Turkish support of IS and blocking of Kurdish reinforcements.

The amazing resistance to barbaric macho IS by the progressive revolutionary volunteers in Kobanê is summed up in the fate of Arîn Mîrkan , among thousands of others.

Arîn Mîrkan was a commander of the Women’s Defense Units (YPJ), defending the Kurdish city Kobanê against the attacks of the Islamic State. Kobanê is on the 21st day of courageous resistance against IS. Arîn was surrounded by the jihadists, but instead of surrendering and falling into their dirty hands, she detonated herself and killed many IS-members with her. END_OF_DOCUMENT_TOKEN_TO_BE_REPLACED

Yekaterina Samutsevich promises band mates, who remain in prison, she will continue struggle against president and to continue taking part in Pussy Riot’s anonymous performances.

Yekaterina Samutsevich, the Pussy Riot member freed by a Moscow court this week, has promised to continue taking part in the band’s anti-Putin protests, saying she would be “more careful and more clever” to avoid another arrest. 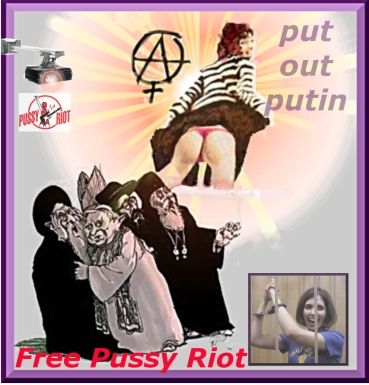 On Friday, in her first newspaper interview, Samutsevich said her parting words to the two band members who remain in jail were that she would continue their struggle against the president. But she expects state pressure on her to grow despite her new-found freedom… END_OF_DOCUMENT_TOKEN_TO_BE_REPLACED