From territory under domain of Brazilian government – An urgent call for solidarity! 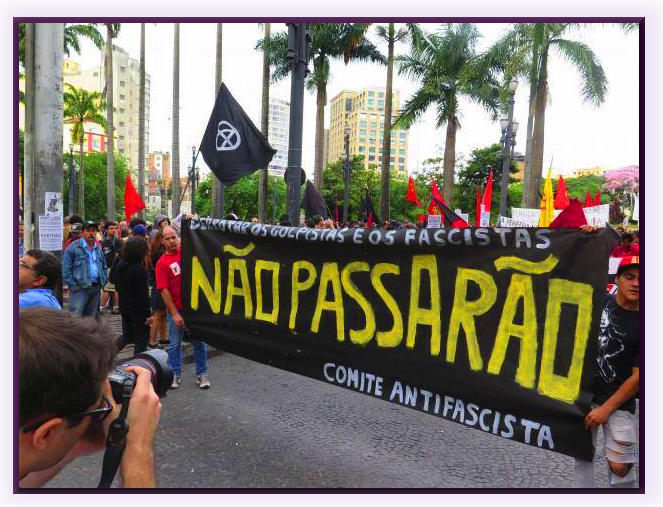 ALERTA ANTIFASCISTA! FROM THE TERRITORY UNDER DOMAIN OF BRAZILIAN GOVERNMENT! AN URGENT CALL FOR SOLIDARITY!

On May 2, at eight o’clock, local antifa and members of the Palestinian refugee community from São Paulo, called a protest against an anti-migrant demonstration organized by fascists. We arrived on Paulista Avenue, the main thoroughfare in Sao Paulo with a small group of 15-20 people to shut the demonstration down.

We fought with the fascists and the Military Police intervened on the fascist side. Eventually all the antifa were arrested. Everyone was released from the police department, except four migrant comrades.

One of the Palestinians being arrested

They are expected to be in court to the sometime in the next few days. They may be prosecuted under the new antiterrorism laws which were signed by Dilma Rousseff, the ex –President from the center-left Worker’s Party.

If our comrades aren’t released then we will hit the streets in solidarity. We also know that these arrests were all set up on purpose. There is a chance of our four comrades being deported also. They came here because they were searching for survival. They have children, family and friends here.

We need everything that might be possible. We ask for possible support and actions that express solidarity. We need international strength.

This is not only for the freedom of our comrades but also for our struggle against nations and borders. Solidarity and communication is our weapon.

VIDEO USED BY FASCISTS TO CLAIM TERRORIST ATTACK ON THEM

Below is the video released by the fascists (on their Facebook Page) who claim to have been attacked by ‘Arab Terrorists’ and that this video shows a named palestinian throwing a ‘home made bomb’.

To me it looks more like our brave comrades stopped the march but were beaten up by the anti immigration demonstrators and  the police before being dragged away.

And here is a video released later, appoarently by comrades disputing the fascist version

by Bibiana Borba and Bruno Ribeiro, at O Estado de S.Paulo03 May 2017 | 0650
SÃO PAULO, Brazil (AP) – At least four activists from immigrant and refugee movements have been detained since the early hours of Wednesday morning, 3, in the 78th Police District in the Jardins region of western São Paulo.

The police station confirmed the arrests and the incident is under way but did not report the charges against the prisoners. They clashed with protesters from the Far Right São Paulo group Direita São Paulo who, last night, protested on Avenida Paulista against the law that favors the regularization of foreigners in Brazil.

In pages of pro and anti-law groups on social networks, representatives accuse each other of the confrontation. Right-wing militants say they were targeted for a “terrorist attack” because a homemade bomb was allegedly launched by an immigrant.

In a recorded video  they say there is evidence that one of the prisoners released the explosive. Counter-demonstrators allege they were physically assaulted and only reacted.