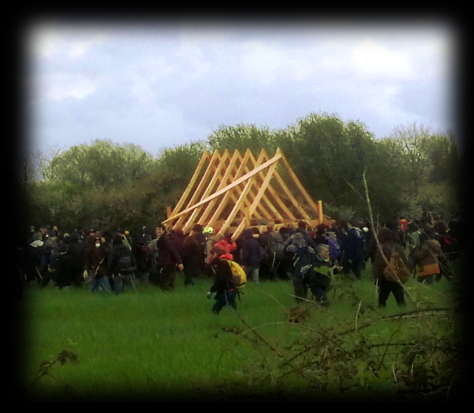 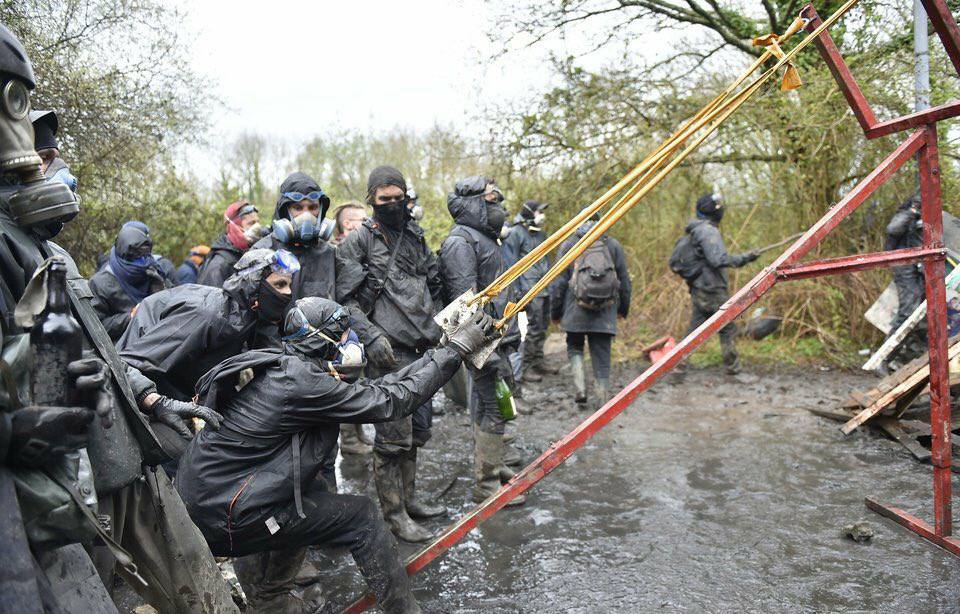 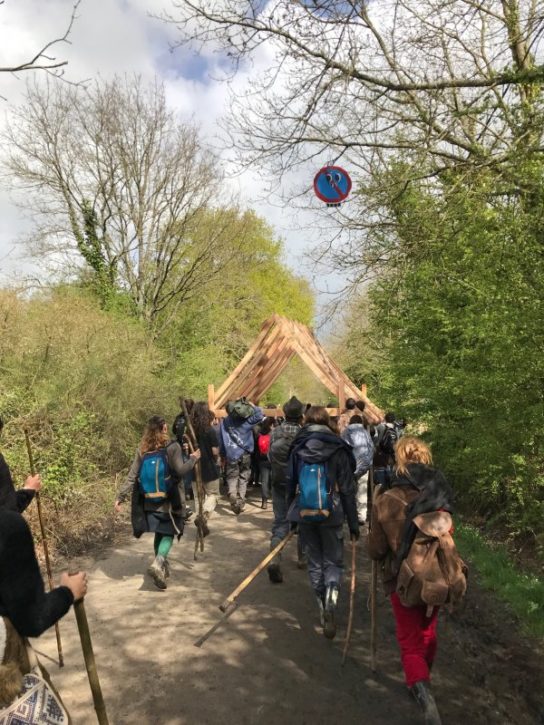 REPORT OF WHAT HAS BEEN HAPPENING HERE THIS SUNDAY 15 APRIL. or THE MAGIC OF THE ZAD!   from   contra info

Despite the state of siege imposed by the government, a crowd of 15,000 to 20,000 people has succeeded, whatever the cost, in reaching different points of the ZAD this Sunday. This afternoon new groups are arriving all the time. 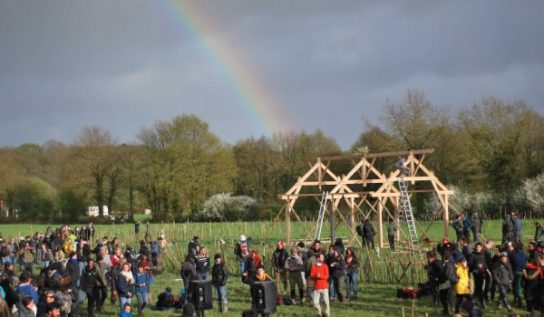 ★Ⓐntiespecista★‏ @VAnarquia 9h9 hours ago   in Brussels, the Permanent Representation of France to the European Union was attacked in solidarity with the #ZAD #ZADResist #NDDL

Since this morning, the state has done everything possible to break this huge surge of solidarity: there are road blocks and checkpoints everywhere; police checkpoint policeman at the exit lanes of the motorways, asking drivers not to to try to go to the solidarity gathering. 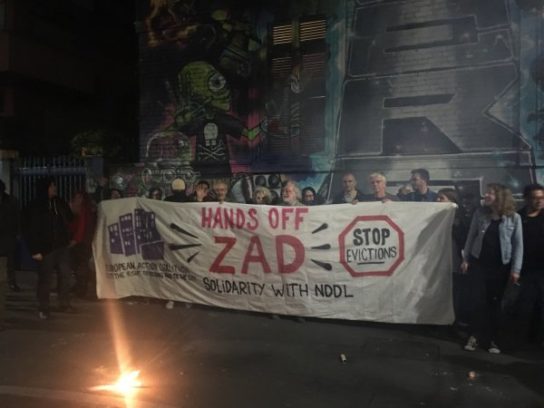 This is the first time that the state has tried to prevent a big demonstration of this kind on the ZAD, and to wind up the tension. But here the collective spirit has not allowed itself to be intimidated by any such thing: the ZAD’s supporters know the country paths, and the fields, and they have been moving in groups in order to get round the police blockades.   Antifeixista and 2 others Retweeted
The movement that succed in forcing the abandonment of the airport project is here again today, in all its strength and diversity, to defend the ZAD. 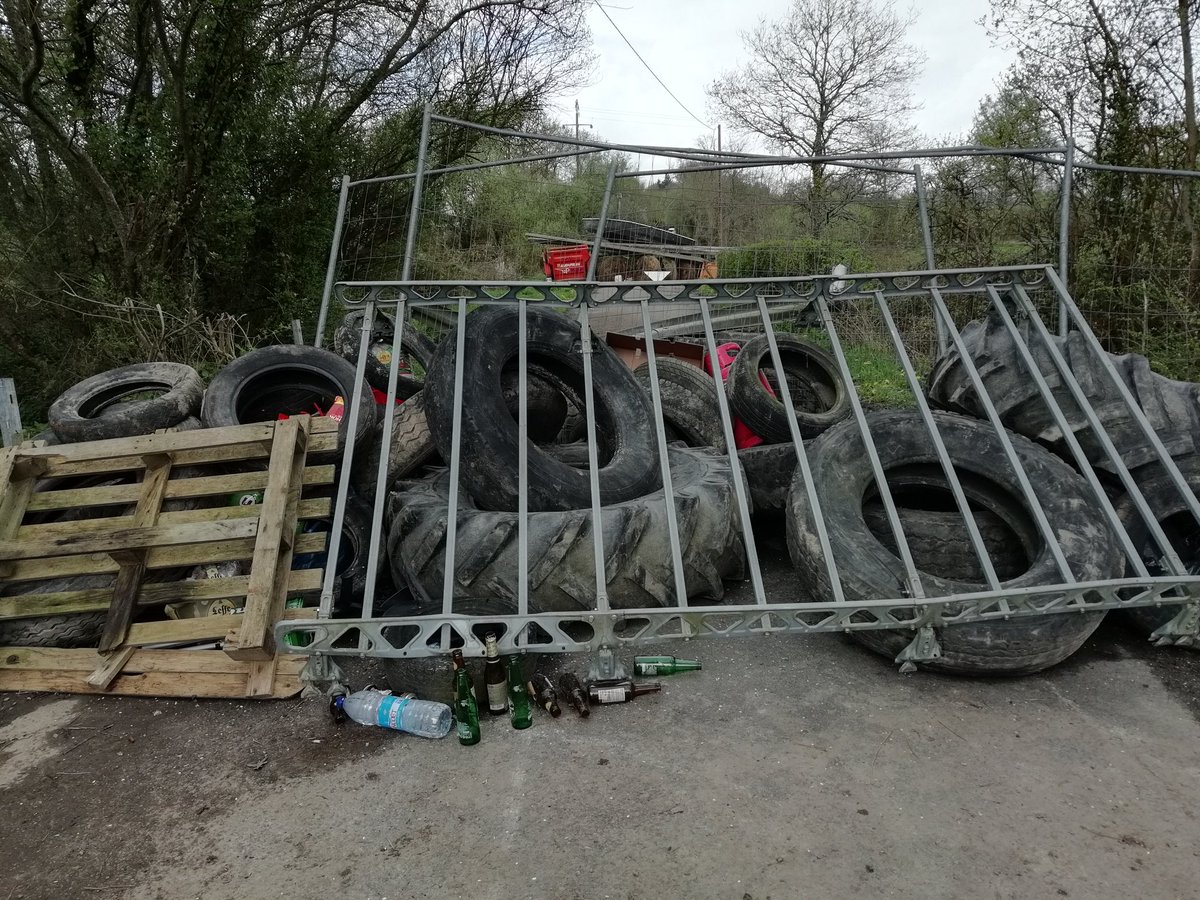 At 2.00pm there was a solemn moment at the Bellevue Farm. The thousands of sticks and clubs (batons) planted on the 8th of October 2016 were dug up from the ground. We had made a solemn promise to come and collect them if ever the ZAD came under renewed attack. That time has now come!

Call for an emergency demonstration in solidarity with the #ZAD, Wednesday, April 18th, 5 PM, in #SanFrancisco. https://itsgoingdown.org/san-francisco-call-for-solidarity-demo-with-la-zad/ …

0 replies 16 retweets 21 likes
People of all ages have set off along Le Chemin de Suez, escorting a large wooden framethat is being carried by a convoy of tractors. This beautiful construction has been created this week with timber from the ZAD, under the Hangar de l’Avenir [the ’Barn of the Future’] by dozens of carpenters.

Hambacher Forst‏ @HambiBleibt 13h13 hours ago      In 1 week of defense of #ZAD in #Britany #Zadistes have come under a #militarized #police attack that used 2 tons or #CS #TearGas cartriges, grenades & #RubberBullets. #Degrowth is not going to happen if #Climate #Disasterism fuels more #Repression not solutions. #ClimateJustice 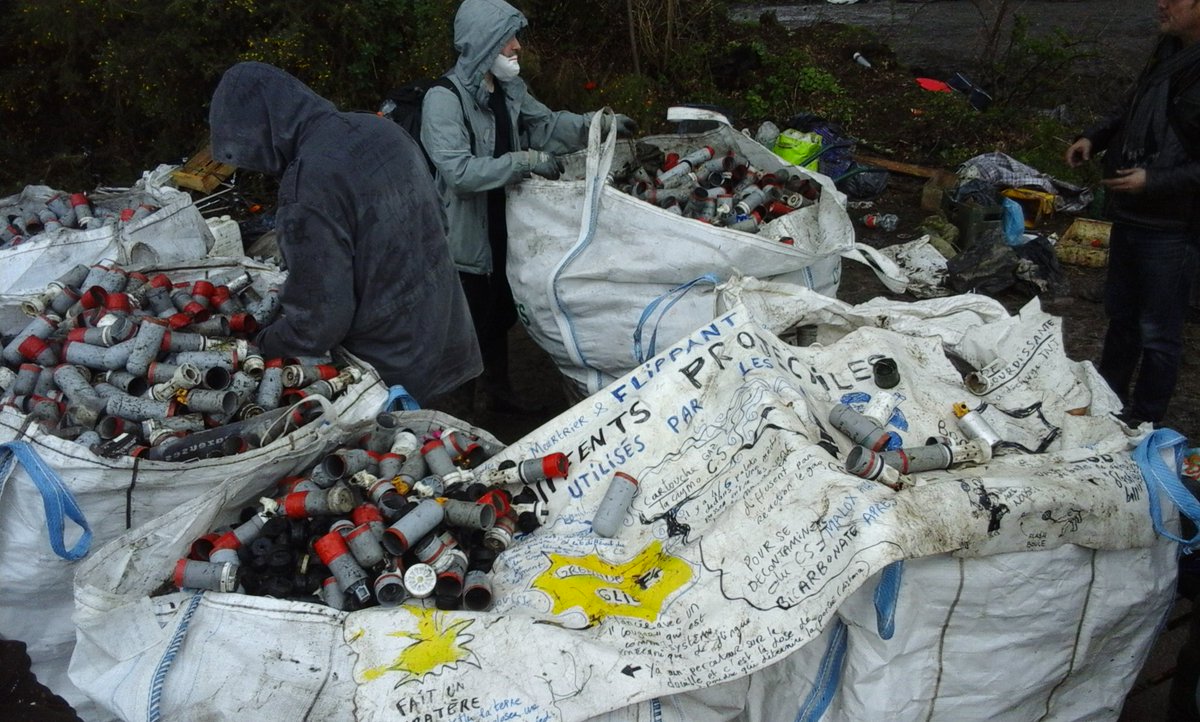 0 replies 30 retweets 21 likes
For the moment it is mounted on the field of the Wardine, with a view to moving it later. Hundreds of people are carry pieces of wooden constructions by hand. It was on this same field in 2012, at the time of the Demonstration of Re-occupation, that human chains had carried masses of materials to build a village at La Chataigne [the ’Chestnut Tree’].

15MBcn_int‏ @15MBcn_int 10h10 hours ago   Ongoing resistance at #ZAD: an historical model based on federated communes is being used as police lab by Macron http://bit.ly/1Q968TA 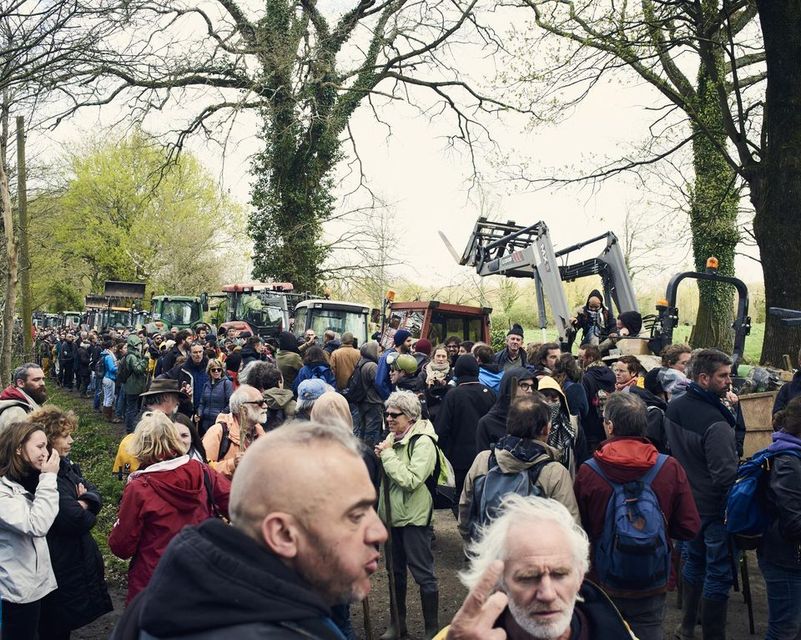 1 reply 19 retweets 20 likes
Today, hundreds of sticks and clubs were immediately planted around construction site to protect this new building, a market hall and meeting space which was initially planned to be brought directly to the Gourbi to replaced the communal area that was destroyed [by the police] last Thursday. 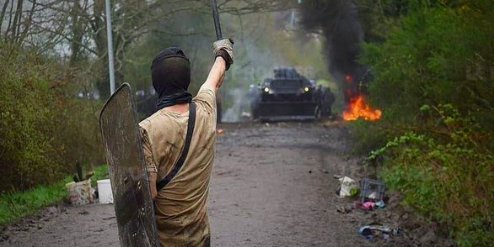 Meanwhile other large groups of demonstrators, with batons in hand, have spilled over from all sides of the police operation on the D81 road, and have crossed the road to pass to the east, into the forbidden zone, which has been occupied since this morning by columns of gendarmes. 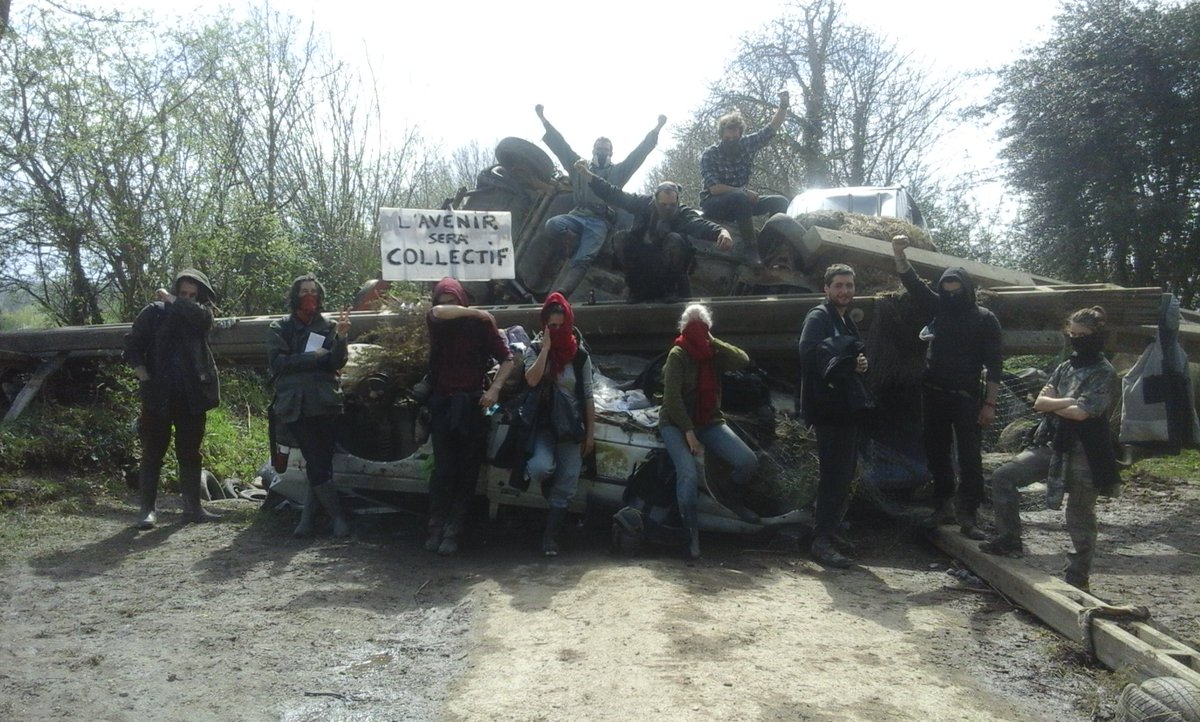 A mobile construction has been carried across the fields. Meanwhile more than a hundred people have been kettled since since this morning at the La Grée farm. Supporters are trying to reach them. We are informed that the Prefect [local representative of the state] has arrived at the Saulce crossroads.

Ithaca InfoShop‏ @IthacaInfoShop Apr 14       For ZAD, with love and solidarity from Ithaca Food Not Bombs and Ithaca InfoShop. @ #NDDL #ZAD

After yesterday’s solid demonstration of more than 10,000 people in Nantes, involving trade unionists, students and supporters of the ZAD, she will once again be able to see with her own eyes that nobody can crush our collective desire by the use of terror and destruction!

ZAD partout‏ @ZAD_PARTOUT 13h13 hours ago         RT ZAD_NDDL “RT th1an1: During protest against gold mining in #Skouries, in northern #Greece‘s Halkidiki peninsula, this morning. Residents and activists fight to protect the forest and environment from the destructive greed of corporations and State… ”

0 replies 4 retweets 7 likes
Especially because this weekend solidarity actions are continuing in many cities in France and around the world.

The ZAD has been wounded, but it is always magical!