note: this blog thefreeonline.wordpress.com, has now been banned in Turkey and for computers with Turkish origin. see report here:

Many posts have been written saying the awful Syrian war will end when the Idlib enclave finally falls to Assad’s Syrian army.

Wishful thinking perhaps. Turkey has set up 12 bases in Idlib and is busy recruiting the various militias, offering them 500 Turkish Lira a month when their wages from various foreign backers have largely been cut off. Those that refuse will be isolated, divided and broken down, at least that’s the plan. Erdogan the Turkish leader has repeatedly vowed to conquer all the original Ottoman Empire, which includes all of Northern Syria and Iraq, and has already invaded Afrin with a bloodbath, as well as Jarablus, Azaz, Al Bab, etc (see map below)  and now Idlib.

Next step will surely be to use his swelling army of Arab mercenaries to attack all Rojava, destroy the democratic and feminist revolution and install the full scale genocidal Turkification programs.

Turkish dictator Recep Tayyip Erdogan issued another“final warning” that he will order another illegal invasion of Rojava in Syria on Friday 27th Oct 2018. Speaking to a group of provincial leaders of his AK Party in Ankara Erdogan said that “we will eliminate the threat to Turkey” . The Turkish president stated that the east of the Euphrates would be cleared of terrorists and “returned to its rightful owners,” i.e. The Ottoman Empire, with Turkish paid FSA terrorists, many ex-ISIS, taking back Raqqa, etc. from the Councils promoted by the democratic and secular SDF.

Now it is becoming possible that Assad may go along with Erdogan’s next invasion, allowing the neo fascist Turkish regime indulge in genocide in common hatred of the Kurds, as he already did in Afrin.

The Kurds have rejected separatism and argue for a federal solution, they have taken over a third of Syria, setting up progressive and inclusive infrastructures of all kinds, as well as a new force, the SDF ,a fast expanding multi ethnic, multi religion, anti sexist, non authoritarian federation, which includes women and dozens of groups of all religions and races.

Now Walid al-Muallem, Foreign Minister of Assad, has announced that federalism can not be an exit to the demands of the Kurdish minority.

Reason? The Constitution, sacred book written by the Arab majority, does not allow it. The Syrian constitution, a text written by and for Arab nationalists which does not recognize minorities, rights or respect the difference. The same text that imposes that only a Muslim can be Syrian President.

Syrian President Bashar al-Assad has condemned as “traitors” Kurds ”allied with the United States” in the north of the country.

End of the debate, End of respect. End of dialogue. Initiation, then, of imperialism, of Arab supremacism, of contempt for the minority and, after all, of its subjugation.

Paraphrasing Miquel Iceta, who on the same day warned the Catalan minority to ”learn from the past”, in commemoration of the execution by the central State of their President Lluís Companys, Muallem affirmed the agency of the regime, Sana (Arab Syrian news agency) that the Kurds “Have to learn from the lessons of the past. The Syrian decree is to extend its sovereignty over the Kurdish region.”

Either obey or we will crush you.

The Kurdish defense forces, the YPG and YPJ, continue  resisting in Turkish occupied Afrin against a huge NATO equipped modern army, thousands of  FSA mercenaries recruited from ex ISIS and Jihadist arab militias, and an extensive colonisation and Turkification program .

Fighters from the Jaysh al-Izza (the Army of Glory), affiliated with the Turkish-backed Free Syrian Army, FSA,  in a training session, Idlib, Syria, April 9, 2018.

The SDF fighting ISIS get equipped by the US, but it’s clear after they turned a blind eye to the Afrin invasion that the Americans will not back them against Assad, Erdogan and the Russians . Nor do the Kurdish led progressives wish to be used by the imperial US invaders, although they have no other backers except brave internationalist volunteers. 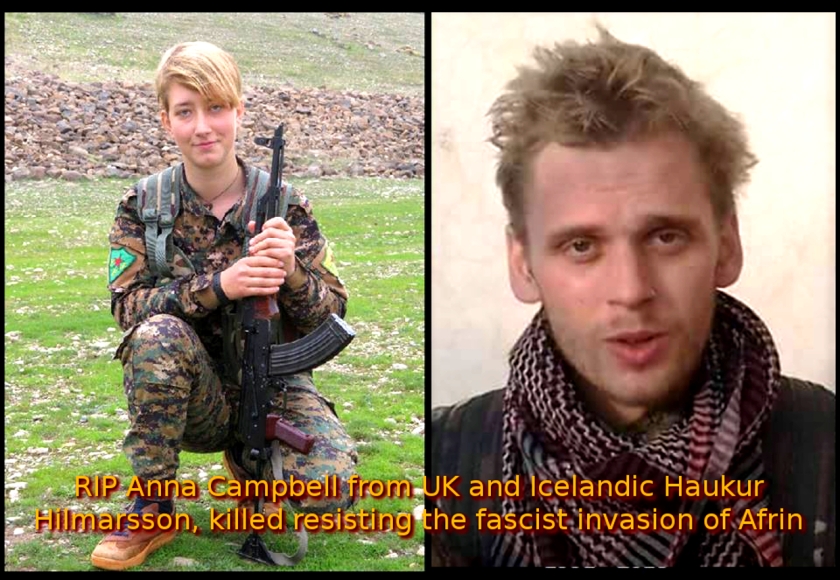 Erdogan ordered the illegal and genocidal invasion and Turkification of Afrin, killing, looting and exiling half the population. And murdering our comrades there to defend the democratic revolution, including Anna and Haukur , see photo above.

Foreign volunteers also joined the SDF and many have died resisting ISIS jihadist terrorists or directly by their Turkish sponsor.

Only Russia could force a solution, but Putin has shown clearly that they are willing to  let Erdogan have his evil genocidal way: the Turks and their mercenaries could only take over Afrin with massive  bombing by their NATO equipped airforce. They could only do that with express permission from the Russians who control the air space. (see.. #Putin is powerless to defend Syria against #Turkey because it needs the #Bosphorus and #Turkstream)

In return Erdogan has promised to buy the latest Russian air defense system and allow the Turkstream 2 pipeline to supply Russian gas to Europe, etc.

Still, Russia did force Erdogan to back down before in 2015, when he downed a Russian plane in Syria, and there is some hope that clever Putin could force a solution, perhaps with collaboration of a future new and less insane US government.

It’s well known, despite Turkish cover ups, how Turkey historically massacres and oppresses its minority communities, especially the Kurds. But in Syria too the Kurdish minority were effectively disappeared, this time by the Arab state. (see also.. Nusaybin surrenders after 74 days ..in total ruins and deafening silence)

”56 years ago, the Syrian Arab supremacist government excluded the Kurdish minority from any civil rights. This norm, approved on October 23, 1962, excluded Kurds from Syrian society.

To achieve this a census was made which determined that there were 120,000 Kurds in Syria representing one-fifth of the population and divided them into two groups:

– Ajanib, meaning “foreign” Arabic, was Syrian people of Kurdish ethnicity who could not prove they had lived in Syria before 1945. They were considered “foreigners” or “unregistered”. They participated in the census but this served to revoke their citizenship.

– Maktumin, in Arabic “hidden”, were those who did not even participate in the census and, therefore, could not subsequently prove that they were in Syria in 1962. They simply ceased to exist. Therefore they did not have any right: neither education, nor to work, nor to have properties nor to marry legally.

In practice it was difficult to prove with documents that one lived in Syria before 1945 so that the immense part of Syrian Kurds became Ajanib or Makmutin.

The origin of the important Kurdish community in these cities is precisely this dispossession. Nowadays, the Kurds make up the majority in two districts of the center of Aleppo, Ashrafiyeh and Sheikh Maqsoud, and are 9% of the city of Jasmine, mainly in the neighborhoods of Rukneddin, Hay Al Akrad and Zorova. While the former have preserved their language, in Damascus most Kurds are currently Arabic speakers.

The third step, legislated in 1967 was, as in Turkey,  to prohibit any mention of the Kurds in textbooks. Even the names of persons or place names in the Kurdish language were prohibited, imposing Arabic at all levels. In this way, the ethnic minority was totally oppressed and its integration in the Arab magma was intended.

see also   PDF]Persecution and Discrimination against Kurdish Citizens in Syria

translated from KurdisCat.. shared with thanks.