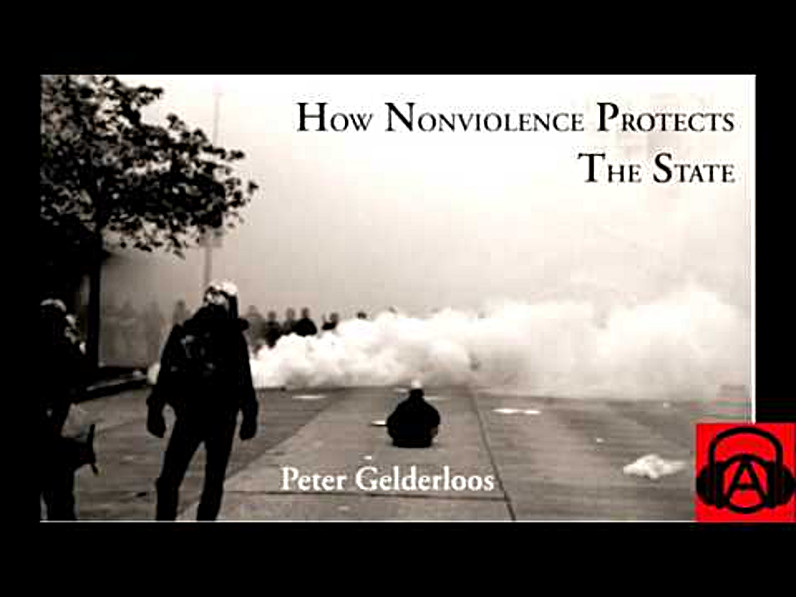 Violence Is Sometimes the Answer

“I want to make it clear, however, although I am deeply opposed to war, I am not advocating appeasement. It is often necessary to take a strong stand to counter unjust aggression. For instance, it is plain to all of us that the Second World War was entirely justified. It “saved civilization” from the tyranny of Nazi Germany, as Winston Churchill so aptly put it.

But we can only judge whether or not a conflict was vindicated on moral grounds with hindsight. For example, we can now see during the Cold War, the principle of nuclear deterrence had a certain value. Nevertheless, it is very difficult to assess such matters with any degree of accuracy. War is violence and violence is unpredictable. Therefore, it is better to avoid it if possible, and never to presume we know beforehand whether the outcome of a particular war will be beneficial or not.”

Protesters get slammed by critics whenever they use force. But for the state, it’s normalized.

Whenever protesters fight with police, burn vehicles, or smash windows, a familiar chorus rings out, from a safe distance: Why can’t they be nonviolent, like Mohandas Gandhi, Nelson Mandela, or Martin Luther King Jr.?

With anti-government protests raging around the world since the summer, this common refrain returns. Even United Nations Secretary-General António Guterres, while reminding governments to allow free assembly and expression, said protesters must “follow the examples of Gandhi, Martin Luther King Jr., and other champions of nonviolent change.”

This creates a double standard: Protesters are expected to remain nonviolent, even in the face of attacks by powerful, heavily armed governments. Yet no matter what protesters do, governments always portray them as “thugs” or “criminals” to legitimize violent crackdowns, as in Iran in recent weeks. The FBI accused King himself of inciting violence.

Government security forces are considered restrained if they use rubber bullets, tear gas, and other such weapons termed “nonlethal,” instead of live ammunition. But protesters are labeled and condemned as violent as soon as the first rock flies, justifying even harsher state repression. The violence of the state is normalized—and even excused—by those who claim to decry violence of all stripes. Even careful use of force by protesters, however, such as targeted property destruction or direct resistance to police brutality, becomes an excuse to condemn the whole movement.

Like most of us, I endorse nonviolence as an ideal. In the face of repression by pro-government forces, though, this ideal may be untenable. One can oppose aggressive violence but recognize that violence in self-defense or responding to attacks is justified. Even when a cause seems hopeless, fighting back may give protesters a sense of agency and self-worth, rather than suffering in the hope of a hypothetical change in the future—a future they might not live to see.

Calls for nonviolence often come from residents of Western democracies, where the scope of domestic state violence is relatively limited or restricted to targeting particular minorities, including black Americans and people of Middle Eastern and African descent in France, and where protests tend to be augmented by secure access to the courts and ballot box.

Yet globally, protest movements willing to use violence are sometimes more effective in achieving regime change or democratization. Many cases celebrated as successes by nonviolent resistance advocates, such as Egypt’s Arab Spring protests and Ukraine’s Maidan movement, were actually accompanied by significant strategic anti-police violence that led security forces to desert or abandon the regime.

Even in democratic states, force can be useful. In Chile, protesters’ willingness to fight with police and burn buildings, in addition to nonviolent tactics, helped push the government to make serious concessions. And while many Bolivians are understandably angry with the subsequent right-wing and military takeover, protester violence pushed President Evo Morales to step down amid unhappiness with his ignoring the results of a referendum and allegations of electoral fraud.

Calling for protesters to always remain nonviolent winds up normalizing further state violence as an acceptable response when protesters hit back. Even if protesters only resort to violence after attacks by security forces, it is painted as “both sides” being violent in “clashes,” despite inequalities in firepower or protesters condemning violence within their ranks. The burden is placed on protesters to sacrifice themselves in the name of nonviolence, rather than putting the onus on better-armed and trained security forces to maintain their own nonviolent discipline. When even security forces in liberal democracies such as France use disproportionate violence against protesters, it is crucial not to deflect responsibility from state actors, who are usually more organized and far more militarily powerful than protesters.

Preaching nonviolent resistance from the outside presumes to know more than protesters about their situation and what the best strategy is.

Demonstrators are not blind to the forces arrayed against them. In Hong Kong, protesters are well aware of China’s 1989 crackdown in Tiananmen Square, but they also know the freedoms at risk of disappearing. In the words of a Tiananmen veteran now in Hong Kong, “They are ready to burn together if it burns.” Hong Kongers have referenced the surveillance and mass detention of Uighurs in Xinjiang: They know what the Chinese state is capable of, and many believe that unless they fight back, including violently, their rights will be trampled.

It is impossible to know at the outset of a movement whether or not nonviolent resistance will be a successful strategy. Nonviolent activists are often mentally prepared and trained to face state violence, yet as repression escalates, it is natural for protesters to question the efficacy of nonviolence and whether they should fight back. Protesters in Hong Kong have grown increasingly violent only after a brutal police crackdown, driving some of them to pick up rocks, rods, and Molotov cocktails, with one protester arguing, “We can’t just be sitting ducks anymore.”

On the ground, it is healthy for people within a movement to discuss and argueabout whether nonviolent or violent resistance tactics will best serve the movement’s goals. For those on the outside, who are we to tell protesters how long they should accept beatings or seeing their friends killed before they turn violence back on their repressors?

“The basis of these problems in seeing others in terms of ‘us’ and ‘them’.”
~ Tenzin Gyatso 14th Dalai Lama Non-Violence and Resistance

The icons of nonviolent resistance were often less strictly opposed to violence than commonly believed, however convenient it is for people to cite Gandhi and King as their heroes. Henry David Thoreau, the author of the pamphlet Civil Disobedience, spent plenty of time and ink advocating for John Brown, the abolitionist who violently opposed slavery in Kansas and sought to start an uprising of enslaved people in Virginia.

Gandhi, like Thoreau, was personally committed to nonviolence and thought it was the most moral strategy, but he recognized not everyone was willing to risk the same self-sacrifice as him. And if you weren’t willing to die resisting nonviolently, Gandhi thought it was better to undertake violent resistance in self-defense than to be a coward.

Martin Luther King Jr. had guns and endorsed violence for self-defense. Nelson Mandela was an insurgent and advocate of violent struggle before he became a symbol of nonviolent resistance. The threat of violence in South Africa was crucial in pushing the apartheid regime to compromise, despite conservative critics wishing Mandela were more like King and Gandhi.

But many movements have a mix of nonviolent mass protests and more violent, radical flanks that engage in unarmed collective violence with sticks, stones, fists, or Molotov cocktails. As Chenoweth and co-authors recently acknowledged, evidence on the effects of radical flanks is mixed. Sometimes violence by protesters may backfire and alienate the public, but other times, when the government is viewed as illegitimate or corrupt and protesters as justified, it may have no effect or even bolster support for protesters’ cause. In more authoritarian settings, it may not be possible to stage a sustained protest without some degree of violent resistance to security forces, who would otherwise sweep protesters off the streets.

Even when statistical studies are based on good data and find that nonviolent resistance is more effective, that broad principle cannot apply to all situations. Without deep knowledge of a particular political and social context, it is irresponsible to tell protesters that nonviolence will be more effective. That’s an ethical argument, not an evidentiary one.

In a perfect world, protesters—and governments—would not resort to violence. But if anti-authoritarian protesters feel they have no other way out from under a violent, repressive government, then solidarity and pressure on the government, not moralizing, is the best way to support the movement.

The Failure of Nonviolence (Chapters 1-4) | The Anarchist Library

https://theanarchistlibrary.org/library/peter-gelderloos-the-failure-of-nonviolenceTheFailureofNonviolence examines most of the major social upheavals since the end of the Cold War to establish what nonviolence can accomplish, and what a diverse, unruly, non-pacified movement can accomplish. Focusing especially on the Arab Spring, Occupy, and the recent social upheavals in Europe, this book discusses how movements for …