Dec 19, 22 by Anonymous Contributor at itsgoingdown.org via thefreeonline shared with thanks 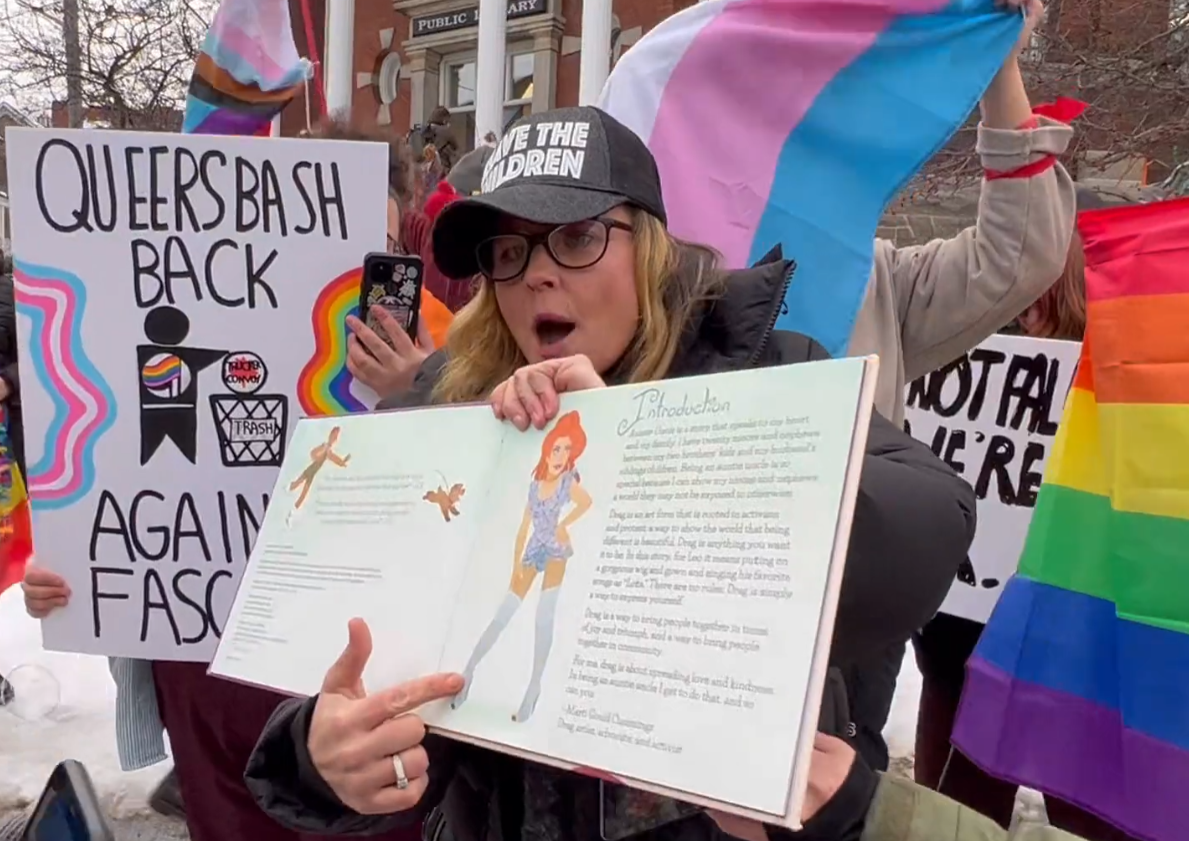 Report back from community defense of a drag story-hour in so-called Brockville, Ontario. Originally posted to Gay Mafia Protection Racket.

Like the world’s worst game of whack-a-mole, we were out again yesterday, December 17, in Brockville, Ontario to protect a drag story hour at their local library. And once again, we outnumbered them from the start, successfully keeping them out of the event and away from LGBTQ+ kids.

Library staff were happy to see us when we arrived ahead of time and set up our equipment and supplies on their lawn. That meant that for once, we didn’t have to worry about washroom access or trespass charges. When the other side’s cars, flying Canadian flags, finally arrived, they circled the block over and over again before getting out. It was obvious that they hadn’t expected such an outpouring of community support. At their peak, the fash had at very most 20, while we had several times that — something like 60 to 80 people. They went between the sidewalk and street in front of the library, and the other sidewalk across the road.

Once again, while some crews joined from Ottawa and other neighboring cities, the heart of our side was in the small-town community members themselves. Echoing some of our reflections from last time, one local commented (about the convoy creeps) that they were sick of these out-of-towners coming here to tell them what to do. As one staff member said to a news station, for every protestor they get, the library resolves to hold another drag storytime.

Everyone’s favorite Andy Ngo-wannabe landlord lawyer made an appearance, but some flag- and banner-bearing friends forced them to mostly keep their distance. Banners, flags, umbrellas, and signs are some of the best ways to block bad actors from filming.

A big, solid banner in the hands of just two or three practiced anti-fascists can physically control a good amount of space by limiting where their side can wander. If you’re short on hands, a pride flag lets you do the same on your own. Having people with both might give you a nice, strong line to hold down and the maneuverability to chase down fash who manage to skirt around it.

We also want to give a special shout-out to the baby black hole that some people brought with them. Theirs was a large black fabric held up between two tall, lightweight metal poles, smaller but inspired by the original that Pride Defenders in Hamilton used in 2019. The height means that livestreamers can’t just stick their phones over top, and your arms won’t get sore when you’re stuck covering a group of chuds for way too long.

A sound system, bubble wands, and a treasure trove of squeaky dog toys added to the atmosphere. Those Dollarama toys were a great, cheap way to make lots of noise whenever cameras came around.

There were only a handful of visible cops, maybe three in the middle of the street and another two by the library entrance. For the most part, they stood around chatting with chuds and liberals and occasionally escorting a few of the first category across the road. Maybe once or twice, they stepped in when things began to get heated, but any real escalation broke up pretty quickly.

We want to remind folks here that even if they’re not attacking us this time, cops are never our friends. Never fall for their pinkwashing PR and believe that these ones could be the good ones. All of us in Ottawa saw exactly whose side they’re on when they spent weeks being buddy-buddy with the occupiers that terrorized our streets in January and February.

Brockville also shows how respecting a diversity of tactics and making room for everyone who shares our general values can help us win. The crowd was a mix of people with different orientations towards confrontation. Rad folks got up close and personal to drive out the protestors, with liberals or more risk-averse folks positioned closer to the back, taking up important space and helping make noise.

By and large, we didn’t have to deal with peace police on “our side” demanding we back off. In the same vein, there’s a place for all of our friends to show up — you don’t have to be willing to throw down yourself to be there for your community.

Caryma Sa’d is now whining on Twitter about being rejected, trying to dox the people who didn’t want her putting them in danger. Regardless of how militant or peaceful you are, if they can get their hands on your name and other information, our opponents will try to ruin your life.

Unfortunately, Ottawa and the surrounding area doesn’t really see bloc tactics. In the alternative, there are still lots of ways you can make yourself harder to pick out of a crowd. Wearing an N95 means you can protect your identity and your health at the same time. Consider tucking your hair into a hat or hood, especially if it’s brightly colored or otherwise notable. Look out for distinctive items of clothing or identifiers like logos that could be a problem.

We said this last time, but it’s worth the reminder. There’s no strategic reason to talk to fascists at events like this — you’re not going to convince them, but they are going to get footage to use against you. If someone approaches you with a phone or camera and starts interviewing you, they’re probably not just there to hear you out.

On security culture, with more links there