By Don Gross     On Feb. 1, Amazon reported its highest ever quarterly profit, bringing in $1.9 billion in profit in the fourth quarter of 2017. The news came a day after it was reported that Amazon had patented wristbands that would track warehouse workers’ movements while they were on the job. 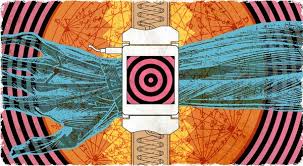 The stunning contrast between these two stories reinforces the fact that Amazon’s massive profits are created by the work of mostly low-paid warehouse workers and delivery drivers who work under slave-like conditions.

Amazon’s quarterly report revealed that the company made $1 billion more than over the same period in 2016. Of that $1.9 billion profit, $789 million was because of the tax “reforms” passed last year.

The report also showed that Amazon hired almost 130,000 more employees around the world in 2017, which brought the company’s total workforce to 566,000 people. That number excludes contractors that make up a large share of Amazon’s workforce. These workers are the reason for Amazon’s wealth, not the supposed genius of CEO Jeff Bezos.

Amazon’s patent for a wristband that will track workers’ movements garnered attention because of the company’s history of abusive labor practices and the creepiness of the concept. The wristbands have a variety of potential uses, for example, vibrating if a worker is about to put an item in a wrong bin or tracking workers’ job performance. Much of the commentary about the wristband focused on how it can be used to control workers.

Amazon promotes the device as a way to cut down on time consuming acts like scanning or checking computer screens, and dismisses concerns about the wristbands being used for control. Even if Amazon’s statement is taken at its word, under capitalism, labor saving technology is rarely developed for the benefit of the workers using it. 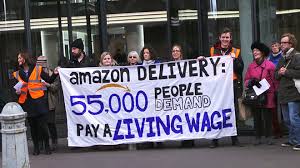 The time warehouse workers previously spent looking at screens will be spent doing other more profitable tasks. If the technology is successful enough for Amazon, then warehouse workers may be laid off as there is not enough work for them. It is well documented how Amazon already closely tracks employees and limits breaks.

However, Amazon is correct in stating that most companies do these things. What makes Amazon unique is how ruthlessly it pursues increased efficiency at the expense of its workers. This ruthlessness is rewarded by capitalism and has enriched people like Jeff Bezos…… 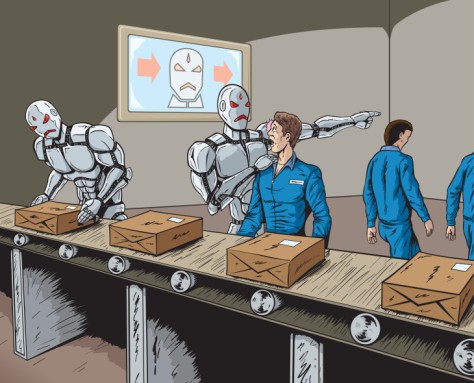 From implants with microchips to wristbands with trackers and sensors that detect fatigue and depression, new technologies allow employers to monitor their workers more and more intensively

“As this surveillance can be done retrospectively to fire people, it is used to make them feel that they could lose their job at any time,” says a sociologist who worked as a telemarketer

by Emine Saner     A US company implanted microchips to dozens of workers last year. In that ‘party of the chip’ that was news around the world, employees queued to be placed between the thumb and forefinger a device the size of a grain of rice under the skin.

When Todd Westby, CEO of Three Square Market, came up with the idea, he thought that only five or six people would volunteer: he, two or three directors and some of the IT department employees. But of the ninety people who work at Three Square Market headquarters, 72 now have the chip (Westby has one in each hand). They use them to open security doors, connect to computers and make payments at the company’s vending machines.

The microchips have other uses. Three Square Market (which sells vending machines and kiosks) began two months ago to put them on people with dementia in Puerto Rico. If someone gets lost and the police find it, they can scan their microchip “and have access to all of their medical history, to the medicines they can and can not take, to their identity.” So far, the company has microchipped a hundred people, but plans to do it with ten thousand.

The company has just launched an application for mobile phones that matches the chip with the phone’s GPS and tracks the person’s location. Last week they started using it with people on probation, instead of the electronic anklets that Westby describes as “intimidating and degrading.”

Can you imagine that one day the company could use GPS to track its employees with the implant? “No. There’s no reason to do it,” Westby replies.

Not all companies agree. Technologists are devising increasingly strange and intrusive forms of personnel control. Last week The Times reported that some Chinese companies are wearing helmets and hats with sensors to scan the brain waves of their workers and detect fatigue, stress and even emotions such as anger.

The article also spoke of an electric company that decided the number and duration of breaks of workers based on their brain waves. The technology is being used on high-speed train drivers to “detect burnout and loss of attention.”

Although there may be legitimate security applications (a similar project was carried out with the bracelets to detect fatigue of Crossrail workers), it is easy to imagine how this type of technology infiltrates other areas.

In February it became known that Amazon had patented a bracelet that not only tracks the location of workers inside the warehouse while collecting items, but can also read the movements of their hands, buzzing or emitting a pulse to alert them when they are making mistakes.  Similar devices can also measure the number of keys pressed per minute.

In the patent registry, Amazon describes it as a device capable of “monitoring the performance of the placement of inventory items in the storage location identified by the inventory system worker.”

There are technology companies selling products that take screenshots of employees’ work at regular intervals, control their keystrokes and web usage, and even photograph them on their tables with the computer’s webcam.

Working from home is no protection against that surveillance because it can be done remotely. The software can monitor the use of social networks, analyze the language or install on employees’ phones to monitor encrypted applications such as WhatsApp.

Employees can carry devices that not only track their location, but also follow their tone of voice, the frequency with which they speak at meetings, with whom and during what time.

One thought on “Smart Wristbands and Chips under your skin. STOP Worker Control !”