Murray Bookchin-The Next Revolution.   Popular Assemblies and the Promise of Direct Democracy-(2015).pdf

What Is Social Ecology   by Murray Bookchin   pdf

[PDF]The Rojava Revolution ANARCHISM IN THE MIDDLE EAST by the work of Murray Bookchin.
What we see in Rojava today is anarchism in practice. Each Canton subscribes to a constitution that affirms a society free from…..

Activist and prolific writer Janet Biehl has famously taken up the theory and practice of Municipal Anarchism, as theorized by her companion Murray Bookchin…..

from autonomies.org/ shared with thanks        The ongoing uprisings and revolution in Rojava and parts of Turkey are largely modelled on the ‘municipal anarchist’ blueprint of Murray Bookchin, whose works had been neglected and often rejected, even by anarchists as being a ‘sellout’ or ‘anti worker’ etc.

For decades the PKK marxist Kurdish guerillas had been resisting on behalf of the heavily repressed and ‘disappeared’ 18 million kurds in SE Turkey. Now they adopted municipal anarchism, dropped the demand for a new state and called a lasting ceasefire.

While Ocalan and others negotiated an exciting ‘Kurdish Spring’ began in Turkey, resembling an anarcha-feminist social revolution. But when Kurdish led parties won many seats in the 2015 elections the budding dictator Erdogan attacked the Kurds to gain votes and when the PKK was forced to respond launched an all out military campaign against the ‘Kurdish Spring’.

For once it was an advantage to be scattered across borders, and many youths escaped south to join those in Rojava, northern Syria, and create the hugely progressive, multi racial, ecological and feminist Rojava Revolution, under the noses of the heavily armed Turkish, Syrian, US,Russian states and all their assorted jihadi militias.

In a series dedicated to anarcho-syndicalism, autonomies shares Murray Bookchin’s critical reflections on this tradition within anarchism, in the excellent essay, “The Ghost of Anarcho-Syndicalism”.

Whatever reservations we have regarding the direction of Bookchin’s anarchism towards a radically democratic municipalism, his emphasis on the communalist traditions of anarchism is of great importance, not only in reading the history of the anarchist movement, but also for critically engaging with the more recent “occupy movements” and the “anarchist” response to them. …

”Murray Bookchin was one of North America’s most important ecological voices. Active in the ecology movement for over thirty years, he authored more than a dozen books on urbanism, ecology, technology and philosophy.

Edited by Janet Biehl and described by Bookchin himself as the best introduction to his work The Murray Bookchin Reader spans five decades of writings essential to the ecological and political philosophies of the contemporary libertarian left.  ..Janet Biehl

Janet Biehl is the author of The Politics of Social Ecology (Black Rose Books) and Ecology or Catastrophe: The Life of Murray Bookchin (Oxford University Press). She lives in Burlington, Vermont.

“Murray Bookchin was irascible, human, brilliant, and above all relevant to our own time.”  — Gar Alperovitz. Professor of Political Economy at the University of Maryland 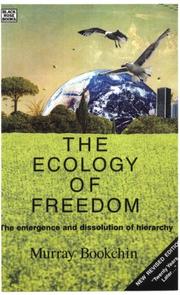 “Creative, charismatic, controversial and, many would add, more often than not a bit cantankerous, Murray Bookchin was without doubt one of the most significant thinkers of the last century.”  — David Harvey, CUNY Graduate Centre

”The Murray Bookchin Reader offers an overview of the thought of Murray Bookchin, today’s foremost social theorist and political philosopher of the libertarian left. Best known for introducing ecology as a concept relevant to radical political thought in the early 1960s,

Bookchin was the first to propose, in the body of ideas that he has called “social ecology“, that a liberatory society would also have to be an ecological one. His writings span five decades and a wide range of subject matter. Bookchin’s writings on revolutionary philosophy, politics and history are less known than the specific controversies that have surrounded him, but deserve possibly greater attention.

Despite his critical engagement with both Marxism and anarchism, his political philosophy, known as libertarian municipalism, draws on the best of both for the emancipatory tools to build a democratic libertarian alternative. Consistent throughout his work is a search for ways in which to replace today’s capitalist society with a more rational and humane alternative”.

Please visit the friendly community at /r/Communalists for further discussion.

PDF]The Rojava Revolution ANARCHISM IN THE MIDDLE EAST by the work of Murray Bookchin. What we see in Rojava today is anarchism in practice. Each Canton subscribes to a constitution that affirms a society free from…..

Why is the world ignoring the revolutionary Kurds in Syria?  The autonomous region of Rojava, as it exists today, is one of few bright spots … councils selected with careful ethnic balance (in each municipality, … part by the vision of social ecologist and anarchist Murray Bookchin, it has .,,

[PDF]1 Murray Bookchin, Communalism, and Rojava By Thomas Hanna The late Murray Bookchin was a lifelong American social revolutionary who had …. Bookchin, “Libertarian Municipalism: The New Municipal Agenda,” Anarchy …Murray Bookchin and the Kurdish resistance – ROAR Magazine  For years, Bookchin sought to convince anarchist groups in the US that his idea …. and notably by taking part in municipal elections — the power of the state …. The developments in Kurdistan — and especially in Rojava, the …

3 thoughts on “Murray Bookchin and the Rojava Revolution.. free downloads”