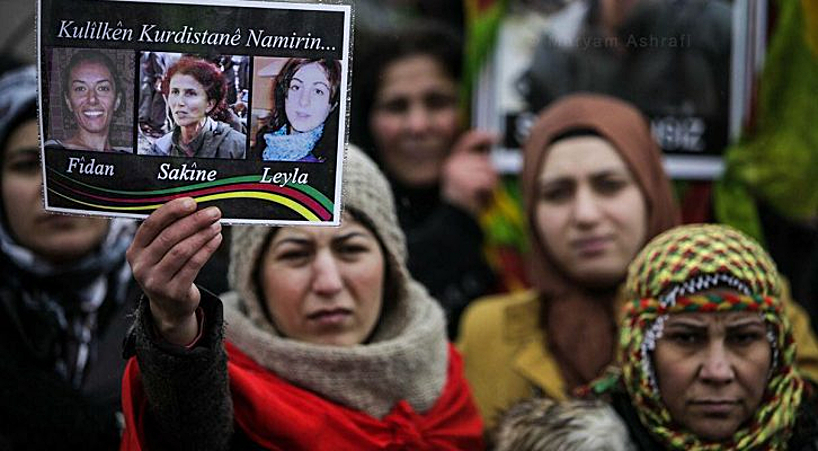 After the Syrian Kurds’ fight for Kobane against ISIS in 2014-5, many across the world were suddenly made aware of the Kurdish women’s movement in Rojava, northern Syria. But it was already flourishing across the border in SE Turkey, where women joined in taking up the ideas of imprisoned Ocalan and  intense cultural and political change to a horizontal anti authoritarian way of life was in full swing.

All this was suppressed in Turkey with Erdogan’s police and military crackdown in his bid to demonize the Kurds in a racist bid for dictatorial power. To his fury the revolution has continued and blossomed  in liberated Rojava, with echoes in Europe and beyond, despite Turkish support for ISIS and Al Qaeda, the economic blockade and the 750km long wall.

Here we republish a great interview on the birth, growth and suppression of the Feminist movement in Kurdish Turkey (Nth Kurdistan).

Interview with the Free Women’s Movement (TJA) in North Kurdistan

“Actually we have been calling our experience World War III. This is a war of destruction. The state does not call it a war, but this is the experience of those affected.”

After the Syrian Kurds’ fight for Kobane (a Kurdish city in northern Syria/Rojava) against ISIS in 2014-5, many across the world were suddenly made aware of the Kurdish women’s movement.

What has not reached us, however, is a much wider context that enabled the Kurdish women-fighters to confidently take up arms to defend themselves and their people. The unprecedented accomplishments of the Kurdish women predated Kobane and the war in Syria.

They are rooted in the evolution of Turkey’s Kurdish liberation movement, as it is represented by the Kurdistan Workers’ Party (PKK), and in the ideological shift of its leader, Abdullah Ocalan. 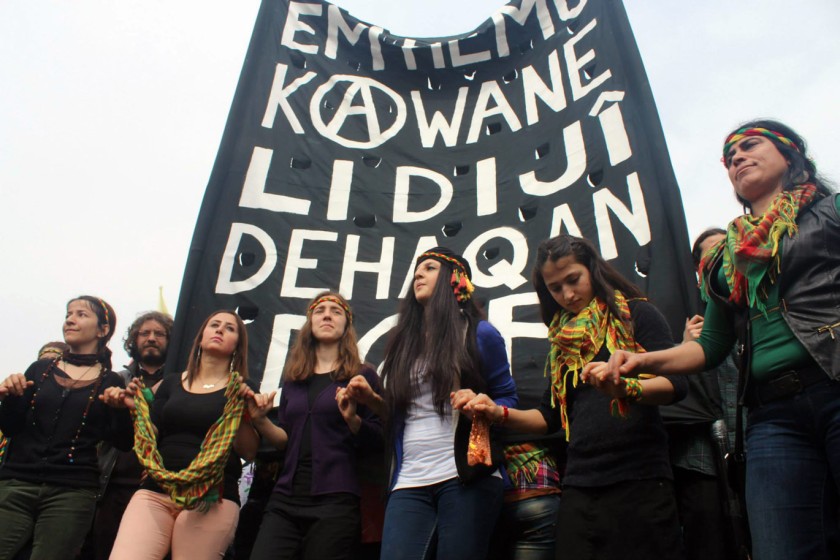 In what is regarded as a departure from the Marxist-Leninist perspective of national liberation, Ocalan developed a theory of democratic confederalism and democratic autonomy, making liberation of women into one of the central pillars of his struggle, alongside radical democracy and social ecology. The new ideology was first put into practice in Bakur (the Kurdish region in the southeast of Turkey) in the early 2000s and, despite continuing state oppression, the focus on and efforts towards women’s liberation within the movement brought visible results: a dramatic increase in women’s participation in the political and social life of the society, an evolution in their consciousness and the creation of various tools and spaces for their empowerment.

In Bakur, since the early 2000s, the Kurdish movement has been coordinating womens’ associations, women’s shelters, women’s local councils, cooperatives and academies, that have often functioned in cooperation with elected officials from the Kurdish parties in local government. END_OF_DOCUMENT_TOKEN_TO_BE_REPLACED 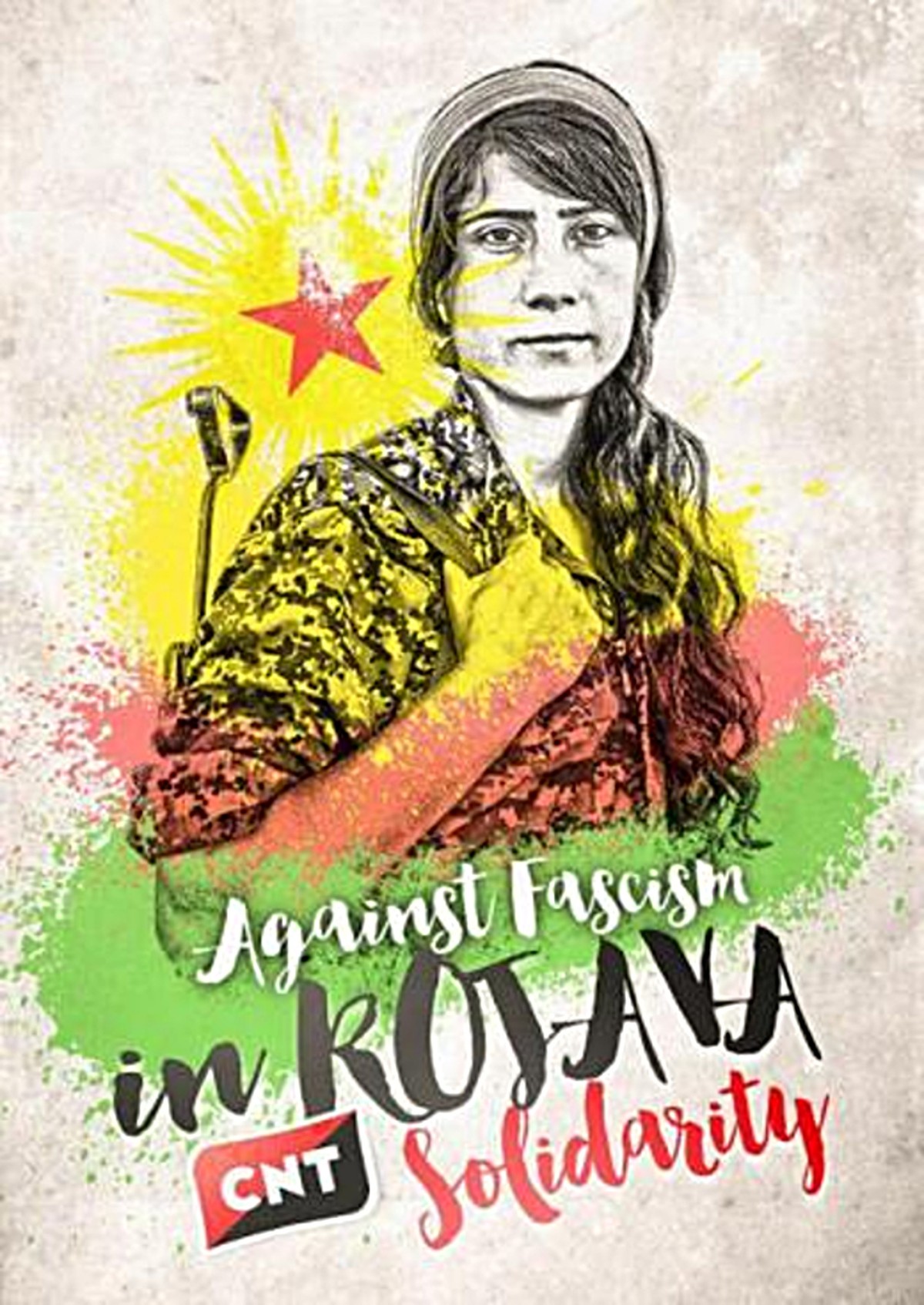 During the week of 11 to 16 February a hundred internationalists have been marching from Luxembourg to Strasbourg for the “Long March internationalist”, a march that has been organized for three years and has as its main objective to demand the freedom of Abdullah Öcalan.

The long marches are one of the fighting tools that have been applied for many years in the points where there is a large Kurdish population in the diaspora.

For three years, this tool has been internationalized and has become a meeting point for people from different parts of the world who support the Kurdish cause, a meeting point to share experiences and training, a meeting point and confluence between different tendencies and ideologies of the left, united under the slogan “Let’s fight against isolation. END_OF_DOCUMENT_TOKEN_TO_BE_REPLACED 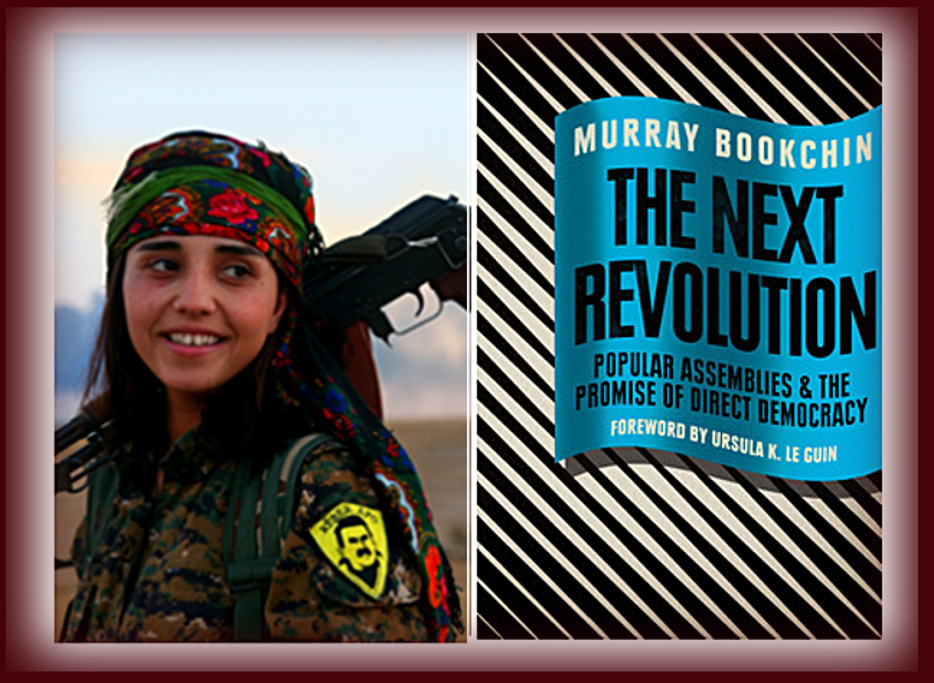 Murray Bookchin-The Next Revolution.   Popular Assemblies and the Promise of Direct Democracy-(2015).pdf

What Is Social Ecology   by Murray Bookchin   pdf

[PDF]The Rojava Revolution ANARCHISM IN THE MIDDLE EAST by the work of Murray Bookchin.
What we see in Rojava today is anarchism in practice. Each Canton subscribes to a constitution that affirms a society free from…..

Activist and prolific writer Janet Biehl has famously taken up the theory and practice of Municipal Anarchism, as theorized by her companion Murray Bookchin…..

from autonomies.org/ shared with thanks        The ongoing uprisings and revolution in Rojava and parts of Turkey are largely modelled on the ‘municipal anarchist’ blueprint of Murray Bookchin, whose works had been neglected and often rejected, even by anarchists as being a ‘sellout’ or ‘anti worker’ etc.

For decades the PKK marxist Kurdish guerillas had been resisting on behalf of the heavily repressed and ‘disappeared’ 18 million kurds in SE Turkey. Now they adopted municipal anarchism, dropped the demand for a new state and called a lasting ceasefire. END_OF_DOCUMENT_TOKEN_TO_BE_REPLACED 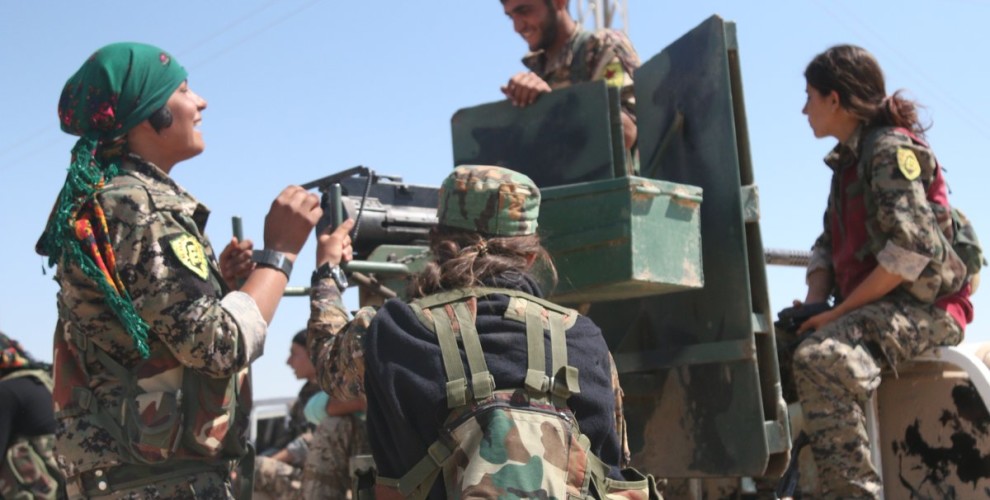 note: this blog thefreeonline.wordpress.com, has now been banned in Turkey with Dozens more pro Rojava and anti Fascist sites

The northern part of the city, including the hospital, has been conquered by the Syrian Democratic Forces, (SDF) after fighting throughout the week.

Thirty Islamists have died in the fighting. The Islamic State had been entrenched in the hospital and the mosque despite being non-combat sites. END_OF_DOCUMENT_TOKEN_TO_BE_REPLACED 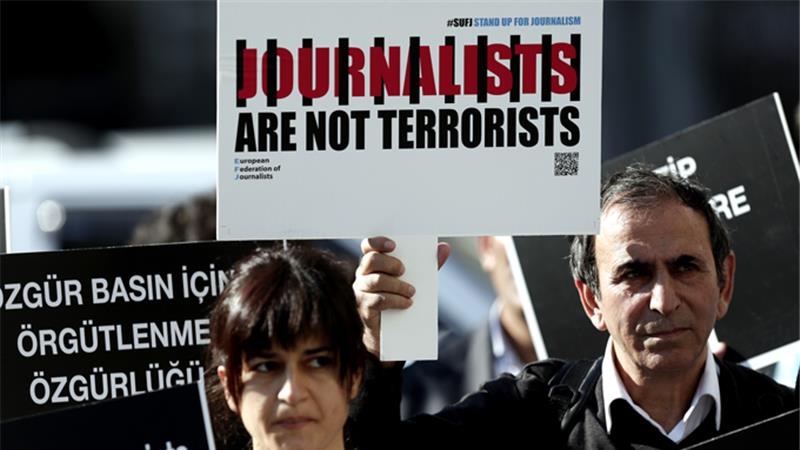 Below is a list of posts on thefreeonline which were cited by The Turkish prosecutors as evidence that the site should be banned. see  list of more banned sites further below. END_OF_DOCUMENT_TOKEN_TO_BE_REPLACED

Battles between hardened fighters from the Islamic State of the Levant (ISIL) continue around Deir-ez-Zor as units of the Syrian Democratic Forces (SDF) watch over ISIL’s recently-captured former capital city of Raqqa. Meanwhile, residents are taking steps to re-inhabit the Kobane Canton and other areas recently gained from the Islamic State

Unicorn Riot contributors visited the recovering cities of Kobane and Manbij in northeastern Syria as well as the grim frontline of armed conflict in Deir-ez-Zor, and obtained photographs from Raqqa. The following video presents various elements of life in Syria, such as displaced residents fleeing ISIL control, scoping out an ISIL holdout, clearing a booby-trapped building in Deir-ez-Zor, as well as rebuilding and creating new apartment blocks in Kobane.

With over half of the country’s population displaced during the last few years and a majority of the infrastructure destroyed, estimates place at least a $300 billion price tag on rebuilding Syria. The human death toll in the Syrian conflict in the past six years, as of early November, was estimated at exceeding 340,000. 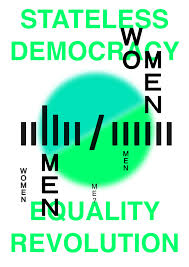 We don’t want a Kurdistan for Kurds, but a democratic federation for everybody,” they say. From Qamishli to Kobane, from Membij to Raqqa, this story describes the difficult implementation of a new political experience in Syria, despite the obstacles of a the war and a suffocating embargo.

A written version of this report can be found in the September 2017 issue of Le Monde Diplomatique: “Une utopie au coeur du chaos Syrian” and “Experiment in self-rule in Rojava” in their English-language version (partly reproduced  here below). a film made by Chris Den Hond and Mireille Court Duration: 45 min. Filmed in July 2017

Experiment in self-rule in Rojava

The spokeswoman for the campaign “Euphrates Anger” (Xezeba Firatê), Jihan Sheikh Ahmad, from the Yekîneyên Parastinê Yên Jinê (Women Defense Units, YPJ) campaign confirmed today the conquest of the old quarter of the Raqqa and the Darayeh district, to the West.

The control of the Old Quarter is a very remarkable advance as it was fortified by a historic wall and its narrow streets, complicated offensive operations.

Darayeh was closed at the beginning of the week and has progressed with street to street fighting. 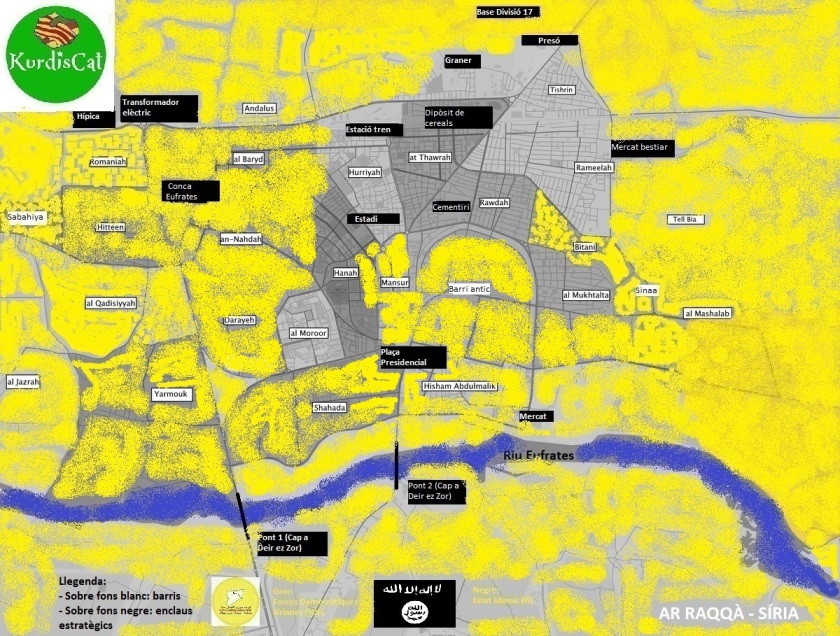 1st Sept 2017. map of Raqqa. yellow is SDF contolled. A Civilian/Military Council of all ethnic and religious groups and women has been set up to administer the city, its reconstruction, relief and refugee organisation, etc, The new administration uses the model of the Manbij Civilian Council, adopting many principles of the Rojava revolution of Democratic Confederalism, but without direct Kurdish control.

The Syrian Democratic Forces (SDF) have discovered networks of tunnels that were used by members of the Islamic State (IS). END_OF_DOCUMENT_TOKEN_TO_BE_REPLACED 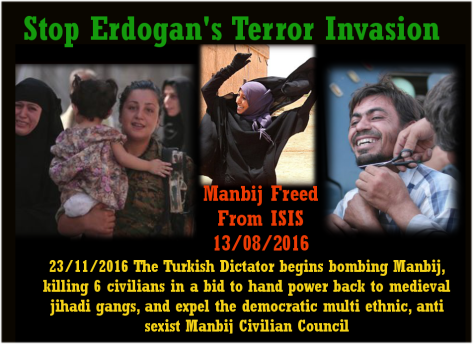 RAQQA – The Syrian Democratic Forces (SDF) General Leadership has told the International Coalition fighting the Islamic State (IS/ISIS/ISIL) that it will halt its operation on Raqqa if Turkey doesn’t cease attacks on Manbij according to claims.

In a statement via Telegram seen by KQ.com, the SDF, which recently launched the Wrath of Euphrates operation to liberate Raqqa from the IS, said it had told the anti-IS International Coalition it will halt its campaign on Raqqa and move its forces, which number 40,000, to Manbij if it does not stop the Turkish army’s attacks on liberated areas in and around Manbij in northern Syria.

Turkey and Free Syrian Army groups backed by Ankara have been attacking areas north of Manbij for the past two days.

Six civilians, including children, were killed tonight in Turkish airstrikes.

The SDF has accused Turkey of damaging the fight against IS in Syria.